History, finally, caught up with Labor in South Australia. After 16 years in office, and seeking a record fifth term, Jay Weatherill’s Labor has conceded to the Liberals.

While the results have not been finalised, the current state of play has Steven Marshall’s Liberals securing a majority. In the projected seat tally, the Liberals have won 24, Labor 18, independents three, and two seats remain undecided. This is a remarkable and unexpected result for a range of reasons.

Elections, as Nick Xenophon is discovering, have a cold, hard way of clarifying the minds of the voters.

Only two days before the election, most of the major betting agencies had far more favourable odds for a Labor win. Betting odds are sometimes seen as better predictors of election results than polls.

So, as we still pick over the results, what seemed to go right for the Liberals and so wrong for Nick Xenophon’s SA-Best team?

For the Liberals, while this was a win, it was not as resounding as, say, Mike Rann’s 2006 “Rann-slide”. Yet, it has been a result a long time coming, having won the popular vote in three of the past four state elections. Marshall’s campaign centred on him being a “safe” change-agent.

Marshall’s success lies in a range of incremental factors. First, he put to bed the historic divisions in the party. In a striking insight, he followed John Howard’s advice not to have votes at shadow cabinet meetings, but decide by consensus. New leadership, coupled with the misery of the long years in the wilderness, helped cement party unity.

Second, Marshall’s policy agenda has remained consistent and undramatic. When he launched his first 100 days in office, this was a smart relaunch of policies already well-known. It might have lacked a “wow” factor, but this has proven to be an asset. South Australians will now see cuts to household bills, a roll-out of a home battery scheme, and a push to deregulate working hours.

Third, the Liberals finally managed to make the most of the ammunition of Labor’s 16 years in office, especially the release of the Oakden report into abuse at the state-run mental health facility. The Liberals capitalised on this with a powerful campaign ad by the son of one of the victims, saying he “had enough” of Labor.

Yet, the story of the night was the deflation of the Xenophon SA-Best threat to the major parties. SA-Best looks set to secure just 13.7% of the vote, much lower than even lowered expectations.

The Xenophon vote fail to carry through – arguably for the following reasons.

First, there was overreach by Xenophon, perhaps mistakenly buoyed by the December Newspoll that not only suggested his party could hoover up a third of the vote, but also dangling the prospect of Xenophon as future premier. 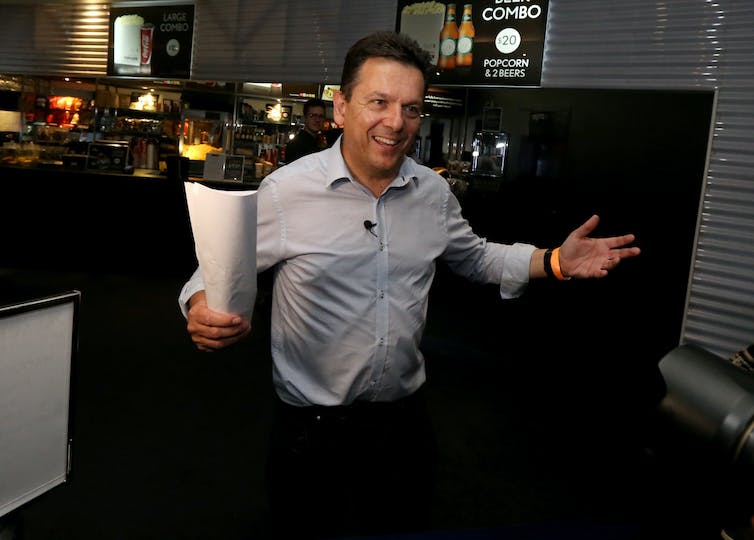 Nick Xenophon and SA-Best may have been too ambitious at this election, with a disappointing result. AAP/Kelly Barnes

Second, the SA-Best machine seemed ill-equipped and under-prepared for the campaign. Policy announcements came late in the campaign, giving the veneer of “policy on the run”.

The thinness of the SA-Best “machine” might prove a factor, as candidates were recruited late in the piece, and some did not seem quite ready for the media scrutiny, nor have enough time to embed themselves as the SA-Best candidate in their seats.

Voters also seem to have pulled back from the unclear positioning of SA-Best. After the initial honeymoon, SA-Best shifted from its traditional “watchdog” role – previously held by the Democrats – to presenting as a “kingmaker”. This brought additional scrutiny and expectation, pushing Xenophon onto the back foot.

Read more: As South Australia heads to the polls, the state is at a crossroads

In the final weeks of the campaign, Xenophon was playing to his familiar strength – gambling reform – but voters expected a more embracing policy agenda.

Finally, the Australian political system is undergoing change, but the institutional factors continue to suppress minor party challengers. The lower house, with its majoritarian electoral system, requires a strong performance by the next best-placed challenger. Three-into-two does not easily go.

It is notable too, that the election did not go as planned for other parties. The Australian Conservatives clearly failed to capitalise on their merger with Family First, with a drop in their vote share to 3.1%.

For Labor, the result is far from a disaster, and offers them the chance to rebuild, perhaps with a new leader in Peter Malinauskas.

Critically, Australian democracy seems more accelerated, with Liberal governments in Victoria and Queensland ejected after just one term. Marshall will need to move quickly to ensure his new government does not follow this new trend.