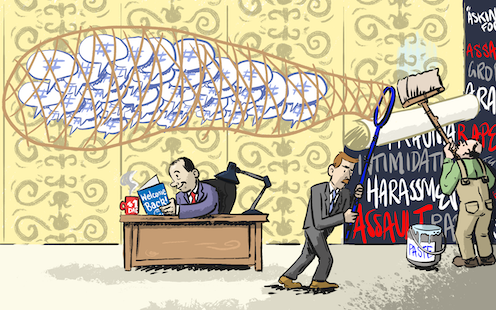 When news of the allegations against Hollywood producer Harvey Weinstein broke last October, it unleashed a torrent of emotion, especially on social media, offering permission to disclose current and past experiences of sexual harassment and assault. In an unprecedented quantum of use, it offered many angry and upset women accessible ways of venting often long-repressed feelings. It also gave rise to the #MeToo movement.

The volume and breadth of the responses raise many serious questions about the presumed “equality” gains of women. Over the past 70 years, after Simone de Beauvoir, Betty Friedan and Germaine Greer started debates that drove the second-wave feminist movement, we have achieved serious changes to our legal status, paid employment, and roles in public life.

However, the torrents of anger and complaints from #MeToo raise issues of whether gender powers have really been redefined, both locally and in most Western countries. Have we really made the essential cultural shifts that ensure women are no longer the “second sex”, living in worlds devised, defined and controlled by men?

The intentions of the second wave covered more than making women equal to men (in their terms, as were then defined). We intended to create the changes that allowed women and men to redefine what matters, to ensure we were no longer seen as primarily sexual or reproductive objects.

The current debate is just further evidence we failed to make the necessary power shifts. And macho male resistance to women’s power may also be increasing.

Read more: #MeToo and #TimesUp move off the red carpet and towards activism at 2018 Oscars

The evidence online and increasingly in reports and complaints, plus the intransigent domestic violence numbers, suggest current gender power imbalances are creating far too many damaging and unequal male-female relationships. Too many men, including those in power, express their ego, insecurities, problems and frustrations by dominating, bullying, controlling, undermining and embarrassing women.

The public appetite for equitable social changes seems to be receding, replaced with deteriorating social and political trust alongside growing nostalgia and tribalism. So, there appears to be little hope for more progressive power shifts to create more gender fairness.

There has been some optimism that the volume of protests and outpourings would generate public movements for change. But, like most forms of protest, they offer evidence of problems but fail to tackle the broader causes and how to fix them.

Part of the ongoing problem is the lack of serious cultural change programs that shift structures. The emphasis is still on using the law to handle individual complaints via either conciliation or charges.

Conciliation, when it works, does not allocate blame and is usually confidential, so is not a change agent. If charges are laid, the process often damages the complainant, as they are questioned and often shamed, even if they win. Many lose, and the process really becomes a social change deterrent.

There are multiple recorded problems with the individualised complaints model, as those accused seek to crush or shame accusers. A prime recent example of this is the Barnaby Joyce case and allegations of sexual harassment. When this accusation came to light, the personal details of the female complainant were published, and her desire for confidentiality was ignored.

There are many other stories of how those who seek individual complaints are punished: lost jobs, character assassination, being labelled as “difficult”, and so on.

While many of the reports are of serious crimes that need to be reported to police, others range from offensive and annoying to bad, crass, stupid behaviour. What they share are macho power assumptions and powerless feminised responses, all of which ensures they are inadequately tackled.

Accusations of crimes create often expensive court cases that cause damage to a complainant even if she wins. So, formal justice may offer little relief.

Yes, the system does punish those convicted as perpetrators, but it deters few, as individualised measures do not affect most of the wider societal groups that misuse their macho power.

Legal processes, even if based on rights, do not really effect the serious social change to attitudes or power that real gender equity will require. We need to address the social mores and related power structures that reinforce male power and support toxic masculinity.

How can we use the current explosion of evidence and outrage to trigger the needed changes?

We are still in early days of the “new” media as social change agents. Some positives: celebratory protests at award ceremonies and the wearing of supportive signs and colours have increased media coverage and the visibility of public support. There are discussions of increased resources for legal actions against perpetrators, and for more funding support to care for victims.

But these “solutions” are similar to those being pursued in the many campaigns against domestic violence, helping survivors. While these responses are needed in the short term, we must realise that they will not drive the cultural and gendered power changes we need. If “clicktivism” replaces wider political action and campaigns for change, we go backwards.

If we are serious about the abuse of gender-based power, we must look at its causes and make structural and cultural changes. We must overcome the serious, widespread gender-biased socialisation of boys and girls, in most cases long before they reach puberty.

Basic assumptions about gender roles still create beliefs about being an acceptable boy (stand up for yourself) or girl (be nice and read people’s feelings). These offer surefire paths to toxic masculinity and passive femininity.

These emerged in a recent BBC documentary, broadcast on the ABC. It showed seven-year-olds displaying very stereotypical views of preferring male over female when it came to confidence in skills and leadership. It also showed how removing school and home items that reinforced gender roles could reduce the different socialisations – in other words, it’s not genetic.

Given all of that, my concern is that #MeToo and related expressions of anger are failing to fix causes that increase macho-driven gender power imbalances. This means we need real, practical solutions to bridge the gender divide and stop supporting toxic masculinity.