Three political parties – the ALP, the Liberal Party and the National Party – dominate Australian politics. This dominance is particularly noticeable in the electoral contests for parliamentary lower houses, especially where these involve single-member electoral districts and electors cast a preferential vote.

In general, the vast majority of Australians vote for the three main parties. The dominance of the three parties’ representatives in state and federal parliaments reflects this.

Occasionally, developments in the party system can challenge this major party dominance. In 1955, for instance, the Labor Party split and the Democratic Labor Party (DLP) was created. During the 1980s and 1990s, the Australian Democrats party emerged, declaring it intended to “keep the bastards honest”. And in 1998, Pauline Hanson’s One Nation burst on the scene.

Neither the DLP nor the Democrats ever succeeded in winning a seat in the House of Representatives. One Nation also failed to win a lower house seat in the national parliament, although it did win seats in the Queensland parliament in 1998.

Here was prima facie evidence of the capacity of new parties to upset major party dominance over election outcomes. But this was to be overshadowed by another recurring theme – new parties quickly imploding due to weak organisation.

Within months, all the Queensland One Nation MPs left the party to form a new body (the City Country Alliance). At the next election, they all lost their seats.

Since then, other minor parties have similarly secured stunning lower house victories, only to be overwhelmed by internal instability.

Clive Palmer and his Palmer United Party secured a House of Representatives seat in 2013, after which the party fragmented.

In 2016, the Nick Xenophon Team’s (NXT) Rebekha Sharkie won the House of Representatives seat of Mayo. Fifteen months later, Xenophon resigned from the Senate to create yet another party (SA-Best) to participate in the recent South Australian state election. SA-Best appears to have failed in its bid to win a seat in the SA Legislative Assembly, and the rump of the NXT left behind in the Senate now has no leader and apparently no organisation.

Arguably the non-major party with the greatest impact in the party system is the Australian Greens. The party has secured House of Representatives seats on four occasions (a byelection win in Cunningham in 2002, and the seat of Melbourne in general elections in 2010, 2013 and 2016). This was matched by a significant increase in the number of seats held in the Senate, and by lower house success in state elections in Victoria, New South Wales, Queensland and Tasmania (albeit under a proportional electoral system).

It is stating the obvious to note that these minor party successes are the result of swings in voting behaviour at the expense of the major political parties. The total national primary vote cast for the main parties has been in decline.

But this in itself is no guarantee of inevitable change in the representational share between the major and minor parties, especially in single-member district electoral systems.

The shift of voter support away from the major parties has been variable and spread over a large number of alternative minor parties. In the 2013 and 2016 federal elections, more than 50 organisations registered as parties with the Australian Electoral Commission. Few of these parties polled over 1% of the vote. Only a handful polled over the 4% threshold to qualify for public funding. 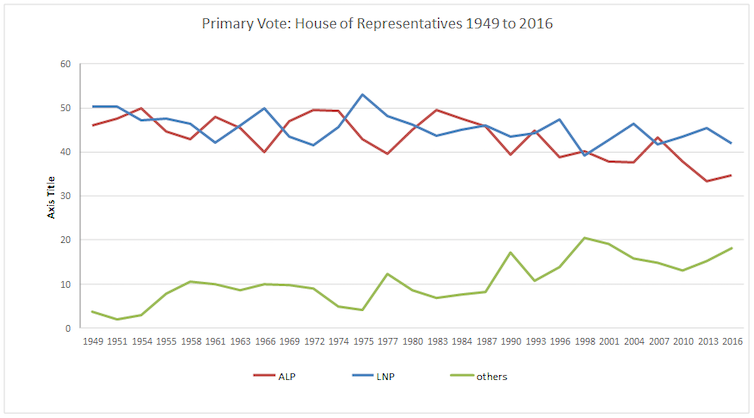 Once again, only the Greens – and, in the 2016 election, the NXT – have been capable of amassing a sufficient primary vote in a particular seat to have a chance of winning lower house representation.

But as the Batman byelection reminds us, even a primary vote approaching 40% does not guarantee victory. Bland references to declining support for the major parties tend to obscure just how difficult it is for minor parties to win lower house seats, especially if their electoral support is evenly spread over a wide range of districts.

By the same token, the increasing proportion of the Australian electorate casting a primary vote for a party other than Labor, Liberal or National is a significant development, and appears to be a recurring theme in recent elections.

It is also having a representational impact, but not in lower houses that use single-member electoral districts (that is, all Australian parliaments except Tasmania and the Australian Capital Territory).

Rather, the real locus of minor party impact is to be found in those parliamentary chambers elected under a proportional system. The SA-Best result in South Australia is an example of this: while his party failed to win a lower house seat, Xenophon’s latest venture did secure two seats in the proportionally elected Legislative Council.

The Greens might have suffered an adverse swing in the last state election in Tasmania, but still hold two seats in the House of Assembly.

Meanwhile, the minor parties have a significant impact on national policy debate by holding the balance of power in the Senate. This has been the reality in the Senate for some time.

The recent elections in Tasmania, South Australia and the byelection in Batman have left an impression that the advance of the minor parties has stalled, maybe permanently. This is not necessarily the case.

If the demographic patterns to the voting alignments in Batman are repeated at the Victorian state election on November 24, the Greens could win at least four lower house seats. Meanwhile, the current rate at which electors are voting for minor parties can still have significant representational consequences for proportionally elected chambers such as the Senate.

The sense of minor party failure associated with these recent election contests has been due in part to the tendency to make hyperbolic claims about their prospects in the first place.

The flipside of this is to guard against hyperbolically pessimistic conclusions on the basis of recent electoral events. Tasmania, South Australia and Batman were not good elections for SA-Best or the Greens (or, indeed, Rise Up Australia, the Jacqui Lambie Network or the Australian Conservatives), but that may have been due to the peculiarities of the particular elections.

There is a significant non-major party vote in the Australian system. The place to observe its impact is in the contest and representational outcomes for Australia’s proportionally elected upper houses, including the Senate.