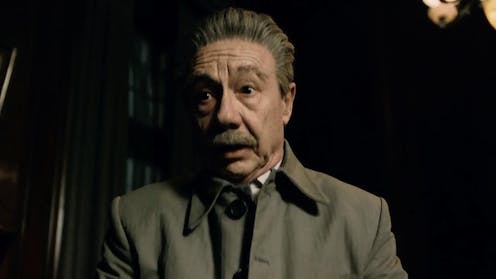 Armando Iannucci’s dark comedy The Death of Stalin, on general release in Australia from March 29, has caused controversy in Russia. After a preview in the Ministry of Culture in late January, a group of politicians and cultural figures – including the daughter of acclaimed WW2 military commander Marshal Georgy Zhukov, played in the film by Jason Isaacs – wrote an open letter to the minister calling the film “slander”, “denigrating”, and “extremist”.

They asked Culture Minister Vladimir Medinsky to withdraw permission for the film’s distribution in Russia. Putin’s man for historical topics happily complied. The one cinema that defied the ban was “visited” by police and dropped the movie from its program.

The film is a slapstick comedy about the power struggle after Stalin’s death, not a historical documentary. For example, the mass arrests and executions of 1937-38 have been moved to 1953 in the film for dramatic effect, forming the backdrop to Stalin’s death and the ensuing power struggle.

As far as historical films go, The Death of Stalin is more like Monty Python’s Life of Brian (1979) or maybe Quentin Tarantino’s Inglourious Basterds (2009) than Oliver Hirschbiegel’s historically accurate Downfall (2004). Nobody would dismiss these movies for not correctly depicting the historical Jesus Christ, or for misrepresenting the cause of Hitler’s death.

The ban is best explained by the Kremlin’s anxieties about its grip on power. In the recent presidential election, the government decided it needed not only 70% of votes, but also 70% voter participation to legitimise its rule. This was an ambitious target, suggesting there is a feeling in the Kremlin that holding power requires near-complete consent.

In reality there is barely a government in Europe as secure as Vladimir Putin’s. Independent polling has shown high approval ratings for the President, despite declining economic performance since 2013. The aggressive, Make-Russia-Great-Again stance in international relations has improved this popularity.

Team Putin left nothing to chance at the election. Various inducements were provided, from free buffets to games for the children. Free transport to polling stations helped to get the vote out. Stooges stuffed ballot boxes, intimidated election observers and at times removed them by force.

In a country that’s not a totalitarian dictatorship such desperate measures were reported instantly on social media. They made a mockery of the pretence to democracy and allowed the opposition, weak as it is, to claim that these were not legitimate elections.

Despite Team Putin’s effort, the result fell short. Not everybody, it turns out, loves Putin. While a record share (76.7%) and number of voters (56.2 million) elected the president, official voter turnout was 67.5%, the third lowest since the breakdown of the Soviet Union in 1991, although by international standards still a respectable result. In the victory celebrations, nevertheless, the target was no longer mentioned.

According to the open letter to Medinsky, The Death of Stalin is “slander on the history of our country, a malicious and absolutely inappropriate, so-called ‘comedy’, which is denigrating the memory of our citizens, who defeated fascism”. Moreover, the film was “extremist,” tried to “humiliate the dignity of the Russian (Soviet) person” and propagated discrimination “on the basis of social and national identity.”

This critique is missing the point. The Death of Stalin is not denigrating Russia or the Russians. It is denigrating power-hungry politicians, as one perceptive young Russian put it. She tasted the forbidden cinematographic fruit during a trip to Riga in Latvia, easily reached by bus from St. Petersburg:

I really liked the film, it’s insanely funny. But I immediately understood why it’s is now banned [in Russia] … I cannot remember that in our cinema the topic of power in general has been treated with such an intonation, the topic of change of power and the mess which accompanies it.

The leaders are shown as “completely inhuman,” she continued, interested only in power “they completely forgot about the people, about the country”.

She is right. The movie is a political satire targeting politicians, not ordinary people. It depicts the ruling clique as brutal buffoons, power-hungry, vulgar, and pathetic. They don’t care about the people they govern, whom they happily kill in droves if it suits their purposes. Even the great Marshal Zhukov – whose depiction by Isaacs is my personal favourite but could not have pleased the hero’s daughter – is violent, arrogant, and foul-mouthed.

According to the official Russian version of the second world war, Stalin was a great leader whose firm hand led “Russia” to victory in war. In the film, he is shown as both nasty and vulgar, indulging in late-night cowboy movies and encouraging inane pranks among his entourage. After his breakdown, his body lies in a puddle of urine and gets manhandled by his henchmen, elated at his demise and terrified he might recover. Eventually he has his scalp removed and his head cut open as part of the autopsy. That’s hardly a respectful treatment for a leader.

Putin is no Stalin, but their names are often mentioned in tandem. Putin is the longest serving Russian leader since Stalin. Stalin died in office at the tender age of 74. Putin will be 71 if he finishes his new term.

And if Putin is popular, Stalin is even more so. In recent times, he has become one of Russia’s favourite people, topping an independent poll that asked Russians to name “ten most outstanding persons of all times and peoples”. Putin tied with poet Alexander Pushkin in second place. Disrespect for Stalin and his henchmen implies to many disrespect to the Russian government, and hence disrespect to Putin and his team. It is no wonder the movie was banned.