The public fury that greeted the premeditated ball tampering orchestrated by Australian cricketers Cameron Bancroft, Steve Smith and other team members in Cape Town suggests the incident is seen as diminishing the personal integrity of every Australian citizen.

As a sport psychologist for more than 30 years, I have seen the best and the worst of athlete behaviour but even I felt personally affronted.

The conspiracy to cheat, casually hatched by the senior playing group over a lunch break, reverberates well beyond cricket and even sport itself.

Not only is the incident seen as tarnishing the baggy green and the legacy of Aussie test cricketers who went before, but more importantly it has removed any vestige of the country’s moral high ground.

Read more: Just not cricket: why ball tampering is cheating

No longer can we point the finger. No longer is breaking the rules something committed by others in the cricket world, such as Faf de Plessis and his Lollygate incident and Pakistan’s spot fixing scandal, rather than by us.

Bancroft was contrite in front of the world’s media and clearly willing to take his punishment. Smith’s response to getting caught red-handed was acute embarrassment followed by an affirmation that he remained “the right person for the job” of Australian cricket captain.

Their lack of awareness of the tidal wave of criticism that would break once the nation woke up to the news spoke volumes about the culture that pervades this team.

Criticism from abroad has been equally vicious. “This pious team who look down on everyone else … are getting their just desserts,” chimed in England spinner Graeme Swann, accusing the Australian team of longstanding double standards. 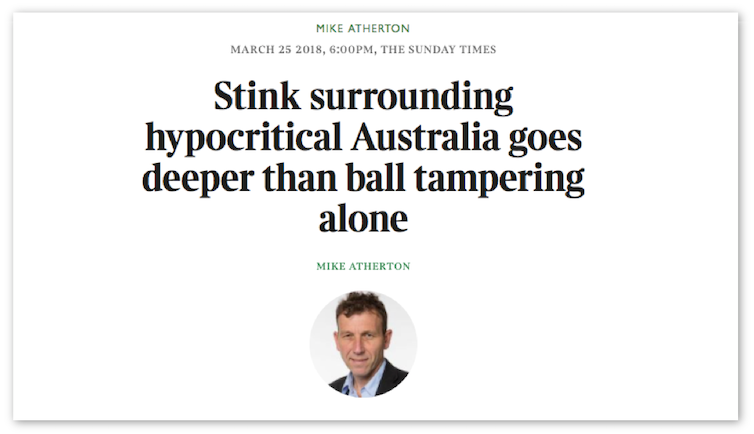 The Times/Screenshot How long before someone raises the spectre of a convict past to explain the fact that national representatives of Australia have been shown to be untrustworthy? Is the tough but fair image gone? As England’s sport psychologist in the 1993 Ashes series, I watched at close quarters as an Australian team featuring Border, Boon, Hayden, Healy, Hughes, Taylor, Warne, and the Waugh twins brushed England aside for a 4-1 victory. They played tough but fair cricket born of a glue-like culture that was as impressive as it was intimidating. They were local blokes made good, revered as the embodiment of values shared by the average Australian. My experiences in international sport have taught me the double-edged nature of strong team cohesion: a boost to performance but with potential to lead honourable people into questionable moral territory, both on and off the field. The empirical and anecdotal evidence of a positive relationship between team bonding and sport performance is unequivocal. The downside of creating a culture of unquestioning mutual support among a group of men desperate to win test matches is that a dual moral code can evolve. This sees them do things in the pursuit of victory that they would not contemplate in the real world. The ball-tampering attempt was seen as both dumb and unconscionable, given the sheer number of on-ground TV cameras. Yet it provides evidence of a warped moral code, rather than low IQ, on the part of Smith and Co. “It was worth taking the risk” seems to have been their mantra. Wrong! It is one of the clearest examples of the pedestal syndrome, whereby prodigiously talented young sportspeople are elevated in society to the point at which they lose sight of the difference between right and wrong. Even Prime Minister Malcolm Turnbull alluded wistfully to the fact that Australian cricketers are regarded more highly than any politician. Read more: What the stats say: is Steve Smith the second-best Australian cricket batsman ever? Smith was feted by the media and the public over the previous 12 months for his brilliant form, labelled the greatest batsman since Bradman. This is undoubtedly the highest pedestal available to the modern cricketer. But he now appears to believe that the almost sacred rules against ball-tampering apply only tangentially to him and the Australian team. With just a few remorseful words, delivered with apparent indifference to the magnitude of the act, Smith went from hero to zero faster than the disgraced Canadian sprinter Ben Johnson ran his drug-fuelled 100m. It’s not cricket “The cricketing gods have spoken loud and clear,” concluded Allan Border, as Australia crumbled to ignominious defeat by 322 runs in Cape Town. Never has the result of a test match mattered less. The apparent death of Australian integrity, forged through two centuries of nation-building, wartime heroics, and sporting achievement, has been greeted publicly with the early stages of a grief response. The shock and disbelief has been followed rapidly by white-hot anger that the custodians of values burned deep into the national psyche have betrayed the people of Australia. What follows is uncertain. The International Cricket Council has meted out its customary slap on the wrist for cheating in the form of a one-match ban, while Cricket Australia has stood down the captain for the final test match of the series. It has hardly been a draconian punishment so far. Long road to recovery Meanwhile, how do parents explain to their children that their heroes are dishonest and can’t be trusted? Will we see an exodus of participants from grassroots cricket? Read more: Video explainer: Bowling strategies and decision-making in cricket Discussion among pundits looking for explanations has already unearthed social injustice, the cult of celebrity, mega salaries, A$10 million homes, first-class travel and inflated entourages as contributing to the moral failings of our national representatives. The term “that’s just not cricket”, once a condemnation of anything with even a whiff of moral turpitude, is now surely destined to become something of a compliment. It’s a long road back to respectability for the Australian cricket team, which may have to start with root-and-branch changes to its culture from the top down. As for forgiveness from the Australian public, that may take longer still.