When Captain Cook embarked on his voyages across the world in the 18th century he encountered Indigenous peoples throughout the Pacific, including those who lived in the lands that would become the nations of Australia and New Zealand. While we know plenty about how Cook saw the world thanks to his and others’ records, the perspectives of the Indigenous people he met have often been sidelined in history.

Māori artist Lisa Reihana’s immersive wall video Emissaries, currently on show as part of the Perth Festival, is a stunning re-enactment of some of these encounters that brings the Indigenous participants to life. Using Indigenous actors and performance techniques, Reihana reveals the other side of these encounters.

Read more: NGV's Colony is a bold attempt to confront Australia's colonial past, but divisions remain

Emissaries is inspired by a magnificent wallpaper produced in France in 1805, intended to plunge bourgeois Europeans into the newly-discovered sights and cultures of the Pacific. Entrepreneur Joseph Dufour, with painter Jean-Gabriel Charvet, produced the largest panoramic wallpaper of their time, titled Savages of the Pacific (Les Sauvages de la Mer Pacifique). It was inspired by exciting new discoveries in the Pacific, particularly those made by Cook, which captured the imaginations of many Europeans. In our own time, the discovery of life on other planets might spark such excitement and the expansion of horizons.

I was really inspired to create a work that kind of spoke back through time. Just kind of readdressed some of the look of the wallpaper and certainly to put a stake in the ground. And say yes Indigenous people are strong and yes we are still here.

On Cook’s first great Pacific adventure (1768-1771) he travelled with botanists Joseph Banks and Daniel Solander, surviving disease, shipwreck and encounters with a range of Indigenous peoples. Some, to Cook, apparently manifested Jean-Jacques Rousseau’s arcadian vision of “noble savages” living in a tropical paradise.

On Cook’s third and final voyage (1776-1779) he “discovered” the Hawaiian Islands. At first welcomed by the Hawaiians, who were fascinated by the Europeans’ ships and their use of iron, Cook then left for almost a year while he searched for a northwest passage from the North Atlantic to the Pacific. On return, coincidentally midway through a festival dedicated to the fertility god Lono, the British sailors were welcomed as gods. 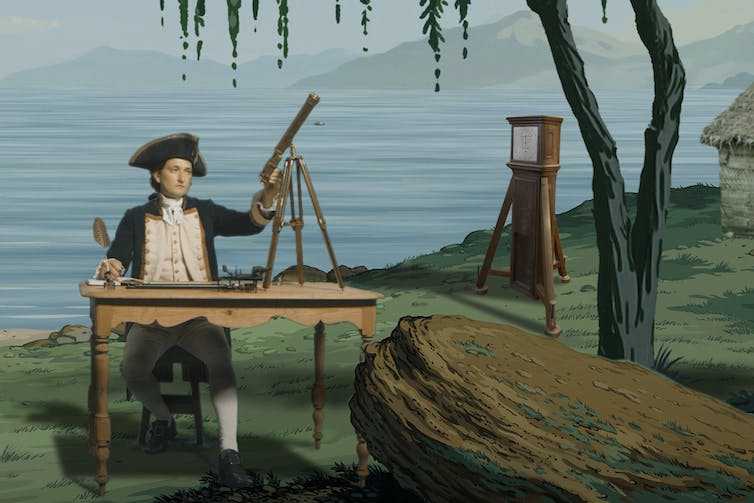 But after departing, damage caused by rough weather necessitated their return just a week later. This time, their reception was unfriendly and violent, and the theft of a small cutter prompted an angry confrontation in which the Hawaiians overwhelmed the British and killed Cook.

In her staging of this and many other encounters, Reihana’s video peoples the magnificent painted settings with living Maori, Hawaiian, Cook Islands, Samoan and Aboriginal actors alongside Western heroes such as Cook, Banks and Solander. Through extensive collaboration with different Pacific islander communities, combined with historical research, Reihana and her partner James Pinker created a soundtrack of traditional singing, snatches of dialogue, and classical music such as Bach.

Excerpt from the video Transit of Venus [Infected], part of Emissaries.

Emissaries is a form of visual re-enactment – and like all re-enactments, it is written in the past conditional: it asks, what if we had understood both sides of the exchange? What if these meetings had been conducted between equals, in full acknowledgement of the richness of their different cultural traditions?

Imperialism, including Britain’s colonial ambitions, relied upon the idea that all ideas, energy and progress emanated from Europe. Historians have now challenged this view and the perception that the colonies and Indigenous people always lagged behind. 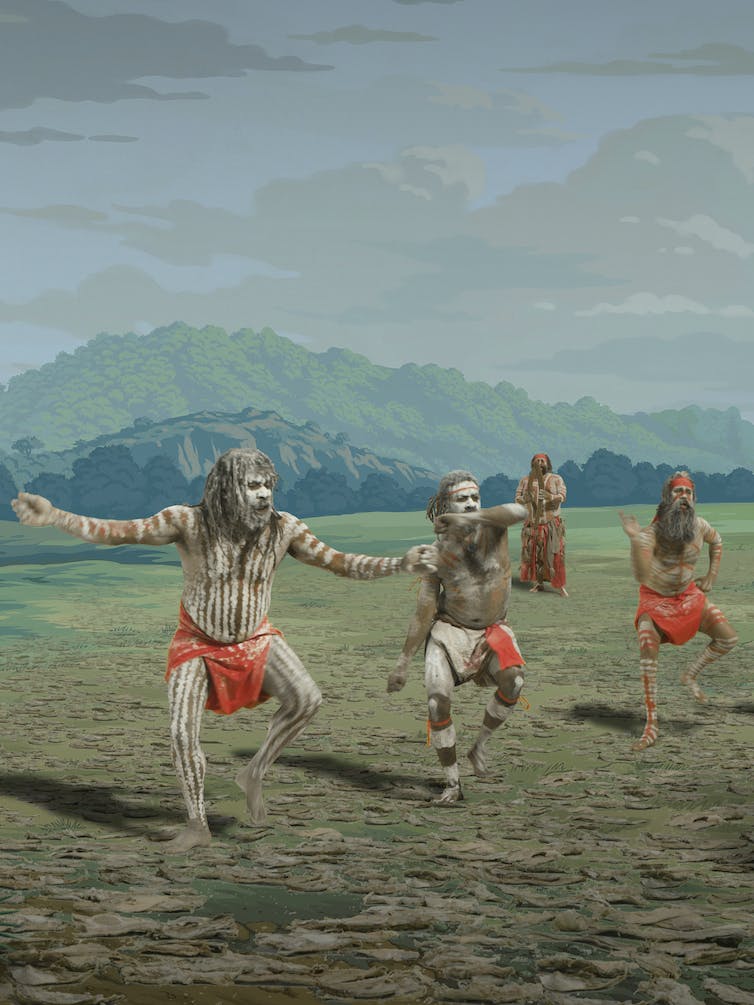 In Reihana’s encounters our view is no longer governed by British assumptions or interests. By bringing alive the Indigenous actors, we are shown their world view – their side of the beach – and they move from being props to playing main parts. The death of Cook can be seen as a terrible misunderstanding rather than a brutal attack by savages, a tragedy to be respectfully and ceremoniously acknowledged, commemorated, mourned.

Read more: How picture boards were used as propaganda in the Vandemonian War

Reihana translates these encounters into the mode of traditional performance: through rhythm, music and ritual these well-known events are imbued with Indigenous meaning. She slows down the pace of these events from action-packed Hollywood drama to gracious ritual. The amazing soundscape governs our emotional response – for example when a Hawaiian sings over Cook’s dead body, violence is transcended by spirit and recognition.

As in many Indigenous cultures, Reihana uses performance as a way of telling a shared story and giving the past meaning in the present. In the present, Emissaries’ irruptions of the past offer haunting counter-narratives to our stories of national progress that rely on one-sided views of Western dominance and progress.

EMISSARIES is showing at the John Curtin Gallery until 29 April.