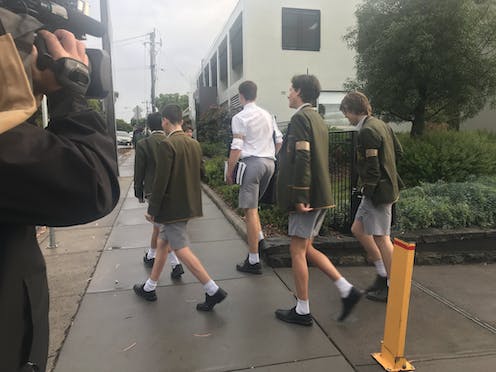 Recent reports of tensions in Melbourne’s Trinity Grammar school are indicative of the pressure elite schools are facing to excel in all areas of education.

Trinity’s students, parents and alumni are seething after the sacking of longstanding deputy headmaster Rohan Brown for cutting a student’s hair before school photos. But the anger is aimed less at the haircut than what the sacking represents. A new leadership team has reportedly made wholesale changes to the school since 2014, which have focused on improving ATAR scores while sidelining a culture committed to character-building and social justice.

This has caused an exodus of teachers in the last few years, as well as complaints from parents and alumni, which came to a head at the end of last year. This year, students held protests on campus, while parents and alumni waged a concerted campaign to oust the principal and his board. Legal action is now being pursued.

Read more: Your ATAR isn't the only thing universities are looking at

Such events capture the tension at the heart of elite schooling. Each city has its own scrum of these high-fee schools, which are informally tiered according to cost, results, tradition and location. With the expanding market for private schooling, there is increased pressure on schools, especially those playing second row, to prove and improve their prestige.

This is done through a combination of fancy buildings, high results, community-service programs and other innovative offerings not available in the public system.

A similar scenario to Trinity’s played out last year in Queensland when secret plans to merge four elite private schools were leaked. These revelations led to outrage among parents, staff resignations and, ultimately, damage control on the part of the schools (Somerville House, Brisbane Boys College, Clayfield College and Sunshine Coast Grammar School).

Leaders of elite schools make economic decisions about education. This means the more easily identifiable markers of status, like ATAR scores, are sometimes privileged over less tangible ones, like student well-being, community service and the more important issue of educational equity. The decision-makers in this economy of eliteness must weigh up where resources are best spent.

Read more: Who's your daddy? Myths of merit and elite education scholarships

For school management, this means business decisions are made about investing its capital to ensure future returns. The choice to emphasise results will improve the school’s ability to sell itself to prospective families keen to enter the elite school market. But it might come at a cost to the holistic education and extracurricular offerings many clients actively seek.

For clients, namely parents, the decision to send a child to a high-fee school is usually based on either tradition or aspiration, or both. Forking out A$20,000 to $30,000 each year is a significant investment. The assurance sought in the short term is stable governance and excellent academic results. But there is also an implicit desire for the child to enjoy learning, develop a strong work ethic and form firm networks that will last a lifetime.

If parents see this investment being at risk, it’s likely they’ll protest or go somewhere else.

Elite schools are now constantly proving their worth, and this is seen globally. What’s interesting about the cases above is that the parents, many of whom are alumni, remain vested in the individual school’s culture. This reveals an emotional aspect to the system that both supports and runs counter to the economic rationale followed by their managements.

The Trinity case is significant insofar as it shows that parents understand that education’s worth is measured in more than high marks.

Elite schools are unlikely to change their ways, however. The rivalry between high-fee schools for academic and sporting results forms part of their identity in a way that religious divides used to. Market logic now extends this into competition for student enrolments.

If a leading high-fee institution decided to no longer play this game, the risk would be too high. There are enough alternative schools for well-heeled families to seek out.

Parents could be the true arbiters of change. It’s feasible that elite-school stakeholders insist on lower fees and more inclusive models. Or that they leave the high-fee schools out of commitment to constructing an equitable education system. But apart from a few isolated complaints and flare-ups, demand still extends in the opposite direction.

As so often is the case, we’re back to economics. Not in the limited measurable sense of ledger sheets and ATARs, but rather in its applied cultural meaning – the purpose behind investing in every child’s education. In Australia, and elsewhere, the pressure on elite schools trickles down to us all. And the true cost of this thinking is entrenched social inequality.