In the 1970s, art history was being rewritten by a generation of young scholars, including TJ Clark and a host of other neo-Marxists, who argued that painting was more than just a means of arranging colours on the surface of a canvas for aesthetic purposes. Art, they said, was also a mirror of society and of its political aspirations. By the turn of the century, this view had become the standard way of analysing movements such as Impressionism.

Colours of Impressionism: Masterpieces from the Musée d’Orsay, at the Art Gallery of South Australia, moves away from this model and back towards a more traditional analysis largely based on colour. The exhibition includes more than 65 paintings from the famed Parisian museum curated by two of its staff – Marine Kisiel and Paul Perrin. There have been numerous Musée d’Orsay exhibitions in Australia, at least five, the most notable of these the impressive The Impressionists: Masterpieces from the Musée d’Orsay at the National Gallery of Victoria in 2004.

Although these exhibitions are an important part of the French gallery’s revenue stream and many are drawn from the back room collection, the selection of work for the Adelaide exhibition is a good one. A number of key pieces have been removed from the walls of Musée d’Orsay’s permanent display and at least 50 of the paintings have never previously been exhibited in Australia. 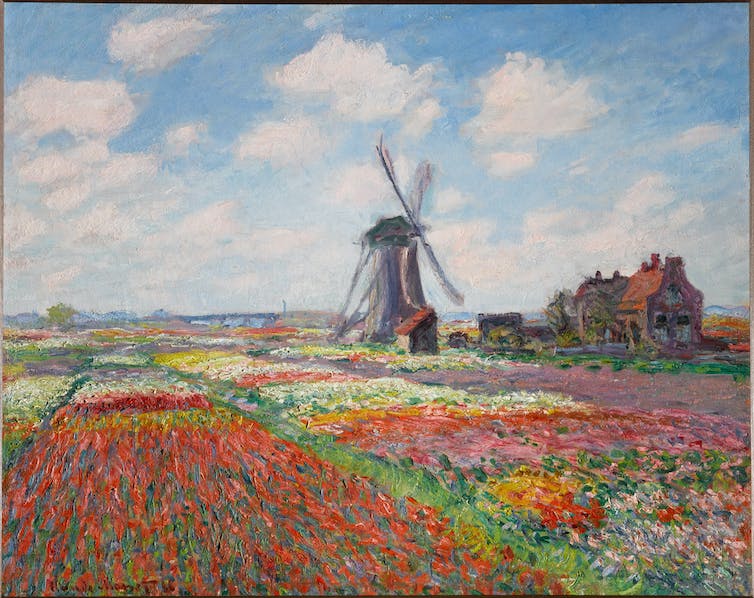 The exhibition is built around the formalist notion that the development of Impressionism can to some extent be interpreted as a development of colour theory. As the French painter Maurice Denis famously observed in 1890, “Remember that a painting – before being a battle horse, a nude woman, or an anecdote of some sort – is essentially a flat surface covered with colours, put together in a certain order”.

Colours of Impressionism starts with the work of the French realist painter Gustave Courbet who rejected the tinted marble-like surfaces of the French academic tradition and introduced generous amounts of black to his palette. He also played with white snow landscapes articulated with blue shadows.

At the time, a number of significant writers published on colour theory (which attempted to define and mix colours), including Johann Wolfgang von Goethe, Michel-Eugène Chevreul, M.E. Brücke and Hermann von Helmholtz, all of which enhanced the science of seeing colour. Colour theories, together with the experience of Japanese prints and the manufacture of pigments in tubes and the production of new chemical colours, were some of the key ingredients for the formalist concerns with colour for the Impressionist painters. 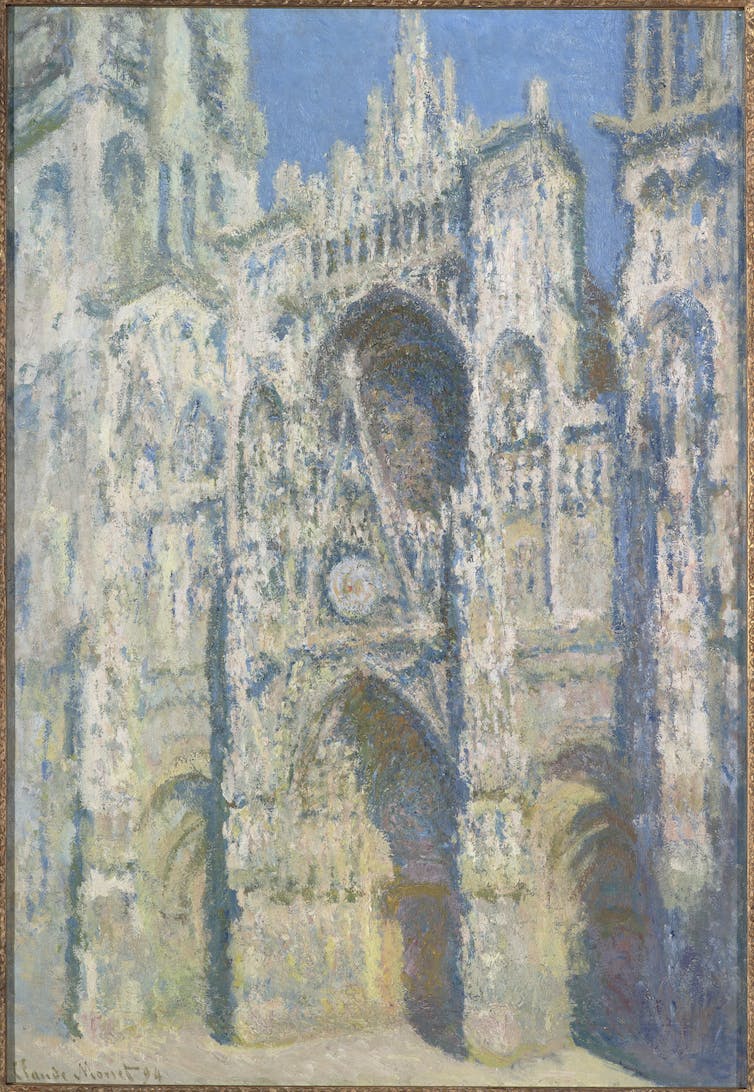 The exhibition, in quite a didactic manner, arranges the paintings in separate rooms examining their relationship to the treatment of colour. Following two rooms of preludes to Impressionism, the core of the exhibition consists of five sections: Painting light; Greens and blues; the Impressionist palette; From Delacroix to Neo-Impressionism and Rose and violet, which could also be called the aftermath of Impressionism.

Here, some painters like Renoir retreated into a classicising museum-like art, while others like Cézanne abstracted the image and sought out a restricted palette. Monet continued to push Impressionism to its logical conclusion, with seas of colour applied to a single object, such as the façade of the Rouen Cathedral caught at different times of day under different conditions of light. 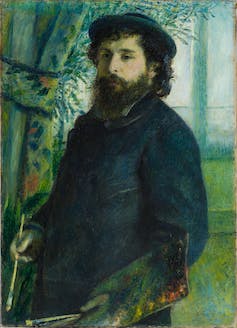 The exhibition sparkles with subtle but wonderful associations that create the feeling of comradeship amongst a small band of friends exploring associated concerns in their art. For example, if one examines carefully Auguste Renoir’s portrait of Claude Monet in 1875, the background is Monet’s house and garden at Argenteuil. On the wall next to it is Monet’s painting Un coin d’appartement (A corner of the apartment) 1875, where the same foliage pinpoints the same location.

The May triptych brings together three small canvases, all painted in about 1872, but by three different artists: Alfred Sisley, Camille Pissarro and Monet. It catches a moment in time when the three friends were working on parallel trajectories. The paintings are sketchy, rather than polished, and finished in the academic sense. Colour is applied in small dabs and not in blended colour masses and they are all landscape scenes executed with a palette stretched towards the ultraviolet end of the colour spectrum.

From this early unity of techniques and vision, within a decade or so, the artists moved in their own directions to create distinctive styles. Only Monet continued to adhere to the earlier ideas of Impressionism.

How convincing is this attempt to tell the history of the development of Impressionism as part of a history of the development of colour theory? What the exhibition does demonstrate, and what we have always known, is that the Impressionists and Neo-Impressionists were obsessed with light and colour and actively combined empirical observation with a somewhat half-baked understanding of the science of colour perception. They devised techniques for working “en plein air” (working outside) and for working in series to capture the changing conditions of light.

Once the artists had mastered the techniques of colour application, they seemed bored to a standstill. Colour was absorbed into their general toolkit and they moved in different directions. Monet, as always, was the odd painter out and continued with his love affair with colour until the end of his life.

The exhibition comes to Adelaide after its initial showing at the National Gallery of Singapore and is being exhibited in the Elder Wing, the 19th Century space in the Adelaide gallery as you enter from North Terrace, which has been refurbished for the exhibition. This exhibition also appears to be the swansong for gallery director Nick Mitzevich before he takes up his new role as director of the National Gallery of Australia in Canberra in June 2018.

Colours of Impressionism: Masterpieces from the Musée d’Orsay is at the Art Gallery of South Australia until July 29 2018