In broad terms, “opera” denotes some combination of music, drama and spectacle in which some, if not all of the words are sung. Damien Ricketson’s new theatre work, The Howling Girls, which premiered on Wednesday, 28 March at Carriageworks in Sydney, has no recognizable words and certainly stretches generic boundaries.

Can it be called an opera? But what’s in a name? In the end it doesn’t matter if the work itself sustains the interest of a theatre audience. Ricketson observes: “There’s no libretto, there’s no story and no orchestra. So I’ve already been challenged once as to whether I can call it an opera.”

The impetus for the piece is described by Susan Faludi:

In the weeks following the terrorist attacks on the World Trade Center … five gaunt teenage girls had arrived separately at a Manhattan hospital complaining of identical symptoms. They were wasting away because they couldn’t ‘swallow’ … All five believed that some debris or body part from the destruction of the towers had lodged in their throats and produced the symptom. The surgeon who examined them found no obstruction, and ‘needless to say, no body parts’.

The terrorist attack has generated a wide variety of artistic responses, including John Adams’s memorable musical work, On the Transmigration of Souls. Howling Girls consists of one vocal soloist, the redoubtable contemporary music specialist, soprano Jane Sheldon, and a chorus of six teenage girls from the performing arts company, The House That Dan Built. The music is directed by Jack Symons from a keyboard and includes some very non-traditional instruments such as Aztec death whistles, and a theremin played by Symons. In addition, there is a vast range of electronic enhancements overseen by sound designer, Bob Scott. 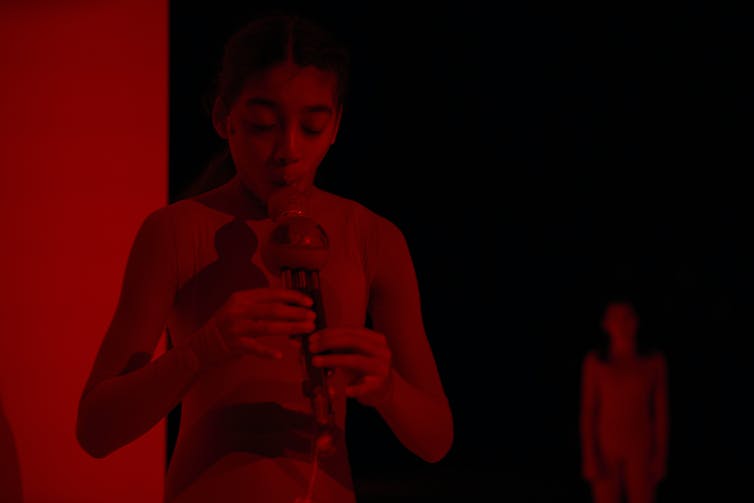 The opera’s subject matter is the female voice, or lack of voice, or constricted voice, as a result of trauma. Ricketson observes: “I was quite interested in the type of vocalisations that we make in heightened states of distress or emotional arousal such as weeping, moaning, howling. All of those kind of sounds that are not words but definitely carry strong meaning.”

This is actually not that far from more traditional opera in which the words are often all but unintelligible and we gather much of the “meaning” through the sheer materiality of the human voice, often pushed to its extremes. We viscerally respond to Mozart’s Queen of the Night’s aggressive, and wordless coloratura - words lose all semantic meaning and become purely a vehicle for sound, which in itself has intrinsic “meaning”.

The Howling Girls suggests the operatic mad scene, where the use of the female voice in 19th century opera reflects many contemporary male composers’ ambivalent attitudes to women, based on the concept of hysteria as means of characterizing or dismissing female behaviour.

The work starts with a low electronic rumble and then a lengthy period of the sound of laboured breathing before the first voice emerges. Jane Sheldon’s mammoth opening “aria”, well over half an hour, includes a combination of singing while inhaling and exhaling, rapidly alternating between chest and head voice, often creating a choked, constricted sound – a “proto-language”. The electronic enhancements allow us to almost feel that we are in the throats of her and the other singers. 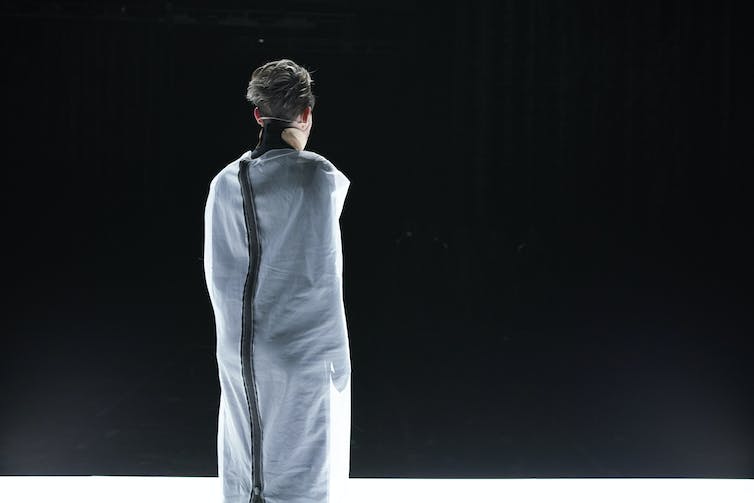 Visually and aurally, The Howling Girls is disturbing. Zan Wimberley

The performance is directed by Adena Jacobs who admits that the work is both challenging for performers and audiences alike. The set is an ubiquitous black box, which for the first half hour remains in almost total darkness. A figure gradually emerges, lying on a plinth with a ray of light, reminiscent of a medical scanner, passing over her. Finally Sheldon comes to the front of the stage in a blaze of light. Visually and aurally the work is disturbing, none more so than the moment when the six veiled girls appear to taunt Sheldon by sounding the death masks.

The 70-minute piece will certainly not be to everyone’s taste in the expectation of attending an opera. However, much credit must accrue to one of Australia’s most innovative opera companies, the Sydney Chamber Opera, and to all involved. It is a bold experiment in how the human voice, singly and collectively, can be stretched almost to breaking point, while providing a vivid investigation of responses to trauma.

It will find an audience interested in the outer reaches of art music and music theatre; but one would have to conclude that like so many new works, it will probably not enter into any kind of contemporary operatic repertory. So catch it while you can, it’s well worth it.