The women screamed as the huge waves crashed loudly on the wooden deck. Horrified, they watched the foaming torrent wash away their blankets. Many dropped to their knees, praying for the violent rocking to stop. The sea raged around them as the wind whipped up into a frenzy, damaging all but one of the heavily loaded ships.

The severe storm was yet another taste of the ferocious weather that slammed the First Fleet as it made its way across the Southern Ocean in December 1787. Now, after an eight-month journey from England in a ship riddled with death and disease, the passengers’ introduction to Australia was also far from idyllic. The unforgiving weather that greeted the First Fleet was a sign of things to come. More than once, intense storms would threaten the arrival of the ships and bring the new colony close to collapse.

So how did the early arrivals to Australia deal with such extreme weather? Have we always had a volatile climate? To answer these questions, we need to follow Australia’s colonial settlers back beyond their graves and trace through centuries-old documents to uncover what the climate was like from the very beginning of European settlement. By poking around in the settlers’ old diaries, letters and newspaper clippings, we can begin to piece together an idea of what the country’s climate was like long before official weather measurements began.

When the British sailed into Australian waters, they had no idea of what awaited them. Eighteen years before the arrival of the First Fleet, Captain James Cook had barely spent a week in Botany Bay. He didn’t even stop in for a quick stickybeak at Port Jackson, the settlement site that eventually came to be known as Sydney Cove. HMS Endeavour had only briefly skirted past modern-day Sydney Harbour in May 1770, so the British knew next to nothing of the land, its climate or its people. Perhaps they expected that life would resemble their other colonial outposts like India, or an undeveloped version of England. With enough hard work, surely the land could be tamed to support their needs. But when the First Fleet sailed into Sydney Cove, they unknowingly entered an ancient landscape with an unforgiving climate.

Even before Governor Arthur Phillip set foot in Botany Bay, violent storms had battered the overcrowded ships of the First Fleet. During the final eight-week leg of the journey from Cape Town to Botany Bay, the ships had sailed into the westerly winds and tremendous swells of the Southern Ocean. Ferocious weather hit the First Fleet as it made its way through the roaring forties in November–December 1787. Although the strong westerlies were ideal for sailing, conditions on the ships were miserable. Lieutenant Philip Gidley King described the difficult circumstances on board HMS Supply: “strong gales … with a very heavy sea running which keeps this vessel almost constantly under water and renders the situation of everyone on board her, truly uncomfortable”. Unable to surface on deck in the rough seas, the convicts remained cold and wet in the cramped holds.

As Christmas approached, King noted the surprisingly chilly conditions off the southwestern coast of Western Australia: “The cold is in the extreme here as in England at this time of year, although it is the height of summer here.” Aboard HMS Sirius, Judge David Collins wrote about how the crew tried to celebrate in “mountains high” seas, to no avail. On New Year’s Day 1788, Arthur Bowes Smyth, a surgeon aboard the Lady Penrhyn, described how the sea poured into his cabin:

Just as we had dined, a most tremendous sea broke in at the weather scuttle of the great cabin and ran with a great stream all across the cabin, and as the door of my cabin happened not to be quite closed shut the water half filled it, the sheets and the blankets being all on a flow. The water ran from the quarterdeck nearly into the great cabin, and struck against the main and missen chains with such a force as at first alarmed us all greatly, but particularly me, as I believed [the] ship was drove in pieces. No sleep this night.

In a letter to his father, Sirius crew member Newton Fowell described the terrible weather that greeted the new year: “This year began with very bad tempestuous weather, it blew much harder than any wind we have had since our leaving England.” As the atrocious conditions continued, the First Fleet was forced to slow down to prevent the ships’ sails from tearing. Earlier in December 1787, the Prince of Wales had lost its topsail and a man washed overboard in what a sailor on the Scarborough described as “the heaviest sea as ever I saw”.

Captain John Hunter described how the rough seas made life on the Sirius very difficult for the animals on board:

The rolling and labouring of our ship exceedingly distressed the cattle, which were now in a very weak state, and the great quantities of water which we shipped during the gale, very much aggravated their distress. The poor animals were frequently thrown with much violence off their legs and exceedingly bruised by their falls.

It wasn’t until the first week of January 1788 that the majority of the First Fleet sailed past the southeastern corner of Van Diemen’s Land, modern-day Tasmania. As his boat navigated the coast, surgeon John White noted: “We were surprised to see, at this season of the year, some small patches of snow.” The fleet then began the 1,000-kilometre struggle up the coast of what would soon be called New South Wales, against a strong headwind and the East Australian Current. Newton Fowell wrote:

The wind variable and weather dark and gloomy, with a very troublesome high sea. About two o'clock p.m. we had one of the most sudden gusts of wind I ever remember to have known. In an instant it split our main-sail; and but for the activity shewn by the sailors, in letting fly the sheets and lowering the top-sails, the masts must have gone over the side… Fortunately for us the squall was of short duration, otherwise the ships must have suffered considerably from the uncommon cross sea that was running; which we had found to be the case ever since we reached this coast.

According to Bowes Smyth, faced with a “greater swell than at any other period during the voyage”, many of the ships were damaged, as were seedlings needed to supply the new colony with food. Bowes Smyth continued:

The sky blackened, the wind arose and in half an hour more it blew a perfect hurricane, accompanied with thunder, lightening and rain… I never before saw a sea in such a rage, it was all over as white as snow … every other ship in the fleet except the Sirius sustained some damage … during the storm the convict women in our ship were so terrified that most of them were down on their knees at prayers.

Finally, on January 19, the last ships of the First Fleet arrived in Botany Bay. But after just three days there, Phillip realised that the site was unfit for settlement. It had poor soil, insufficient freshwater supplies, and was exposed to strong southerly and easterly winds. With all the cargo and 1,400 starving convicts still anchored in Botany Bay, Phillip and a small party, including Hunter, quickly set off in three boats to find an alternative place to settle. Twelve kilometres to the north they found Port Jackson. 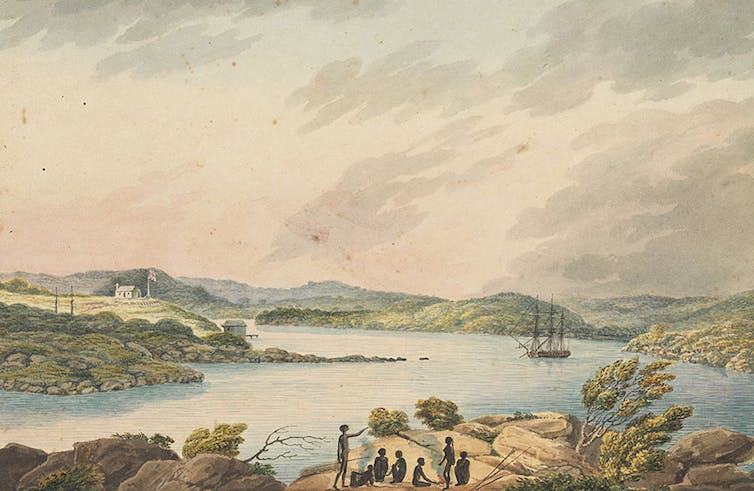 View of Dawes point at the entrance of Sydney Cove, described by one voyager as the ‘finest and most extensive harbour in the universe’. Joseph Lycett, State Library of New South Wales

When the Endeavour had sailed past the location 18 years earlier, Cook had simply noted: “About two or three miles from the land and abreast of a bay or harbour wherein there appeared to be safe anchorage, which I called Port Jackson.” Early in the afternoon of the second day of their exploration, Phillip and his party discovered a large sheltered bay with a freshwater stream flowing into it. As Phillip later relayed to England, they “had the satisfaction of finding the finest harbour in the world”. It was decided that their new home would be here, not Botany Bay. It was named Sydney Cove after Lord Sydney, the home secretary of England at that time. John White was even more blown away by Port Jackson, gushing that it was “without exception, the finest and most extensive harbour in the universe”.

On 23 January 1788, Phillip and his party returned to Botany Bay and gave orders for the entire fleet to immediately set sail for Port Jackson. But the next morning, strong headwinds blew, preventing the ships from leaving the harbour. On 25 January, King wrote: “The wind blowing strong from the NNE prevented … our [the Supply] going out,” adding that they were obliged “to wait for the ebb tide and at noon we weighed and turned out of the harbour”. In the meantime, the rest of the fleet was still trying to sail out of Botany Bay. A surgeon, George Worgan, wrote about “the wind coming to blow hard, right in to the bay, the Sirius and the transports could not possibly get out”. A huge sea rolling into the bay caused ripped sails and a lost boom as the ships drifted dangerously close to the rocky coastline. According to Lieutenant Ralph Clark:

If it had not been by the greatest good luck, we should have been both on the shore [and] on the rocks, and the ships must have been all lost, and the greater part, if not the whole on board drowned, for we should have gone to pieces in less than half of an hour.

Finally, as Bowes Smyth described, the ships left the bay: “With the utmost difficulty and danger [and] with many hairbreadth escapes [we] got out of the harbour’s mouth … it was next to a miracle that some of the ships were not lost, the danger was so very great.” By 3 p.m. on January 26, 1788, all 11 ships of the First Fleet had safely arrived in Port Jackson. Meanwhile, while waiting for the others to arrive, Phillip and a small party from the Supply had rowed ashore and planted a Union Jack, marking the beginning of European settlement in Australia.

After such an epic journey, the whole ordeal was washed away with swigs of rum. Unknowingly, it marked the start of our rocky relationship with one of the most volatile climates on Earth.

This is an edited extract from Sunburnt Country: The History and Future of Climate Change by Joelle Gergis, published by Melbourne University Publishing. An edited version of this article has also appeared on Pursuit.