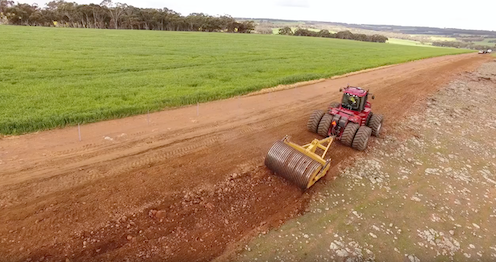 My (DM’s) perception of threatened species habitats changed the first time I encountered a population of endangered lizards living under small surface rocks in a heavily cleared grazing paddock. That was 20 years ago, at a time when land managers were well aware of the biodiversity values of conservation reserves and remnant patches of native vegetation. But back then we knew very little about the biodiversity values of the agricultural parts of the landscape.

Much has changed. Research has clearly shown the important ecological roles of different elements of the landscape for maintaining biodiversity on farms, especially for vertebrates such as carnivorous marsupials, frogs, snakes and lizards. Rocky outcrops and areas of surface rock, often termed bush rock, are among them.

Areas of bush rock are biological hotspots. They represent island refuges for specialised plants and animals, and help ecosystems to thrive even in heavily cleared landscapes. In Australia, more than 200 vertebrate species depend on rocky outcrops to survive, and many of these species are found only in agricultural areas.

Recent surveys by The Australian National University on working farms in New South Wales found new populations of the threatened Pink-tailed Worm-lizard. Rocky outcrops and surface bush rock are the reason these reptiles can keep living in grazing landscapes.

Unfortunately, these critical habitats get little protection in agricultural regions. Rocky habitats may look tough, but they are fragile ecosystems and are easily damaged. Vast areas of surface rock have been removed and previously undisturbed outcrops are at risk of being destroyed by legal and routine farming activities.

The new wave of habitat loss

Licensed operators have been removing bush rock for use in landscape gardening for several decades. This is of growing concern, but is not a new threat to our native wildlife. Instead, more sophisticated technology is being developed which turns vast tracts of rocky country into farmland by crushing and destroying surface rock within minutes.

Across Australia, heavy duty sleds are being towed behind tractors to rip and remove rocky breakaways, ridgelines and small outcrops. The machinery operates like a large cheese grater, ripping bedrock with a row of tines, then crushing the displaced rocks with a large roller. These machines are designed to process large areas at once and can crush an entire hectare of rock every hour.

While not illegal, rock-crushing has massive implications for the populations of native mammals, frogs and reptiles in agricultural areas. This approach to farming is at odds with the principle of land sharing, which encourages agriculture and wildlife conservation on the same land. Pressure to maximise productivity by increasing crop yields and intensifying land use could spell disaster for native species that live in these landscapes.

Some argue that using this new technology reduces soil damage by minimising how often agricultural machinery passes over the land. But this is not enough to offset the loss of this critical habitat. Surely we should be trying to find ways to protect and manage these environments in our cropping landscapes rather than developing ways to destroy them?

A gap in the law

The removal of bush rock is listed as a key threatening process under the Threatened Species Conservation Act 1995. However, this does not include the removal of rock where it is necessary for carrying out a development or activity with an existing approval under the Environmental Planning and Assessment Act. Nor does it prevent the removal of rock from paddocks when it is a necessary part of routine agricultural activity.

This loophole in the legislation could spell disaster for threatened species that rely on bush rock on private property to survive. For example, the Grassland Earless Dragon is thought to have gone extinct in Victoria as a result of habitat loss, including the removal of critical surface rock habitat from across its former range.

It would be a real shame to lose more threatened species to poorly planned and completely avoidable agricultural practices – especially when so many progressive landholders are actively trying to restore and improve biodiversity on the land.