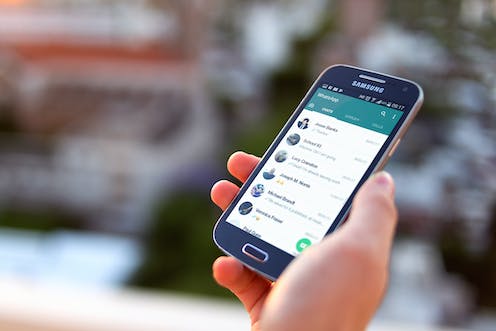 Queensland updated its Ministerial Code of Conduct last month, which reflects the state’s legislation regarding official accountability. The Code now bans Ministers from using private email and messaging apps, such as Facebook Messenger, WhatsApp, Wickr and Snapchat, for ministerial business.

Meanwhile, the question of whether government and law enforcement should have access to encrypted communications between citizens is currently the subject of a national inquiry.

But simply banning politicians from using these apps altogether is a simplistic response to a complex problem – one that is difficult to enforce and easy to subvert.

It raises questions about the privacy of ministers, advisers, officials and their family members, and should be accompanied by a willingness to strengthen official accountability through positive administration of Freedom of Information (FOI) schemes.

Digital messaging is part of life

Digital messaging systems such as email and SMS are so embedded in public and private life that we take them for granted. We use them a lot. Some of these systems allow the dissemination of photos, videos and documents. They are useful. They are often inconveniently durable, and readily copied for sharing with unintended recipients.

On that basis executives, academics, mums, dads, celebrities and teenagers are turning to low-cost “private” messaging systems that encrypt messages, or automatically erase them after reading.

Use of such systems is not prohibited by Australian law. If you value your privacy, are dealing with commercially sensitive information, are engaged in an illegal activity, want to evade FOI obligations, or want some protection when whistleblowing or briefing a journalist “off the record”, these systems are attractive.

And their use is likely to increase in concert with the growing distrust of traditional messaging thanks to official overreach through mandatory metadata retention, and the privacy fears raised by the current Cambridge Analytica imbroglio.

Changes to the Queensland Code may have been triggered by former Queensland energy minister Mark Bailey’s use and deletion of a private email account. Even though he was cleared of any criminal wrongdoing by the Crime and Corruption Commission, the investigation into his email use raised questions about government transparency.

Therefore, one reason for the ban is simply appearances. Ministers need to be seen to be accountable. Accountability erodes when people use non-official mechanisms for communications that should be findable under FOI or litigation.

One of the biggest problems is policing of the ban. Compliance with the Code is a matter of trust. Some people might ignore the Code and use private phones with private messaging capability. They might rely on family members and friends – “I just want to borrow your phone for a moment” – leaving no fingerprints for FOI.

The ban also provokes thought about deeper issues, such as whether politicians have a right to space in which they are not under the public or official gaze. Some people will be chilled by the thought that an invisible observer has the scope to hear or read expressions of affection, or mundane reminders to pick up some milk on the way home. Do we regard that erosion of privacy as “just part of the job”?

Read more: WhatsApp is secure and OK for politicians to use, provided simple steps are followed

Then there is the question of where to draw the line. Should the restriction extend only to MPs, or should it include all ministerial staffers, judges and mid-level officials?

And, of course, there are times when it is imperative that communications be protected. For example, the Premier and senior officials are strongly encouraged to use “secure lines” for discussions about law enforcement regarding terrorism, tax evasion and drug trafficking.

A more positive approach to disclosure

Queensland’s ban isn’t inherently good or bad. It is instead something that should be considered in terms of administration, rights and responsibilities. It should be explored by civil society advocates and other governments, such as NSW and Victoria, that are currently silent on the issue.

Accountability is an issue across Australia, and several governments – such as that in the ACT – are resisting establishment of well-resourced integrity watchdogs.

We can recall the history of corruption or perceived misbehaviour involving ministers, senior officials, magistrates and at least one very senior judge.

We can also recall ministerial and official resistance to accountability via FOI, epitomised by the national Public Service Commissioner’s denunciation of FOI as “very pernicious”. We need to be practical and recognise that both privacy and accountability must be balanced.

Queensland has previously set an example for Australia by making ministerial appointment diaries open for scrutiny. Such scrutiny was strongly resisted by national Attorney-General George Brandis, perhaps because sighting who he was meeting – and making inferences about that meeting’s influence on public policy – would be as disconcerting as knowing who he called.

We currently don’t have timely access to the diaries of all advisers and senior officials. We are unlikely to get that access. We will not get disclosure of who met whom at the various dinners where advocates pay a lot of money for a quiet word with a policymaker. Politicians need to heed public disquiet about opaque funding of political parties.

As things stand, the Code in Queensland is likely to be disregarded.