In our Here’s looking at series our experts explain prominent works of art.

It was December 1868 when Claude Monet walked out into the countryside with his painting equipment, eager to paint the snow-covered fields near his new home in Étretat, on the coast of Normandy. Far away from his disapproving father, he had moved into a house where he and his girlfriend Camille Doncieux and their newborn son Jean could be together. It was here he would produce his painting, The Magpie.

After a period of separation from Camille and with no income, Monet had contemplated suicide. But a commission for three portraits from Louis Joachim Gaudibert and the provision of the cottage by his new patron enabled him to reunite his family and continue to work.

Monet was enthralled by the challenge of recording the transformed winter landscape. Setting up his pre-primed white canvas in front of his chosen motif, he would have taken out his colours in their new metal tubes and for a moment, he must have been transfixed by the whiteness before him — both the fresh snow unifying the countryside and the rectangle of canvas perched on his easel.

Attuned to the nuance of colour flooding his retina and with a head full of the ideas being bandied around in the cafes of Paris about the truth of your first sensation in front of nature, it is intriguing to imagine that moment before the artist squeezed colours onto his palette. 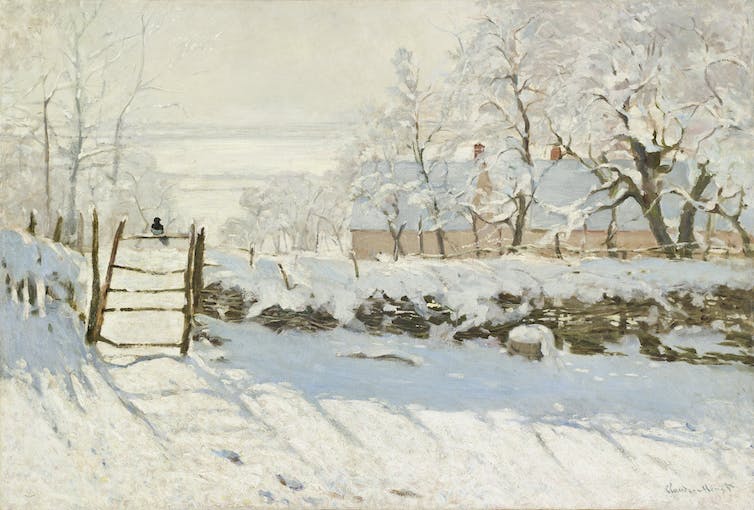 We’re told Monet worked fast and worked across the entire canvas rather than settling on a small section. He wanted to capture the truth of his experiences in front of his motif as the sun rose higher in the sky and the light and colour changed before his eyes. It was a matter of urgency to record as quickly as he could those quixotic changes. In the crisp morning, as the sunlight broke through the trees, it’s likely he stood for some time sensing the atmosphere.

As John Berger reminds us, “Monet once revealed that he wanted to paint not things in themselves but the air that touched things – the enveloping air”. It was that enveloping ambience he was absorbing as he selected his brushes.

Monet and his friends weren’t the first to paint en plein air. Indeed, he had been introduced to this practice by his mentor Eugène Boudin. Gustave Courbet was also well-known for his studies in the open air and earlier Jean-Baptiste-Camille Corot had worked extensively outdoors. For the group soon to exhibit together as “impressionists” in 1874, it was both a philosophical and practical necessity.

Informed by the philosophy of Auguste Comte and the new discoveries of the chemist Michel Eugène Chevreul, these painters began to describe their contemporary world in scientific terms based on their first impressions in front of nature, recorded swiftly in painting. The vibrant blue shadows in the snow in The Magpie, and the complementary yellow sunlight, are Monet’s response to the new colour theories published by Chevreul and Johann Wolfgang von Goethe.

Later, Monet would describe the manner of brushing in the composition:

… here is a little square of blue, here is an oblong of pink, here is a streak of yellow; now paint, just as it looks to you, the exact colour and shape until it gives you your own naïve impression of the scene before you.

Likely, because The Magpie is dated 1868-69, he would have returned several days in a row over the Christmas-New Year period, to capture the same conditions at the same time of day, not only the light but the silence and the cold and that envelope of air. 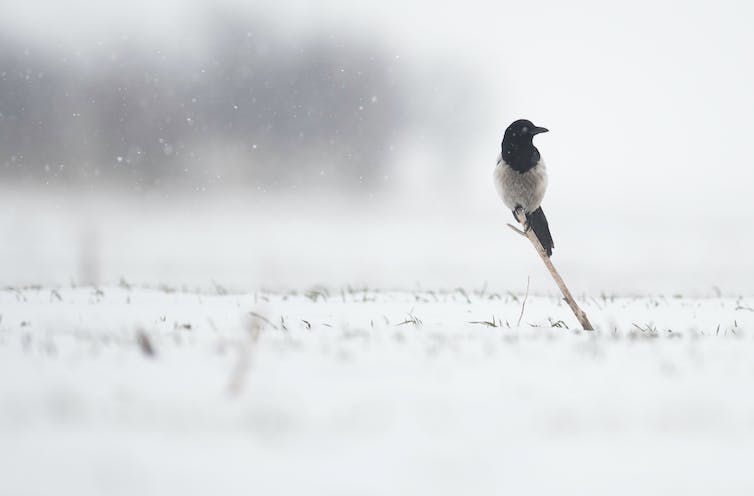 Where did the magpie come from in Monet’s painting? Shutterstock.com

When did Monet decide to introduce the bird that gives the picture its name? Did it fly into the scene and settle on the gate, prompting the artist to block it in with a few deft brushstrokes before adding its blue shadow on the snow?

Or back at home, showing it to Camille, did they think it needed a point of reference, something to guide your eye through the composition? Whether fortuitously or by design the bird brings life to the frozen scene, infusing it with a sense of possibility that it might take flight and leave us once again in blissful solitude.

Looking at paintings puts you in the shoes of the artist. We stand where they did, occupying that charged space between their vision and their interaction with the canvas. The thrill of being in that position, imagining how they transformed what they saw and thought into an artwork, conjecturing about when and how the magpie appeared in this painting, is an important component of our viewing experience.

Unfortunately, this very white painting with its brash blue shadows and perky magpie did not convince the jury, who rejected it for the 1869 Salon in Paris. Eighty years later it was acquired for the collection of the Musée d'Orsay in Paris, where it is now one of its most popular works.

This painting is on display as part of Colours of Impresionism: Masterpieces of the Musee d'Orsay at the Art Gallery of South Australia until July 29 2018.