Energy giant AGL this week unveiled plans to produce hydrogen power at its Loy Yang A coal station. But how do we transform coal, which is often thought of as simply made of carbon, into hydrogen – a completely different element?

In fact, coal is not just made of carbon. It also contains other elements, one of which is hydrogen. But to get a lot of hydrogen, the coal needs to be “gasified” rather than burned, creating compounds that can then be reacted with water to make hydrogen. This is where the majority of hydrogen comes from in this case – not from the coal itself.

Read more: Why is hydrogen fuel making a comeback?

What is coal made of?

You can think of coal’s formation process as a progression from biomass (newly dead plant matter) to charcoal (almost pure carbon). Over time, the oxygen and some hydrogen are gradually removed, leaving more and more carbon behind.

Brown coal thus contains slightly more hydrogen than black coal, although the biggest difference between the two is in their carbon and oxygen contents.

We can understand gasification by first understanding combustion. Combustion, or burning, is the complete oxidation of a fuel such as coal, a process that produces heat and carbon dioxide. Carbon dioxide itself cannot be further oxidised, and thus is the non-combustible end product of the burning process.

In gasification, however, the coal is not completely oxidised. Instead, the coal is reacted with a compound called a gasification agent. Gasification is endothermic, which means it doesn’t produce heat. Quite the opposite, in fact – it needs heat input to progress. Because the resulting gas is not fully oxidised, that means it can itself be burned as a fuel.

So how do we make hydrogen?

Now we know the key concepts, let’s start again at the start. To produce hydrogen from coal, the process begins with partial oxidation, which means some air is added to the coal, which generates carbon dioxide gas through traditional combustion. Not enough is added, though, to completely burn the coal – only enough to make some heat for the gasification reaction. The partial oxidation also makes its own gasification agent, carbon dioxide.

Carbon dioxide reacts with the rest of the carbon in the coal to form carbon monoxide (this is the endothermic gasification reaction, which needs heat input). No hydrogen yet.

Carbon monoxide in the gas stream is now further reacted with steam, generating hydrogen and carbon dioxide. Now we are making some hydrogen. The hydrogen can then be run through an on-site fuel cell to generate high-efficiency electricity, although the plan at Loy Yang A is to pressurise the hydrogen and ship it off to Japan for their Olympic showcase. 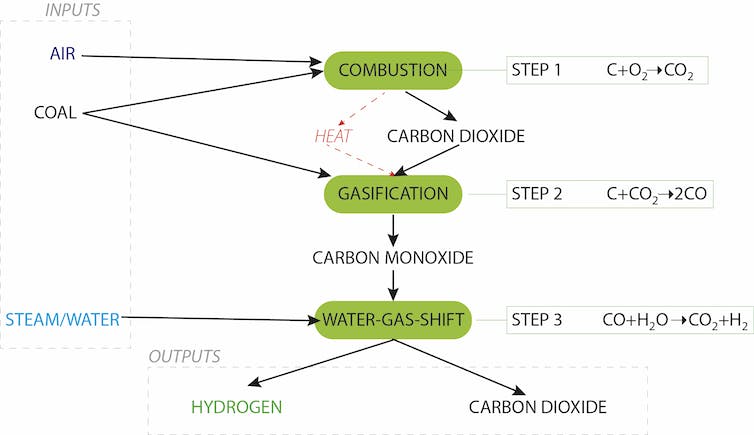 Brown coals are generally preferred for gasification over black coals for several reasons, which makes the brown coal of Victoria’s Latrobe Valley a good prospect for this process.

The main reason is that, because of the high oxygen content of this type of coal, it is less chemically stable and therefore easier to break apart during the gasification reaction. Plus there is a small boost from the hydrogen that is already present in the coal.

Hydrogen produced in this way is not a zero-emission fuel. Carbon dioxide is emitted through the combustion and thermal decomposition reactions, and is also a product of the reaction between carbon monoxide and water to make hydrogen and carbon dioxide.

So why bother making hydrogen?

When hydrogen is used as a fuel, it releases only water as a byproduct. This makes it a zero-emission clean fuel, at least at the point of use.

Producing hydrogen from coal in a large, central facility means pollution control can be put in place. Particulates, and potentially carbon dioxide, can be removed from the gas stream very efficiently.

This is not possible on a small scale, such as hanging off the back of your car. Road transport currently emits dangerous levels of pollutants in our cities every day.

Read more: How protons can power our future energy needs

Gasification processes that use hydrogen fuel cells on site can substantially increase their efficiency compared with traditional coal-fired power. However, depending on the end-use of the hydrogen, and subsequent transport processes, you might be better off in terms of energy output, or efficiency (and therefore carbon emissions), just straight-up burning the coal to make electricity.

But by using gasification of coal to make hydrogen, we can start building much-needed infrastructure and developing consumer markets (that is, hydrogen fuel cell vehicles) for a truly clean future fuel.

I predict that hydrogen power will be zero-emission one day. It can be made in a variety of ways through pure water splitting (including electrolysis, or through solar thermochemical and photoelectrochemical technologies, to name a few). It’s not there yet in terms of price or practicality, but it is certainly on its way. Boosting development of the hydrogen economy through production from coal in the meantime is, in my book, not a terrible idea overall.