An out-of-season bushfire raged through Sydney’s southwest at the weekend, burning more than 2,400 hectares and threatening homes.

As the fire season extends and heatwaves become more frequent, it’s vital to preserve our natural protections. My research, recently released in the journal Austral Ecology, contradict one of the central assumptions in Australian fire management - that forest accumulate fuel over time and become increasingly flammable.

Read more: Ocean heat waves and weaker winds will keep Australia warm for a while yet

I looked at every fire in every forest in the Australian Alps National Parks and found that mature forests are dramatically less likely to burn. Perhaps surprisingly, once a forest is several decades old it becomes one of our best defences against large bushfires.

Within decades of the first graziers taking land in the Australian Alps, observers noticed that English-style management had unintended consequences for an Australian landscape.

In the British Isles, grazing rangelands had been created in the moors by regular burning over thousands of years, and this approach was imported wholesale to Australia’s mountains.

By 1893, however, the botanist Richard Helms had observed that as little as a year after fires were introduced to clear the land, “the scrub and underwood spring up more densely than ever”.

It’s true that, as in the rest of the country, many shrubs in the Alps are germinated by fire. However, the Alps also lie in a climatic zone where many trees are easily killed by fire. As a result, fire produces dense regrowth, and in the worst cases, removes the forest canopy that is essential to maintaining a still, moist micro-climate. Fires burning in this regrowth have abundant dry fuel, and they are exposed to the full strength of the wind.

Read more: New modelling on bushfires shows how they really burn through an area

Theoretically, that should make regrowth more flammable than old growth, but it is at odds with the widespread assumption that fuels accumulate over time to make old forests the most flammable. Which is the case then? Are old forests more or less flammable than regrowth?

Looking back over 58 years of mapped fires in the 12 national parks and reserves that make up the Australian Alps National Parks, I asked a simple question: when a wildfire burnt the mountains, did it favour one age of forest over another? If there were equal amounts of forest burnt say, five years, 10 years or 50 years ago, did fires on average burn more in one of those ages than another?

It’s not an entirely new question; people have often studied what happened when a fire crossed into recently burnt areas.

Consistent with all of the other studies, I found that forests became more flammable in the years after they were burnt; but this is where the similarity ended. Rather than stop there as the other studies have done, I pushed past this line and found something striking. Regardless of which forest I examined, it became dramatically less likely to burn when it matured after 14 to 28 years. 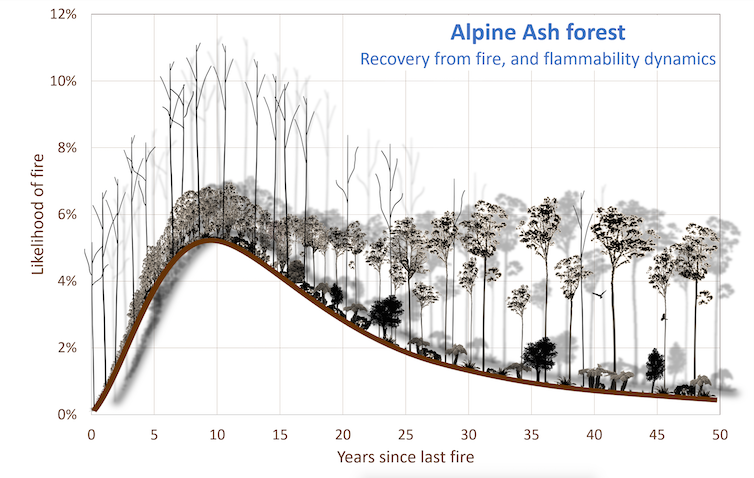 The most marked response of these was in the tall, wet Ash forests. These have been unlikely to burn for about three years after a fire, but then the regrowth comes in. Until these trees are about 21 years old, Ash forests are one of the most flammable parts of the mountains, but after this, their flammability drops markedly. When our old Ash forest is burnt, it is condemned to two decades in which it is more than eight times as flammable.

The forests across the Alps have survived by constructing communities that keep fires small; but their defences are being broken down in the hotter, drier climate we are creating. Roughly the same area of the Victorian Alps was burnt by wildfire in the 10 years from 2003-2014 as had been burnt in the previous 50 years.

Read more: To fight the catastrophic fires of the future, we need to look beyond prescribed burning

More fire means more flammable forests, which in turn mean more fire; it’s a positive feedback that can accelerate until fire-sensitive ecosystems such as the Ash collapse into permanently more flammable shrublands. Knowing this, however, gives us tools.

Old forests are assets to be protected, and priority can be given to nursing older regrowth into its mature stages. It may be the eleventh hour, but we’re better placed now to stand with the forests and add what we can to their fight to survive climate change.