The term “evidence” has a fascinating linguistic and social history – and it’s a good reminder that even today the truth of scientific evidence depends on it being presented in a convincing way.

As recent climate change scepticism shows, the fortunes of scientific evidence can be swayed by something as fleeting as a tweet.

But what does it even mean to speak of “scientific evidence”?

The art of persuasion

History reveals that scientific forms of evidence have rarely, if ever, been detached from rhetoric. In fact, the very idea of evidence has its origins within the context of classical rhetoric, the art of persuasion.

Our modern term originates from the ancient Greek ἐνάργεια (enargeia), a rhetorical device whereby words were used to enhance the truth of a speech through constructing a vivid and evocative image of the things related.

Far from independent and objective, enargeia depended entirely on the abilities of the orator.

In the hands of an exceptional orator – such as the ancient Greek poet Homer – it could be deployed so effectively that listeners came to believe themselves eyewitnesses to what was being described.

Aware of its utility to the law, the Roman statesman Marcus Tullius Cicero brought enargeia into forensic rhetoric during the 1st century BCE, translating it into Latin as evidentia.

For Roman orators such as Cicero and, in the 1st century AD, Marcus Fabius Quintilian, evidentia was particularly well suited to the courtroom.

Here it could be used to paint the scene of a grisly murder: The blood, the groans, the last breath of the dying victim. Recounting the scene of a murder in vivid language brought it immediately before the mind’s eye, affording it the quality of evidentia (“evidentness”) in the process.

Such detail was of paramount importance. The more detail the orator could furnish, the more likely it was that his account would convince the jury of its truth.

From its inception, then, enargeia/evidentia was a device that was used by one person to convince another about a particular reality that might not otherwise be evident. There was an art to it.

We can be forgiven for forgetting that the idea of scientific evidence originates in the art of rhetoric, for early modern scientists went to considerable lengths to disassociate the idea from its classical past.

Through their efforts, the meaning of evidence was shifted from a rhetorical device to denote something sufficiently self-evident that inferences could be drawn from it.

Adopting the English translation of evidentia from the common law in the 1660s, Robert Boyle (1627-1691), Robert Hooke (1635-1703) and other practitioners of the new science situated “evidence” as the end result of unbiased observation and experimentation.

Unlike classical evidentia, scientific “evidence” was objective because it spoke for itself. As the motto of the newly-minted Royal Society of London - nullius in verba - stressed, its members were to “take no one’s word for it”.

Just like forensic evidentia, the truth of scientific evidence was based on its immediacy.

Hooke’s microscope, to give an example, permitted the viewer to witness first-hand the compound eye of the dronefly in such marvellous detail as to leave him or her without any doubt of its reality – a “see-for-yourself” mindset that was crucial to the success of science. 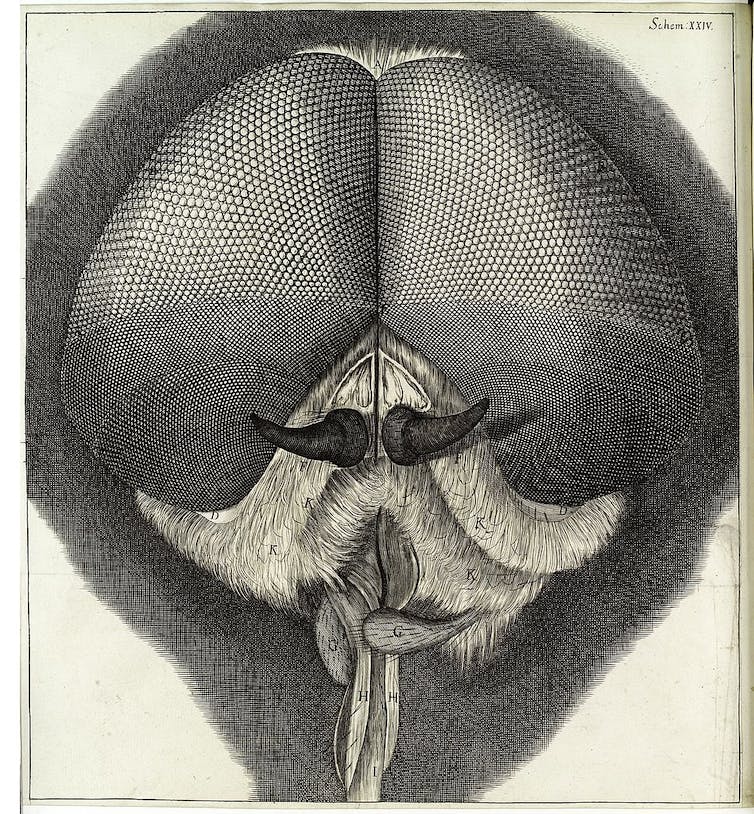 An illustration by Christopher Wren of the compound eye of a drone fly, contained in Robert Hooke’s book Micrographia: or Some Phyſiological Deſcriptions of Minute Bodies Made by Magnifying Glasses. With Observations and Inquiries Thereupon. British Library

Yet in practice, because most people were unable to peer through the eyepiece of a microscope, the evidence Hooke collected remained largely reliant on testimony.

Whether one accepted Hooke’s evidence for a previously unknown, microscopic world depended more on the painstakingly detailed illustrations and descriptions he gave in his 1665 Micrographia than the observations themselves.

Contrary to the Royal Society’s motto, it was not the things themselves but the way in which they were presented – and their presentation by a morally upstanding expert – that ultimately did most of the convincing.

The same holds true today. The invisible structures, processes and interactions that scientists train for years to observe remain unobservable to most people.

The temperature changes, sea level rises and acidification of the ocean that comprise some of the vast and complex evidence for climate change require, in many cases, expensive equipment, years of monitoring and specialists trained to interpret the data before climate change becomes evident.

Even when evident to scientists, this does not make climate change evidence evident to the average person.

US president Donald Trump’s scepticism about climate change is a potent example of just how intertwined scientific evidence and rhetoric remain.

So far the Twitter Trump Archive has recorded 99 mentions of “global warming” and 32 mentions of “climate change” (both appear in some tweets) by @realDonaldTrump.

Situating his tweets as evidence against climate change, Trump poses rhetorical questions to his 50 million followers:

In marked contrast to the complex evidence for climate change, Trump positions his tweets as common sense evidence against it. In this, immediacy is on his side. Freezing weather is readily apparent to everyone, not just to scientists.

Trump’s followers are made direct witnesses to the truth of climate change by appeal to that which is most evident to them and thus, by implication, that which is the best evidence.

Read more: Science isn't broken, but we can do better: here's how

Evidence for climate change, on the other hand, requires trust in the scientific community, a trust that is meant to offset its lack of immediacy and which asks us to suspend our senses.

Trump’s tweets aim to delegitimise this trust, empowering his followers by telling them to trust the evidence of their own senses, their own expertise.

Scientific evidence can’t always be expected to speak for itself.