When the giant moa of New Zealand were hunted to extinction about five centuries ago, the disappearance of the birds themselves was one of several losses.

There were nine species of moa that ranged in size from 15 to 250 kilograms. Moa belong to a group of mostly large, flightless and herbivorous birds called ratites. Like the Australian mihirungs or the Madagascan elephant birds, they would have dominated the pre-human landscape.

But no species occurs in isolation. Perhaps even more concerning than the extinction of the birds themselves was the loss of the interactions that moa had with other plants and animals. For example, if moa consumed and dispersed tree seeds, their loss could have cascading effects that impaired forest regeneration for centuries.

The ghosts of mutualisms past

Previously, researchers had assumed that moa were important dispersers of large seeds in New Zealand’s pre-human ecosystems. This was partly because New Zealand’s native forests contain five tree species with strange, maladapted seeds - miro, matai, pokaka, puriri, and hinau. These seeds seemed poorly adapted for dispersal by living birds, and were therefore considered anachronistic seeds, or “the ghosts of mutualisms past”. 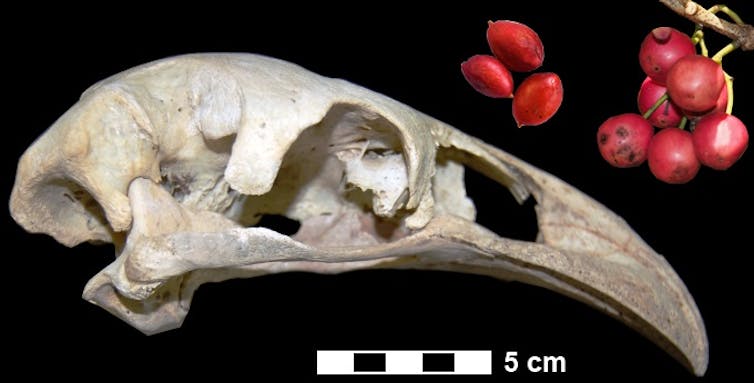 For a long time, scientists thought that moa dispersed large seeds. The skull of the South Island giant moa is pictured with two of the fruits originally hypothesised to have been dispersed by the birds: miro and pūriri. CC BY-SA

These trees all have extremely thick, woody coats protecting their seeds, which take years to germinate. Ecologists wondered whether these seed coats were an adaptation to protect the seeds from the stone-filled gizzards of moa. It even seemed possible that such gut passage may have abraded the seed coats, therefore speeding up the seeds’ germination.

In the late twentieth century, two swamps in the eastern South Island of New Zealand revealed evidence that added support to the hypothesis that moa were important dispersers of large seeds. Beneath the jellied depths of the mires lay several subfossilied moa gizzards, filled with the large seeds of matai and pokaka.

While the discoveries of moa gizzards occurred some time ago, over the last decade a new form of evidence has come to light - subfossil (not yet fully fossilised) moa droppings, or coprolites. More than 150 coprolites have been analysed, revealing new insights into moa diet, behaviour and ecology. 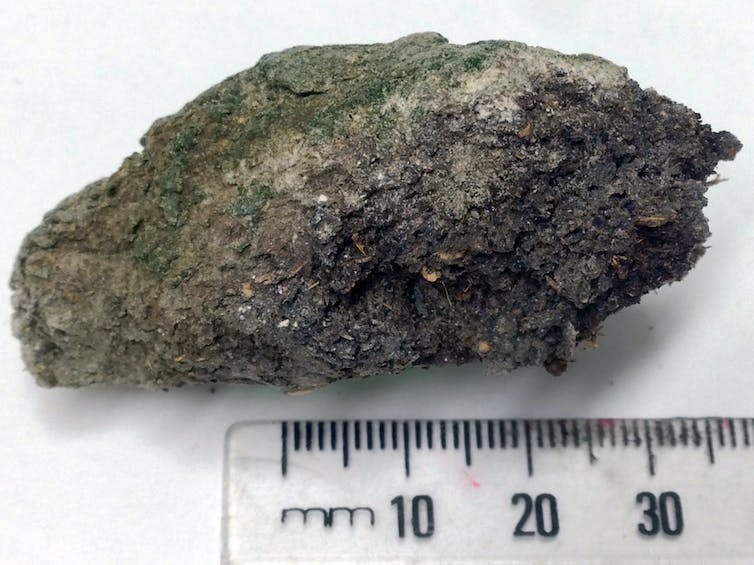 Our study analysed the seed remains recovered from 152 moa coprolites and made an astonishing finding: the powerful, crushing gizzards of the moa actually destroyed all seeds larger than 3.3 mm. Paradoxically, New Zealand’s largest herbivore only dispersed the tiny seeds of low growing herbs and shrubs. In fact, even New Zealand’s smallest seed dispersing bird – the silvereye – disperses far larger seeds than the giant moa ever did.

To confirm our findings, we also simulated the conditions in a moa gut to test whether passage through their intestines would have sped up the germination of hinau and miro. Seeds and stones were tumbled in a concrete mixer for several hours, then bathed in a warm, weak acid bath. These treatments aimed to mimic both a grinding moa gizzard, and the acidity and temperature of their gut.

Contrary to what had long been speculated, these treatments did not speed up the seeds’ germination time. In fact, the seeds still took a protracted two to seven years to germinate.

The danger of assumptions

While our research shows that moa actually destroyed all the large seeds they consumed, they may have still been important dispersers for small-seeded plants. Some large mammalian herbivores in other parts of the world unwittingly disperse a disproportionate number of miniscule seeds as they snatch at foliage and inadvertently consume the tiny seeds that are hiding amongst the leaves. As New Zealand now lacks large native herbivores, the loss of the moa and its interactions with these small-seeded plants may be more of a cause for concern.

Understanding the role that extinct species played in past ecosystems is essential when trying to estimate the consequences of their loss. But the paucity of data for extinct species puts ecologists in a bind: how do you assess the importance of a species that has been gone for hundreds or thousands or years?

Typically, assumptions are made based on supposedly logical inferences. But our study demonstrates that sometimes those assumptions are completely incorrect. When piecing together the jigsaw of the past, it’s important to use several lines of evidence. Fossilised droppings, concrete mixers, acid baths and enormous gizzard stones were all needed to reveal this surprising secret of the lost moa.