Galaxies are a fundamental part of the 13.7 billion-year-old universe. Understanding how a system as complex and striking as our own Milky Way galaxy formed after the Big Bang is one of the great themes of modern astronomy.

Our research, published today in Nature Astronomy, has identified a surprising connection between the age of a galaxy and its three-dimensional shape.

As galaxies get older they get rounder, and fall victim to the middle-aged spread that catches many of us humans here on Earth.

We’ve known for a long time that shape and age are linked in very extreme galaxies – that is, very flat ones and very round ones. But this is the first time we have shown this is true for all kinds of galaxies – all shapes, all ages, all masses.

Unveiling the true face of a galaxy

In this study we calculated both the age and shape of galaxies using different techniques.

Assigning an age to a galaxy is tricky. They don’t have a single birth date for when they suddenly popped into existence.

We assessed the average age of the stars in a galaxy as a measure of the galaxy’s age. Young galaxies have a large fraction of recently formed hot blue stars, whereas old galaxies mostly contain colder red stars formed shortly after the Big Bang.

Spectroscopy — splitting the light from a galaxy into many different colours — allows us to measure the average age of stars in a galaxy. This technique gives a much higher precision than simply using blue or red images as is typically done. 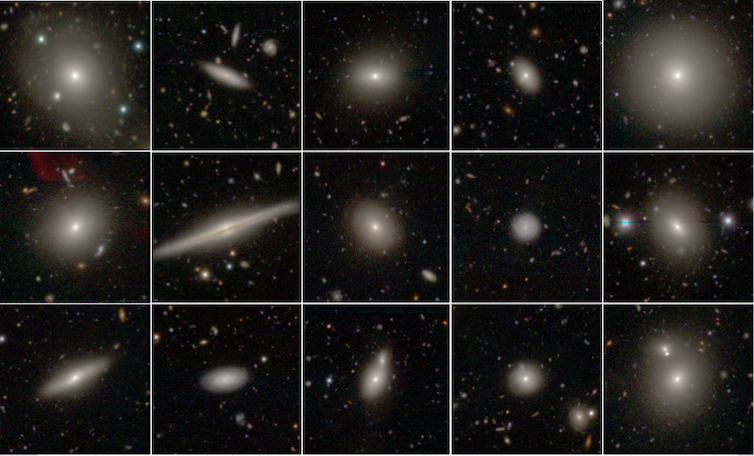 A selection of SAMI galaxies imaged with the Hyper Suprime Cam on the Subaru Telescope in Hawaii. National Astronomical Observatory of Japan (NAOJ), Caroline Foster (The University of Sydney) and Dan Taranu (University of Western Australia)

To measure a galaxy’s true three-dimensional shape and ellipticity, you have to measure how its stars move around.

We see galaxies as two-dimensional images projected onto the sky, but that doesn’t tell us what they really look like in three dimensions. If we can also measure how the stars in a galaxy are moving we can infer their true, three-dimensional shape.

Spectroscopy lets us do this via the Doppler effect. We can measure shifts in the wavelength of light emitted by stars, which depend on whether those stars are moving towards us or away from us, and so measure their motions.

Over the past couple of years, the SAMI Galaxy Survey team has gathered 3D measurements for more than a thousand galaxies of all kinds, and with a hundred-fold range in mass.

Changing the shape of galaxies

So what do we learn about the processes that shape galaxies from this result?

Galaxies tend to form their stars in a pancake-like disk with high ellipticity. But these stars don’t stay in that thin disk as the galaxy ages. 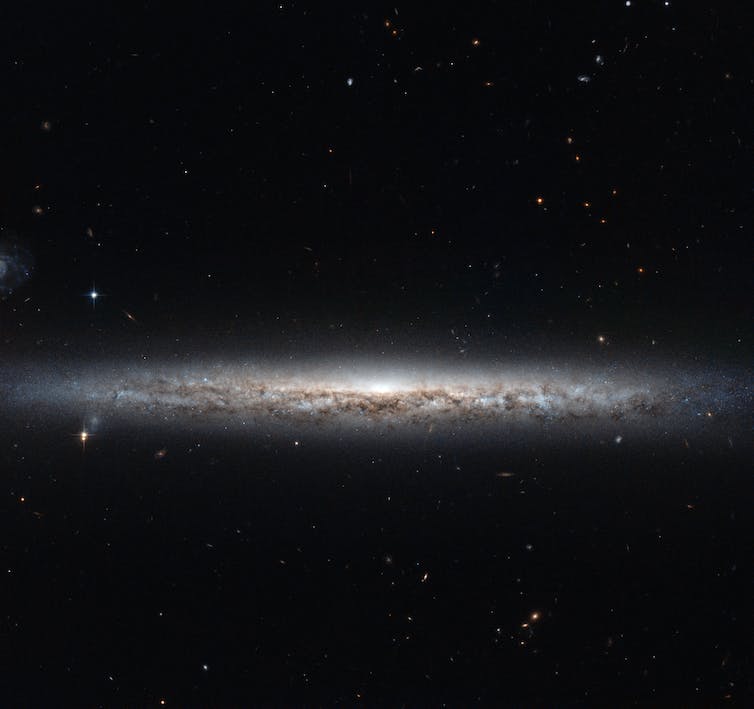 There are lots of different gentle events, known as secular processes, that cause the disk to puff up, becoming rounder and less squashed. A galaxy can be bombarded by other, smaller galaxies. Even if a galaxy is isolated, internal dynamical processes can cause the disk to thicken.

The net result is, as a galaxy ages, its initial thin disk of stars starts to thicken – the middle-aged spread – and the galaxy becomes older, rounder and less squashed. 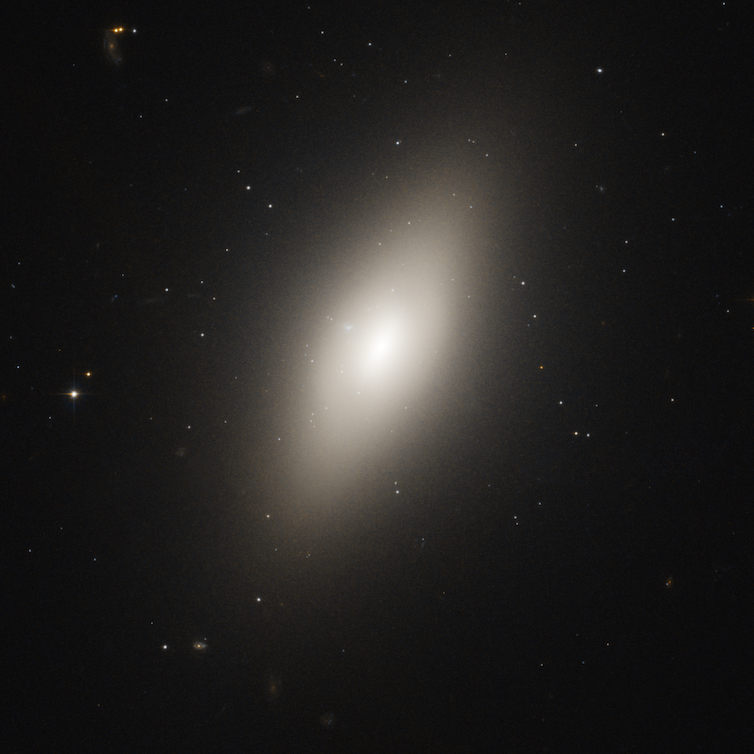 In some cases a galaxy can experience more extreme events that radically change its shape. Elliptical galaxies, such as M87, are the oldest and roundest galaxies in the universe.

Astronomers think these galaxies are formed in major mergers — dramatic collisions between galaxies that result in one massive galaxy being entirely consumed by another.

Because these events are so significant, they scatter all the stars out of the disk of a galaxy, resulting in a much rounder shape. They also prevent any new stars being formed after the merger, causing the galaxy to age rapidly. The end result is an old, very round galaxy.

If we look at our own Milky Way galaxy, which is more than 10 billion years old, we can see examples of this story.

The youngest part of the Milky Way, where stars are still being formed, is the thin disk, which has a very squashed, pancake-like shape. The Milky Way also contains rounder and older components, a thick disk and a bulge, but their origin is still mostly unknown.

Read more: When galaxies collide, size matters if you want to know the fate of our Milky Way

We know that eventually the Milky Way will merge with our galactic neighbour, the Andromeda galaxy. Predictions are that this will result in a very round, very old giant elliptical galaxy.

So, by studying the processes that shape other nearby galaxies, we can learn a lot about the past, and the fate of our own. 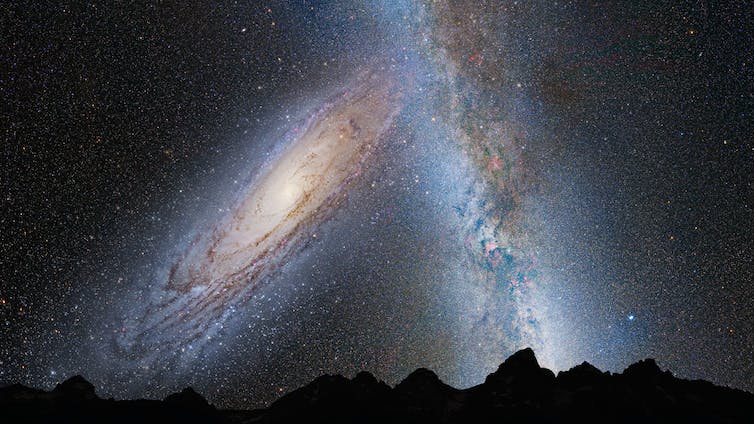 This illustration shows a stage in the predicted merger between our Milky Way galaxy and the neighbouring Andromeda galaxy. NASA; ESA; Z. Levay and R. van der Marel, STScI; T. Hallas; and A. Mellinger