Few, if any, of the nearly 57 million tourists who visit Kyoto this year are aware the city once boasted the most extensive tram network in Japan.

Kyoto is a beautiful city and the cultural heart of the nation. It is celebrating the 150th anniversary of the Meiji Restoration this year. It’s also the 40th anniversary of a less celebrated episode in the city’s history – the closure of the tram system, or “Shiden” as it was known. 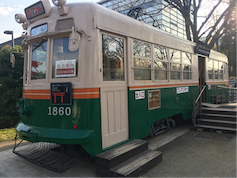 This tram car is being used as an information centre near to Okazaki Park. Author provided

Today, we are seeing a new trend of cities trying to ban cars from their centre. And many cities, including Sydney, that once boasted extensive tram networks are struggling to introduce or extend light rail systems.

With hindsight, Shiden’s closure was one of the biggest mistakes in Kyoto’s history. The city is now struggling to break free of car domination. 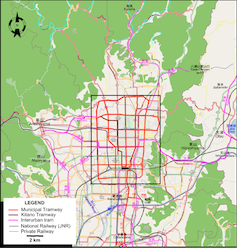 This map (click to enlarge) by Gabod Sandi, which is available online, shows the tramways in 1961, plus interurban lines that still connect Kyoto to Osaka and Shiga prefectures. Gabon Sandi, Author provided

Shiden operations began in 1895 as part of an economic revitalisation strategy. The first step involved building an 8km canal (including lengthy tunnels) connecting Kyoto to Lake Biwa in 1890. This provided water for Japan’s first commercial hydroelectric plant, which powered the new tramway.

Shiden grew over time. By the mid-1960s 70km of lines connected all the major tourist attractions across the city – the Golden Pavilion, Silver Pavilion, Imperial Palace, Nijo Castle and Kyomizu Temple.

This was still a relatively compact system, especially compared to the 291km network that once covered Sydney and the 250km of Melbourne today, the most extensive in the world.

Why did Kyoto abandon Shiden?

Passenger trips on Shiden reached 210 million in 1965. For comparison, tram passenger journeys in Sydney and Melbourne tramways peaked in the 1940s at 405 million and 260 million trips respectively.

In the 1960s, Japan experienced rapid economic growth and urbanisation. By 1970, the population of Kyoto had grown to 1.4 million. This had three major impacts on the tramways.

First, car ownership in the city nearly tripled from 140,000 in 1965 to 380,000 in 1980, according to Kyoto City planning documents. Traffic congestion caused tram delays, resulting in reduced passenger numbers and profitability.

Third, the municipality developed a subway network. The first north-south line opened in 1981.

Shiden was losing passengers and money. In 1978, the mayor decided to close it down. All that remains today are two small privately run tram/light rail lines in the north of Kyoto. 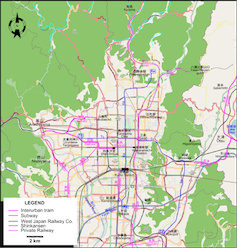 Kyoto’s transport network in 2008 (click to enlarge) with 30km of subway. The Keihan line (connecting with Osaka) and the Keishin line (to Otsu) went from road level to underground tunnels within the city in 1997. Author provided

In the years leading up to the closure there had been intense public opposition to the move. The Shiden Preservation Group, headed by Kyoto University academics, argued that better management of the tram network and an integrated transport strategy was the way forward.

They organised a petition, signed by over 200,000 citizens, to save the trams. Retaining Shiden would help avoid air pollution from increased road traffic, they argued. In addition, Shiden would become a significant tourist attraction, as well as meeting the needs of local people.

Their pleas fell on deaf ears. The tram system was ripped up and bus routes spread across the city. The first section of a new east-west subway opened in 1997 and the line was completed in 2008.

In general, public transport networks in Japanese cities are world class. A handful of cities have managed to retain their tramways. Hiroshima, which has a 35km tram network, is the best example.

To reflect upon the wider consequences of Shiden closure, it may be useful to consider the example of Melbourne. The two cities have some interesting similarities.

Both were former capital cities, built on a grid system. Both were early adopters of trams – 1889 in Melbourne and 1895 in Kyoto. They both host world-class universities and a tourism industry that contributes significantly to the local economy.

And both cities faced a critical decision in the 1970s on whether to retain their tram network.

In Melbourne, pressure to shut down the tram network was resisted, with very strong public and union support (which was lacking in Kyoto). 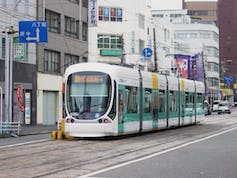 Trams like Hiroshima’s Green Mover Max could have run in Kyoto if Shiden had remained in operation. Taisyo/Wikipedia, CC BY

The Melbourne experience suggests that several key opportunities might have arisen if Kyoto had kept Shiden.

1. Shiden would have gradually been upgraded with new technologies and longer trams with greater passenger capacity. The Green Mover Max in Hiroshima is a good example of the sort of tram that could have been running on Kyoto streets today.

2. Prioritising tramways may have helped to develop more pedestrian spaces in central Kyoto. Bourke Street Mall and Swanston Street in Melbourne are good examples of this. 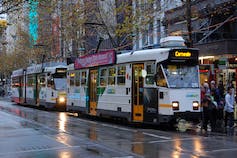 Swanston Street in central Melbourne was closed to traffic in the early 1990s and became car-free in 2010. Bahnfrend/Wikimedia Commons, CC BY-SA

Kyoto, on the other hand, has struggled to manage city centre traffic and has only made minor changes in recent years, including increasing the size of the pavements on some major avenues.

3. Shiden could have dealt better than current systems with increased tourist numbers. Recent media reports indicate that buses are struggling to run on time as more tourists travel around the city. An integrated transport network of bus, tram and subway might have alleviated these problems. 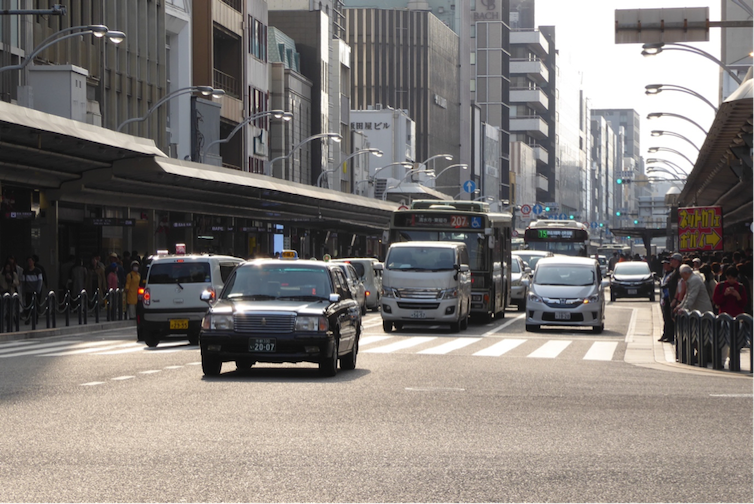 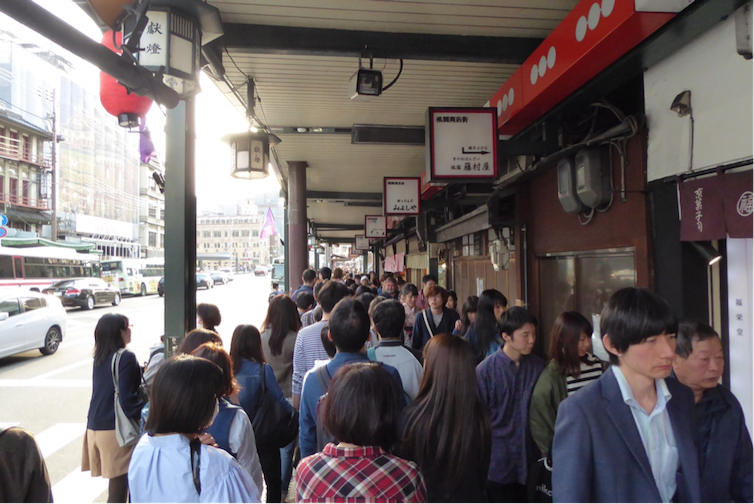 Author provided 4. Kyoto City’s climate plan aims to promote a walkable, low-carbon city. This includes reducing car ownership from 508,000 in 2010 to 475,000 by 2020. Shiden could have supported this strategy and helped to reduce greenhouse gas emissions – something that is very significant for the home of the Kyoto Protocol. Read more: How to build light rail in our cities without emptying the public purse Failed attempt to bring Shiden back All of the above reasons suggest Kyoto would benefit from reintroducing Shiden. In 2006, the Kyoto Municipality began looking at plans for five light rail transit (LRT) routes. The government appointed an expert group to study various options and organised public symposiums. It also conducted experiments where buses travelled along “light rail routes” delineated with traffic cones on existing roads. These activities stopped in 2007 when surveys of the Kyoto public revealed 52% of respondents opposed a new light rail system. The reasons varied, including concerns that it was mainly aimed at tourists and would bring few local benefits while potentially worsening road congestion. Few people in Kyoto today recall the deep affection that the city’s people once had for Shiden, Japan’s first tramway.