We all love delicious foods, even if we know they may not be good for us. Foods high in energy – specifically sweet, salty and fatty foods – tend to taste the best.

This is likely because our ancestors needed to seek out nutritious, high-energy foods when food sources were scarce. The drive to eat foods higher in energy may have allowed early humans to survive through periods of famine or harsh winters.

But today, in Western societies, delicious foods are abundant and people are consuming more energy than ever, leading to an obesity epidemic. Our taste system’s drive to eat more energy-dense foods than we need is part of the problem.

Read more: Fat nation: why so many Australians are obese and how to fix it

So, scientists are investigating whether we can change the way we taste foods to help control how much we eat. 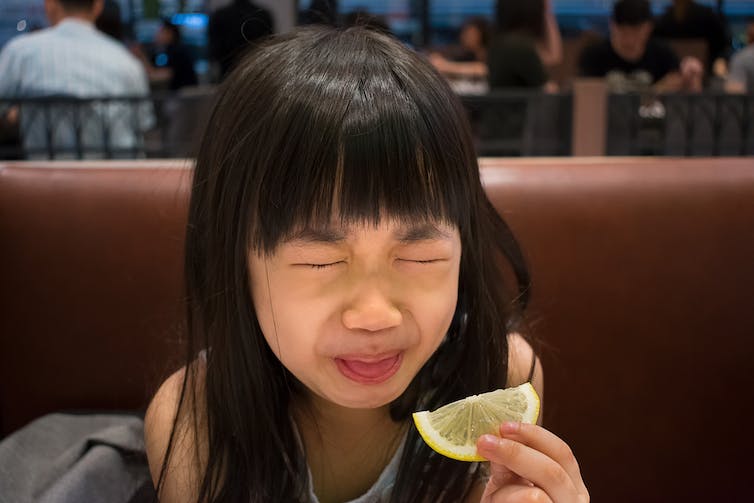 Sour foods indicate the presence of excessive acid. from shutterstock.com

Excessive sour and bitter tastes are unpleasant and lets us know these qualities may be potentially harmful. The other tastes are generally pleasant and indicate the food contains high amounts of energy.

Not everyone is as sensitive to certain tastes as others. For example, one person may think a particular food is too sweet whereas another person may think the sweetness is just right. These differences in sensitivity to a taste are the key to understanding what drives our diet.

Read more: Curious Kids: why do some people find some foods yummy but others find the same foods yucky?

Sensitivity can influence the way we eat foods in two ways. The first is through our preferences, which influence the choices we make to eat certain foods. The second is through satiety, which affects how full we feel after eating.

Studies show that when it comes to preference, being more sensitive to desirable tastes (sugar and salt) leads to a greater acceptance of those tastes, but the opposite is true for unpleasant tastes (sour and bitter). In one study, children who were more sensitive to a bitter compound found in some vegetables, such as broccoli and Brussels sprouts, were less likely to want to eat them. 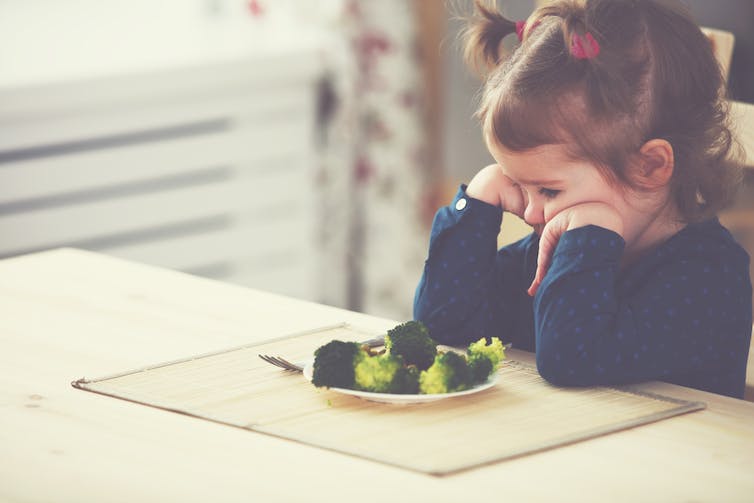 Children sensitive to a bitter compound in vegetables like broccoli were less likely to eat them. from shutterstock.com

In the case of satiety, some tastes don’t have much of an impact on food preference, but rather on how full we feel. A good example of this involves fat taste. One study showed that people who were less sensitive to fat taste had reduced satiety signals when eating fatty foods. This means they have to eat more fatty foods before they reach a feeling of fullness or satisfaction.

This whole system becomes a lot more complex when we start combining multiple tastes. For instance, one study showed that the combination of saltiness and fattiness overrode the satiating effects of salt and fat, regardless of sensitivity, so everyone needed the same amount to feel full.

Read more: Portion size affects how much you eat despite your appetite

What this means for our waistline is that some people may naturally find it harder to stop eating than others, depending on how sensitive they are to certain tastes. But sensitivities are flexible, so we may be able to train ourselves to prefer healthier foods or feel fuller after eating smaller portions.

So, if taste sensitivity drives food intake, can we can change our sensitivities and essentially train ourselves to eat less energy-dense foods?

In a recent trial, we used twins to investigate whether genes or the environment affect how sensitive we are to fat taste. Twins went on either a low-fat or high-fat diet for eight weeks to see how their perception of fat taste changed. 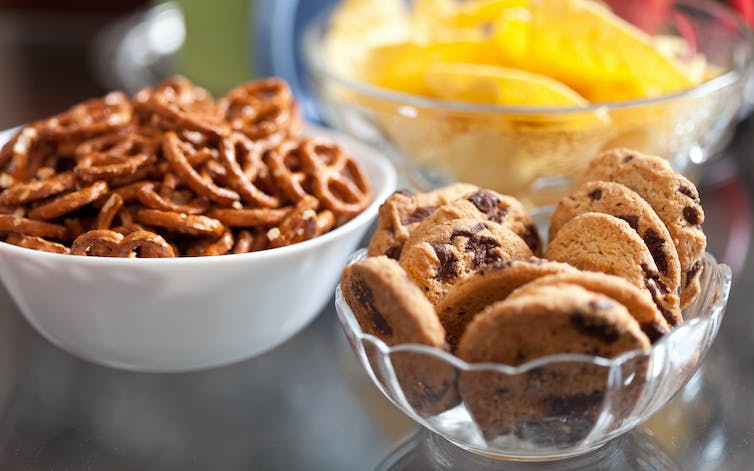 It’s ideal to try to moderate your intake of salty, sweet and fatty foods. from shutterstock.com

We found diet had more of an influence on how sensitive people are to fat taste than their genes. This means that genes have little control over fat taste sensitivity, so it’s not set in stone.

If you stick to a low-fat diet for at least eight weeks, your body will adapt to those conditions and you will become more sensitive to fat taste. Fatty foods will start making you feel fuller more quickly and you won’t feel the need to eat as much to be satisfied.

When it comes to sweet and salty tastes, studies have shown genes partially control these. So, sensitivity to these tastes could be modifiable based on your diet – although additional studies are necessary to confirm this.

Read more: Yes, too much sugar is bad for our health – here's what the science says

Ideally, it’s best to try to moderate your intake of salty, sweet and fatty foods. This may be difficult at first as your body may be accustomed to these tastes, but after some time your sensitivities will increase. In essence, it gets easier over time. The more sensitive you are to these tastes, the more preferable, or satiating, they will become.