Unhealthy diets and poor nutrition are leading contributors to Australia’s burden of disease and burgeoning health-care costs. In 1980, just 10% of Australian adults were obese, today that figure is 28% – among the highest in the world.

And yet, as shown on Monday night’s Four Corners’ episode – which was a stunning expose of food, nutrition and health politics in Australia – successive governments have done little to address it.

What the program highlighted was as important as what it did not. It showed a clear need for a sugar-sweetened beverage tax and a national strategy with a comprehensive package of measures to reduce obesity.

What we also urgently need (and which wasn’t noted in the program) is a national nutrition policy, based on the Australian Dietary Guidelines, to promote healthy diets and good nutrition more broadly. It is long overdue – we haven’t had one since 1992.

Arguably the most important reason for why none of this currently exists is the gorilla in the policy-making room: the political might of Big Food to undermine support for policy reform. Why does Big Food hold such a powerful grip on Australian food and nutrition policy?

Read more: How 'hidden' sugars are pushing up your daily dose

The political power of Big Food

The Four Corners program is consistent with our prior research showing that Big Food’s power to obfuscate, delay and undermine food and nutrition policy reform stems from several sources. These include its economic importance as an industry and employer, access to and influence with political decision makers, and the adoption of self-regulatory codes (for instance on marketing and food labelling) as a means to pre-empt, and substitute for, government regulation.

Read more: Fat nation: the rise and fall of obesity on the political agenda

Many tactics used by these transnational, economic titans sway public policy against what health research shows is the best way forward. Among these are lobbyists disputing the evidence base, companies like Coca-Cola funding research to confuse the science and deflect blame away from dietary intake, and donations by companies to political parties to gain access and influence. 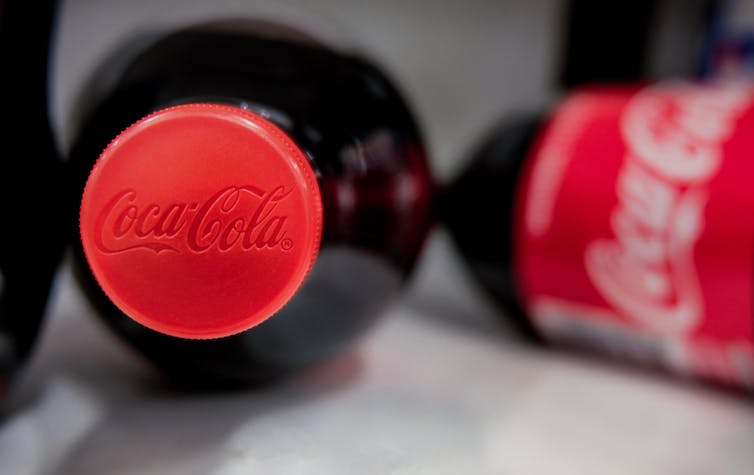 Companies like Coca-Cola have in the past funded research to influence the results. from shutterstock.com

Four Corners showed Big Sugar’s power also comes through its economic and political importance in the swing “sugar states” of Northern Australia. It came as no surprise to hear from George Christensen – member for one of these states, Dawson – that a sugar tax will impact on the sugar industry (in his electorate) but do “absolutely nothing to impact on obesity”.

Evidence for a sugar tax

Geoff Parker, CEO of the Australian Beverages Council, told Four Corners that policymakers have not implemented a sugary drinks tax because they “look to the evidence base”. That such a tax is overly-simplistic - it would be a “silver bullet and white knight” solution to a complex problem. This tactic of disputing the evidence and obfuscating it with claims of complexity is a lobbying classic.

Let’s be clear – comprehensive systematic reviews clearly demonstrate a link between free dietary sugars, sugary drink consumption and obesity. So much so that in 2015, the World Health Organisation made a “strong recommendation” to limit free sugars to less than 10% of total energy intake (12 teaspoons per day for the average sized adult).

By far the main source of free sugars in the Australian diet – an estimated 81% – comes from energy-dense, nutrient poor “discretionary” (i.e. _junk _foods). Over half of free sugars is estimated to come from sugary drinks.

With regards to sugary drinks taxes, the evidence is strong and continues to grow. Such taxes work to drive down consumption, incentivise manufacturers to put less sugar in their products, and generate revenue for investment in public health programs.

An evaluation of Mexico’s sugary drinks tax, for example, demonstrates a clear reduction in sugary drink purchases since the tax was introduced in 2013.

Read more: What the world can learn from Mexico's tax on sugar-sweetened drinks

Of course a sugary drinks tax is no silver bullet. It is just one intervention among several that would act synergistically to drive health-promoting changes throughout the food supply and consumer food environment.

A sugar tax is a good start for tackling the obesity problem. Australia is lagging behind the 28 jurisdictions with such a tax already in place. But it is only one among many actions needed to prevent obesity. Obesity is in-turn only one among several nutrition problems that will need to be tackled if Australia’s overall disease burden is to be reduced.

Going forward, the most effective and efficient activity to promote good nutrition and prevent diet-related diseases, is a coherent national nutrition policy based on the Australian Dietary Guidelines.

Read more: Health Check: how much sugar is it OK to eat?

Such a policy will involve governments, nutrition scientists, industry and civil society working together across the food system - from food production through to retail - to promote consumption of five food group foods and the avoidance of discretionary foods.

Big Food should be consulted in relation to policy implementation. But it should not have a seat at the policy-making table nor a role in setting Australia’s food and nutrition policy agenda.

It's one thing to build war fighting capability, it's another to build industrial capability

Explainer: will life mean life when the Christchurch mosque killer is sentenced?