It wasn’t a big budget for education this year, with schools funding already set in the last Budget, and the funding freeze for universities announced in the Federal Government’s mid-year budget update in December.

But the National Schools Chaplaincy program will become permanent, with A$247 million set aside over four years from 2018-19.

And there is some good news for students in regional, rural and remote areas, with: 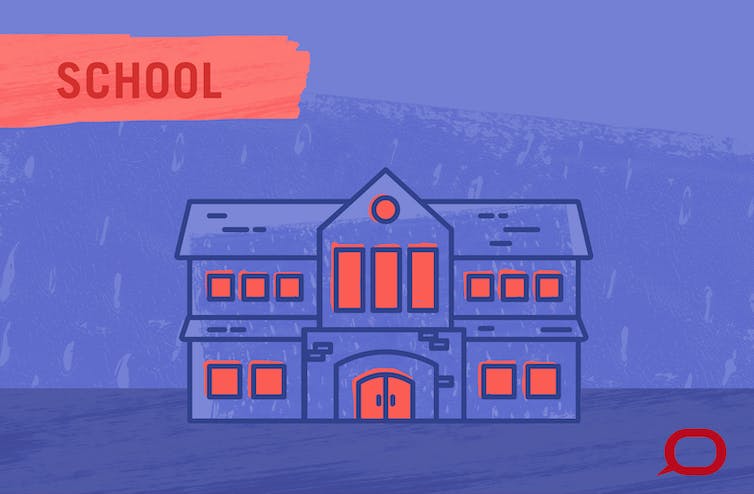 Mai Lam/The Conversation, CC BY-ND Schools and early education funding Glenn Savage, Senior Lecturer in Education Policy and Sociology of Education at University of Western Australia Despite ongoing political debates about school funding, most of the big news happened in last year’s budget, when the federal government formalised details associated with its Quality Schools reform package. The package centres on a commitment to align school funding with the Schooling Resource Standard (SRS) recommended in the 2011 Gonski report into school funding. To achieve this, the government plans to progressively raise funding levels for government schools from 17% to 20% of the SRS and for private schools from 76.8% to 80% of the SRS by 2027. The government argues that this delivers an additional $24.5 billion for Australian schools over the decade, and says it will be up to states as to whether they wish to fund the remaining amounts so that all schools reach the full SRS. The government also claims its reform package provides more consistent needs-based funding when compared to the so-called “special deals” established under the Labor Gillard government. Labor doesn’t agree, suggesting the Coalition is shortchanging the nation to the tune of A$17 billion (the initial claim was $22 billion) when compared to promises made by the former Gillard Labor government. Labor has promised, if re-elected, to return to the Gillard model. This ensures funding will be a defining issue at the next federal election, especially given last week’s Gonski 2.0 report has made a suite of recommendations that the federal government supports and could very well require an additional injection of federal funds to implement. But any potential changes hinge on whether the Coalition is actually in power when next year’s budget is delivered. And, if so, whether it has any luck pursuing the new Gonski agenda with states and territories. Aside from these ongoing Gonski wars, this year’s budget contains a few additional highlights. Most controversial is A$247 million over four years to extend the National School Chaplaincy Program, which will have a new anti-bullying focus. The program was first introduced under the former Howard Coalition, but was subsequently dumped by Labor. It’s strongly supported by conservative backbenchers. Other notables in this year’s budget include: • A$440 million to extend the National Partnership Agreement on universal access to early childhood education for a further year. • A$154 million to promote active and healthy living. This includes A$83 million to improve existing community sport facilities and expand the Sporting Schools and Local Sporting Champions programs. • A$11.8 million over three years to expand the Early Learning Languages Australia program to more preschools and trial the program in 2019 and 2020 from the first year of school through to year two in primary schools. • A$6 million over two years (from 2017-18) to continue and update the communications campaign to increase public awareness of changes to the Quality Schools package (aka public relations to sell the government’s reform package). • A$1.3 million per year until 2020-21 to continued funding the MoneySmart Teaching program, designed to improve financial literacy education in schools. • A$134.3 million over four years to the Northern Territory as part of the children and schooling component of the National Partnership Agreement on Northern Territory Remote Aboriginal Investment. Finally, the government has signalled its intention to continue exploring ways to deliver new and diverse pathways into the teaching profession, with the view to increasing the supply of quality teachers. This measure builds on previous work associated with the Teach for Australia program. To pursue this aim, the government has suggested it will invite proposals in 2018 from providers to deliver alternative pathways into teaching. Higher education and VET funding Andrew Norton, Program Director of Higher Education at Grattan Institute 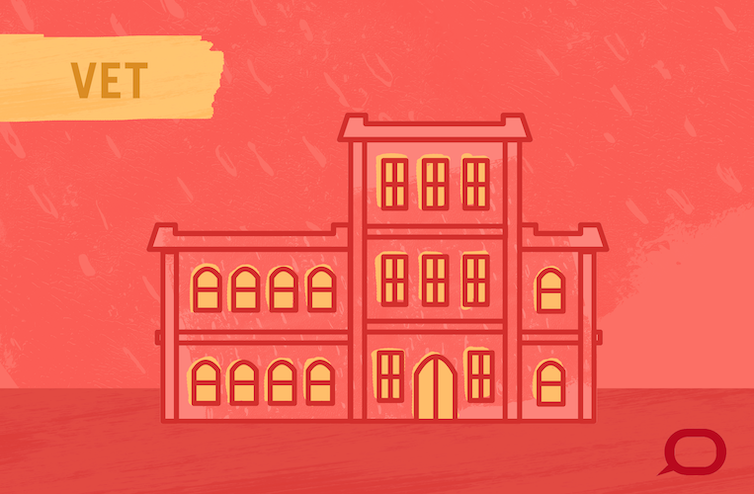 Mai Lam/The Conversation, CC BY-ND VET The long aftermath of the VET FEE-HELP loan fiasco is still being felt in the 2018-19 Budget. The government is planning to spend A$36.2M over fours years for a new IT system to ensure compliance in the replacement VET Student Loans program. The VET Student Loans Ombudsman, given the task of receiving student complaints about vocational education lending, is to receive another A$1 million to help deal with the large numbers of people making complaints. 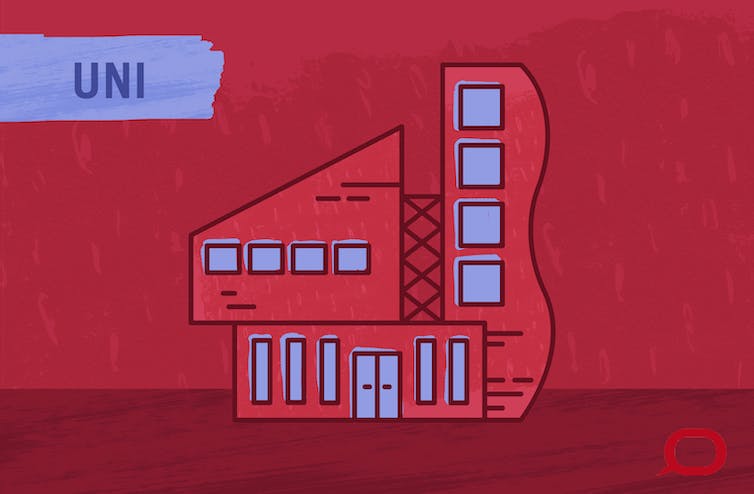 Mai Lam/The Conversation, CC BY-ND Higher education Higher education’s big Budget news came early, in the December 2017 Mid-Year Economic and Fiscal Outlook (MYEFO). It announced a two-year pause in tuition subsidy growth, and a range of reforms to the Higher Education Loan Program (HELP). There is no major change to these decisions in the 2018-19 Budget. The pause in tuition subsidy growth has been implemented. It was done without going back to parliament using university funding agreements. For domestic bachelor degree places, universities will receive the same total amount that they received for 2017 for each of 2018 and 2019. Previously, there were “demand driven”, meaning that the Government would fund every student the universities enrolled. This funding freeze means that universities won’t receive the value of inflation indexation to per student Commonwealth contributions, or Commonwealth contributions for any additional students they enrol above 2017 levels. But they will still receive indexed student contributions for all students they enrol. The government has also used the funding agreements to reduce the number of Commonwealth-funded diploma, associate degree, and postgraduate coursework places. About 4,000 allocated places were abolished, but some of these weren’t being used anyway, so the practical effect may be limited. Soon after these policies were announced, partial exceptions began with the University of Tasmania, the University of the Sunshine Coast and Southern Cross University all receiving additional places. These are confirmed in the Budget at a cost of A$124 million over five years. In addition, the Budget has a new announcement of A$96 million over four years for nearly 700 extra student places for young people from regional areas. This is in response to the Independent Review into Regional, Rural and Remote Education. Including the new places, funding on Commonwealth contributions through the Commonwealth Grant Scheme will be just over A$7 billion for 2018-2019. From 2020, the government says it will resume funding increases based on population growth for universities that meet yet-to-be determined performance criteria. The Budget paper shows predicted spending of A$7.3 billion in 2020-21. But numbers this far out are moot. With an election due in the next 12 months, and Labor indicating it will go back to demand driven funding, the funding freeze could be over by then. If the Coalition survives in office, it may also make substantial changes. The other major MYEFO announcement was to the Higher Education Loan Program (HELP) loan scheme. Unlike changes to total tuition subsidy payments, these need legislating and the relevant bill is still before the Senate. The most important proposed changes to HELP are the income thresholds determining whether, or how much, a HELP debtor needs to repay each year. If it passes, the bill would lower the initial repayment threshold from A$52,000 a year to A$45,000 a year. HELP debtors earning between A$45,000 and A$52,000 would repay 1% of their income. But some other thresholds are more generous than now, and many HELP debtors would end up paying less per year than they do now. The government also originally proposed a A$100,000 lifetime cap on borrowing under HELP for all courses except medicine, dentistry and veterinary science, rather than just the full-fee student FEE-HELP scheme. The Budget confirms that the cap would be A$100,000 of HELP debt at any one time, allowing people who have paid off some debt to borrow again. Whether HELP reforms eventually pass the Senate remains to be seen. In either case, it is fortunate for the higher education sector that they were not rejected prior to the May 2018 Budget. The freezing of the demand driven system showed the government was not bluffing when it said it needed to reduce higher education spending. Like the demand driven system, equity programs and some research programs are vulnerable to cuts the parliament cannot easily stop. As it turns out, these programs survive in the Budget. Research funding will receive a modest boost, with nearly A$400 million extra over five years for research infrastructure. Although the higher education sector gets off lightly in the Budget compared to MYEFO, higher education providers will be hit with extra charges. The Government plans to charge them more for the services of the Tertiary Education Quality and Standards Agency. The government also plans to charge higher education providers A$10 million a year to recover costs associated with HELP. We can only hope some of this is used to improve on the current very unsatisfactory public reporting of HELP’s finances.