We might not know who designed Meghan Markle’s wedding gown until she walks up the aisle at St George’s Chapel on Saturday to marry Prince Harry, but we can be assured that her dress will inspire bridal trends for years to come. And if history is a guide, Markle, like the Duchess of Cambridge, Kate Middleton, will have scrutinised dresses worn by past royals before making her important decision.

Some have suggested Markle may not wear white because she is divorced (she was married to producer and actor Trevor Engelson until 2013). Yet the age-old tradition of wearing white to the altar has not always been wedding etiquette. Until the mid 19th century, white - being the colour of mourning for French royalty - was rarely seen. Black was a favourite for Scandinavian brides. 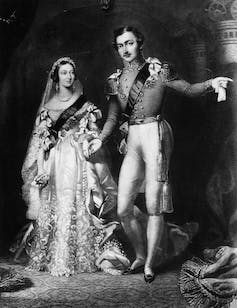 Queen Victoria started a trend when she wore white to her wedding with Prince Albert. Wikimedia

An important precedent was set when white was chosen by Queen Victoria for her marriage to Prince Albert in 1840. The Queen selected this pure colour as a sign of frugality, not wishing to appear ostentatious in front of her British subjects. She did, however, forbid anyone else from wearing white to her wedding and had the pattern for her dress destroyed so it couldn’t be copied.

Queen Victoria’s choice of an orange blossom wreath and tulle veil rather than a more traditional bonnet instigated a fashionable following that continues to this day.

Royal weddings have provided some of our most memorable bridal moments. The Queen Mother married King George VI in 1923 in a simple wedding dress very much in keeping with an era in which Chanel made unstructured styles de rigueur. Many weddings of the 1930s were second marriages due to the carnage of the first world war and this resulted in a major shift in traditional wedding attire. 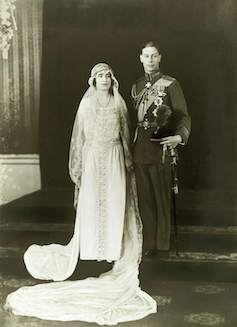 The wedding of the Queen Mother, Elizabeth, and King George in 1923. Wikimedia

Most notable was the famed wedding of the Duke of Windsor to twice-divorced, American Wallis Simpson. In keeping with the austere times, Wallis wore a simple pale blue dress designed by Mainbocher who was responsible for much of her everyday wardrobe. It became one of the most copied dresses of the times.

Due to austerity measures following the war, fabric for wedding dresses was scarce during the 1940s. Ingenious solutions were sought, with parachute fabric or the heavier silk used to contain the supplies dropped from military aircraft reused to created bridal gowns.

Even the then-Princess Elizabeth had to use clothing ration coupons to pay for the heavy duchesse satin of her 1946 wedding dress. The British government allowed her an extra 200 coupons since her gown was viewed as a national investment, being a product of its time. The train was symbolic of rebirth, hope and growth in the period following the world war.

Kate Middleton’s 2011 wedding gown, designed by Sarah Burton, creative director of Alexander McQueen, was a 1950s-style dress made with satin gazar, lace and organza, nipped in at the waist with a full skirt designed to resemble an opening flower.

It was inspired by the iconic dress Grace Kelly wore for her 1956 marriage to Prince Rainer III of Monaco. Created by Helen Rose, a costume designer in the wardrobe department of Metro-Goldwyn-Mayer, this gown was made with taffeta and embellished with 125-year-old lace. It had three petticoats: a smoothing one, a ruffled one and a foundation petticoat. 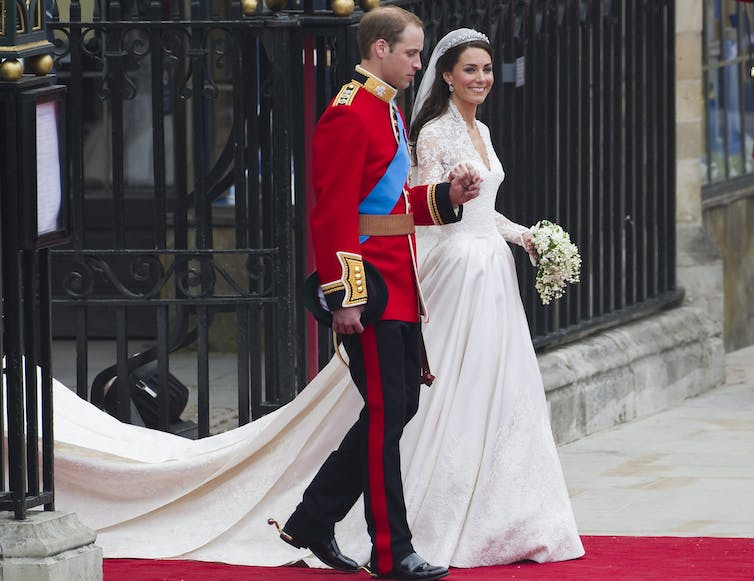 Kate Middleton and Prince William at their wedding in 2011. IAN LANGSDON

Kelly’s became the most admired wedding dress of the decade and, like the Duchess of Cambridge’s traditional dress, had an instant impact on style history, inspiring thousands of copies worldwide.

But let’s not forget Kate’s other wedding dress: a second McQueen strapless evening dress worn later that day. Although she may not have invented the two-dress concept, it has become very popular since.

Royal wedding dresses have both reflected and set the trends of the day. Princess Diana’s voluminous ivory wedding gown worn in 1981 was in true 1980s “Dynasty” style. The Emanuel design was totally excessive with layer upon layer of silk taffeta and encrusted with over 10,000 pearls.

Even with its dramatic 7.62 metre train, the dress was emulated the world over and the puffy-sleeve trend was born. Although it was not to everyone’s taste, we are still talking about it.

The dress of the royal bride speaks to its time. While the bridal gown is a garment unrivalled in its emotional appeal, the royal wedding dress often carries deep messages that are important to the era it was created. Markle’s will no doubt be photographed, scrutinised and copied by future brides who dream of fairytale romances - the stuff of Hollywood and her former world.