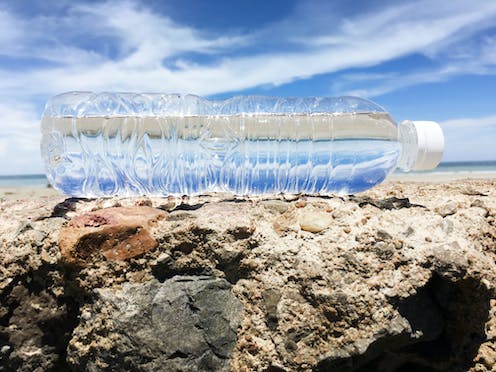 Groundwater being pumped from a highland aquifer, only to be whisked away in tankers and sold in little plastic bottles by a multinational corporation – it’s a difficult concept for a small farming town to swallow.

Just ask the residents of Stanley, Victoria, whose four-year court battle to stop a farmer bottling local groundwater for Japanese beverage giant Asahi ended in failure last month. They were left with a A$90,000 bill for legal costs.

Locals have clashed with the bottled water industry in many parts of the world, including the United States and Canada, and perhaps most famously in the French spa town of Vittel, where residents have accused Nestlé of selling so much of their water to the rest of the world that they barely have enough left for themselves.

These conflicts demonstrate the challenge of balancing the competing demands on water drawn from underground. Compared with surface water, which is less tricky to monitor, groundwater is far harder to govern.

Read more: Hidden depths: why groundwater is our most important water source

Under the Australian Constitution, water is primarily governed by the states. In Victoria, groundwater in high-use areas is managed using groundwater management plans under the Water Act, and water for commercial or irrigation purposes requires a take and use licence. This licence specifies the maximum volume of water a user is allowed to divert each year and under what conditions - what is often called an ‘entitlement’.

If a licence-holder wants to amend their licence, they need to apply to their regional water corporation.

It was one such application that triggered the dispute in Stanley. Local farmer Tim Carey applied to change the source of 19 million litres of his existing licence from surface water to groundwater, and from agricultural to commercial purposes. This would allow him to truck the water to a bottling plant run by Mountain H2O, owned by Asahi.

The changes were approved by Goulburn-Murray Water under the local water management plan. Stanley’s residents were concerned about the impact on irrigation and the environment, and tried to challenge Carey’s operation under local planning laws. But the court said that his approved water licence meant he didn’t need planning approval too. With no clear legal options now left for local residents, that may well prove to be the final say on the matter.

How did this happen?

Unfortunately, before about 1980, water entitlements were given away like kittens by various water agencies. As a result, in some areas, users are entitled to much more water than they actually use - sometimes more than is sustainable. And politics generally precludes any intervention to amend these inflated entitlements once the licence-holders have become used to having them.

Extensive droughts in the late 1970s and early 1980s, combined with the Darling River’s striking algal bloom in the early 1990s, catapulted the importance of effective water management into the public consciousness.

In 1997, this resulted in “the cap” – limits on surface water diversions in the Murray-Darling Basin. However, the cap didn’t limit groundwater extractions, which then increased dramatically. The regulation of groundwater, memorably described in an 1861 court case as too “secret, occult and concealed” to even attempt, has long lagged behind that of surface water.

It wasn’t until the Millennium Drought (2000-09), with the advent of the National Water Initiative and the federal Water Act 2007 that Australian groundwater management underwent significant, large-scale reform. The main thrusts of the reforms were the development of legal and planning frameworks to achieve sustainable management of surface and groundwater, and the restructuring of water markets to be nationally compatible.

The new water governance regime created under the federal Water Act, under which the Commonwealth assumed important powers over waters in the Murray-Darling Basin, allows for groundwater markets and new limits on groundwater withdrawals. Groundwater trading is generally constrained by rules that require the “to” and “from” locations to be hydrologically connected to one another.

Stanley’s groundwater falls within a new mega-planning area that covers great swathes of northern Victoria. The new management plan for this area is due at the end of the year, but is currently only 30% complete.

Even if the plan is finished on time, groundwater sustainability in regions like the Ovens might elude us. Limits on water extraction are generally based on the entitlements in the area. But as current groundwater usage is less than those entitlements, “sleeper” licences can still be activated. During shortages, when the economic value of water peaks, people can trade water that would otherwise remain unused. In some management regions, the total entitlement volume is roughly double or more than the actual usage.

The Stanley case shows how communities can mobilise when groundwater moves from one use to another. If new plans further encourage groundwater markets, we should brace ourselves for more of the same – although it is unclear whether other communities would enjoy any more legal success than the people of Stanley.

What are management decisions based on?

High-profile cases like Stanley’s highlight the need for a robust scientific basis for licensing decisions. Communities facing change will have a difficult time accepting decisions that are not supported by rigorous science.

Unfortunately when it comes to groundwater, it’s far from straightforward to work out how much water is down there and where it goes. An expert hydrogeologist retained by Stanley’s residents argued that the modelling used to estimate the impact of the bottled water extractions was very simplistic. Mapping groundwater with an overly simplistic model is akin to using an identikit sketch of a smiley face to catch a criminal.

Read more: The world's biggest source of freshwater is beneath your feet

But water corporations have finite resources, and if we want in-depth analysis, then we need to invest in management planning tools such as drilling programs and numerical groundwater models supported by monitoring data and surveys of groundwater-dependent ecosystems. This sort of analysis is time-consuming, expensive and currently a political stretch. Governments only tend to spend serious money on groundwater investigations once people start running out of water.

However, if we want to get groundwater licensing right, it needs to be scientifically robust, environmentally sustainable, and procedurally fair.As Stanley’s residents discovered, there might be no second chance.