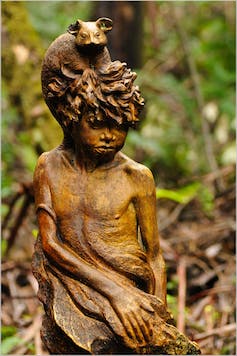 Gushy mawkishness: a statue of a child at the sanctuary. r.reeve/flickr, CC BY

The William Ricketts Sanctuary, or as the eccentric “Bill” Ricketts would have preferred it to be called, “The Forest of Love”, is a curious and somewhat disturbing anachronism that remains a popular drawcard. According to the information panel at the entrance to the sanctuary, now managed by Parks Victoria, it is a “place of beauty and tranquillity”. Visitors enjoy this ambience as they wander along a network of meandering paths beneath majestic mountain ash trees on a steep hillside.

Scattered here and there, and in the occasional alcove, is an assortment of 92 ceramic sculptures. These mostly comprise bearded Arrernte and Pitjantjatjara men, fewer women, many children, an assortment of native fauna, and Ricketts himself in various poses. In one, his torso emerges from the body of a kangaroo. Another is a sacrificial scene in which Ricketts and an Aboriginal elder appear suspended side-by-side on crosses. And in another, both he and an Aboriginal elder swirl out of the rock itself.

“It’s so peaceful here,” I recently overheard a visitor say to a staff member at the information centre, who responded: “Everyone says that.” 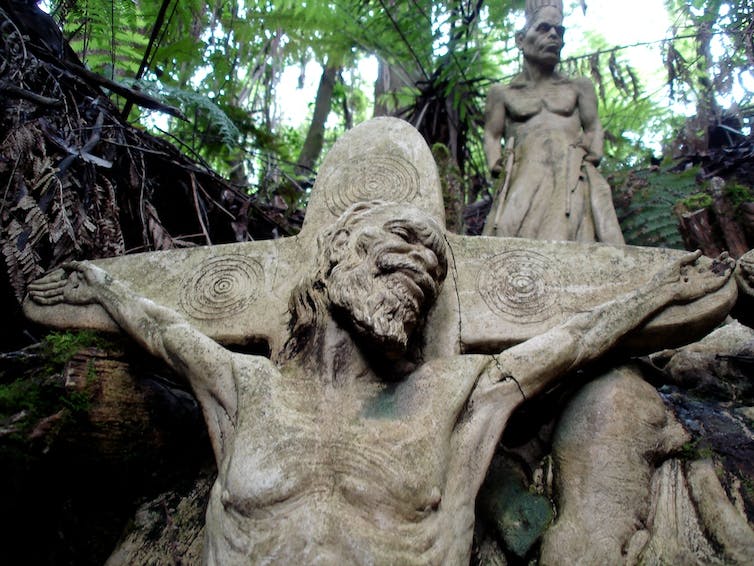 Ricketts lived in austere conditions at the sanctuary from 1934 until his death in 1993 aged 94. A technically accomplished ceramicist, he used his considerable skills to express in sculptural form his eccentric beliefs, at the heart of which were concerns that today are more mainstream. Espousing sensitivities well ahead of his time, Ricketts railed against what he saw as ever-increasing, wide-scale environmental destruction. He also took an interest in Aborigines and was an early advocate for Aboriginal rights. 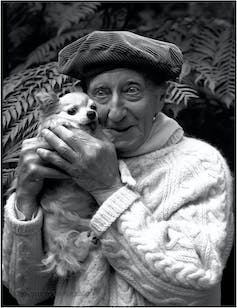 Beyond those with specialist interest (anthropologists, for example) and policymakers, concern for Aboriginal welfare in mid-20th-century Australia was not one of great public agitation. Taken alone, these two motivations of Ricketts were in many ways laudatory. However, how he fused both concerns into his holistic beliefs and his representations of himself as the hero – or at least the personal and spiritual embodiment of those beliefs – is problematic.

At its most basic, Ricketts’ philosophy arose from a belief that “All life is one”, and that the earth itself was the source of all of life’s flora, fauna, humankind—animating numen. The clay out of which Ricketts formed his sculptures not only allowed him access to this; the artist believed he too was of the earth: “I just have to touch the earth and I touch myself … I am the true essence of … life, the earth, the clay”.

Over time Ricketts came to believe he had risen above the status of his own humanity and was now a transcendent being. His narcissism extended to believing that he had been “called to the defence of the Aborigines and the continent”. As he explained: “My creator worked through the Australian Aborigine to get hold of me.”

Ricketts made a number of trips to Central Australia to experience life with Aborigines and, perhaps more primarily, to have access to life models for his sculptures. His first excursion was to Ernabella in the late 1940s. The visit was characterised by misunderstandings and tensions. Among various issues was the failure of the Anangu people to act in accordance with the role Ricketts had imagined them fulfilling. 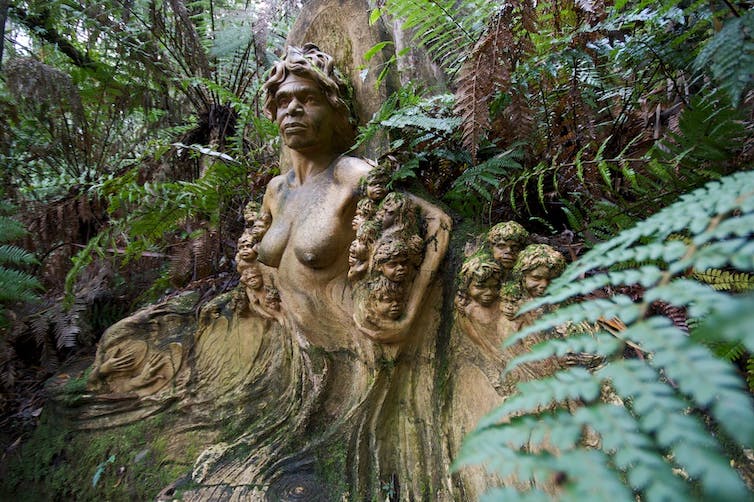 At best they regarded him with suspicion. In the mid-1950s Ricketts again pilgrimaged to Central Australia and spent time based in Alice Springs, Haasts Bluff and Utopia. Again there were various difficulties, but ultimately these were more successful ventures than his earlier experience at Ernabella, not the least reason being the greater Aboriginal propensity for tolerating eccentricities.

Nevertheless, even at Ernabella as elsewhere, Ricketts found the life models he sought. The Aboriginal figures displayed in the damp, cool, ferny, mossy Dandenongs hillside are incongruously modelled on Central Australian Aborigines.

The sanctuary’s audio tour assures visitors that the “faces are all real people, who allowed Bill to model their likeness in clay”. The twin sculptures looming over the entrance path are described in the “tour” as “Pitjantjatjara clansman emerging as a flowing of spiritual life from the earth, permitting you to enter this sacred place”.

The slippage from “sanctuary” to “sacred” is revealing, for by what process and how did this public reserve become sanctified? And should it be Pitjantjatjara clansman permitting entry or, more appropriately, members of the local Wurundjeri-balluk and Wurundjeri-willam clan groups? 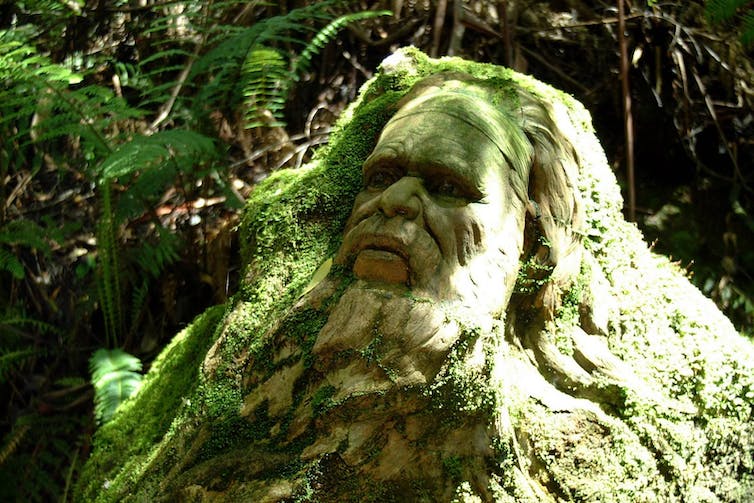 The faces of sculptures are said to be all ‘real people’. Travelling Pooh/flickr, CC BY-ND

Throughout the sanctuary, on numerous kiln-fired clay plinths, Ricketts explains his convoluted beliefs. Among these are his sense of himself as an Aborigine and, if not presently, he certainly once had been. Near one of the figures of himself and close to where his ashes are buried is a plinth that reads in part:

My past Aboriginal tribal life indivisibly linked to my present life and timeless future.

Another plinth proclaims “Rebirth I return to the point of origin in self in the Alchera”, Alchera being a contemporary variant of the Arrernte word “Alcheringa” which references the Dreaming (Altyerrenge in today’s orthography). Yet another plinth proclaims: “To melt and become as the living waters running and singing a flow of life in my Dreaming”.

In the sanctuary’s DVD presentation Ricketts asserts he is “of the lyrebird totem”. The audio tour’s explanation of yet another figure of Ricketts equates his ostensible suffering — over environmental devastation among other things — with the suffering of the Aborigines. 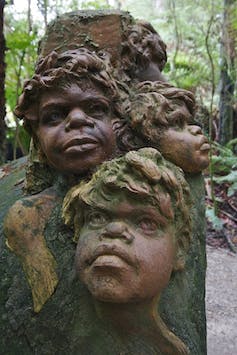 Giving physical form to the gushy mawkishness of “all life is one”, several sculptures feature different animals in various ways, on, entwined around or surrounding the human figures.

Another example of Ricketts’ guiding mushiness was that, “The beautiful unity of all mankind is the early years of childhood”. These two animating principles give context to many of the sculptures, as well as highlighting so much of what is problematic about them.

Although Ricketts’ holistic philosophy imagined or intended no disrespect — in fact the contrary — the explicit linking of Aborigines with nature provides further endorsement of earlier racist ideologies that posited Aborigines as belonging with the animals rather than with humans. Furthermore, another racist epithet described Aborigines as childlike, a people guided by emotion rather than reason, and intuitive not rational.

Ricketts’ philosophy is steeped in primitivism, and his exemplar is Australian Aborigines. The belief is that modernity and civilisation have stripped away core elements of our humanity, elements that are still retained and discernible in those peoples living in a so-called state of nature. 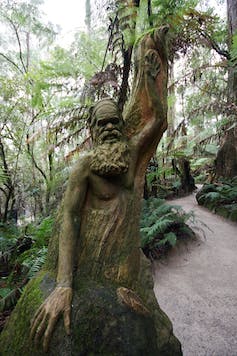 Unconcerned with the subtleties of cultural variation, the very few Central Australian Aborigines Ricketts encountered on his pilgrimages were held to be representative of all Aborigines. He afforded Aboriginal cultures and people no independent integrity. Instead he made them actors in his personal crusade and costumed them accordingly. It is no mitigation that Ricketts also saw himself as at one with the birds and the bees so to speak.

To the extent that Ricketts used Aborigines to help him realise his own convictions, an argument of exploitation can easily be made. However, with notable exceptions, few private citizens in mid-20th-century Australia were advocating on behalf of Aborigines, and few were arguing that virtue rather than vice was the hallmark of their cultures. Ricketts was doing so.

Which brings us to today. Just as Ricketts railed against deforestation and other ravages against the natural environment, it would be easy to rail against Ricketts’ sculptural representations of Aborigines and the causes he bent them to. There’s any number of dime-a-dozen postcolonial theories and a grab-bag of deconstructionist implements in the cultural studies toolkit that would permit a readily theorised censoriousness.

Answering the straightforward question of “what on Earth are these Central Australian Aborigines doing in the Dandenong Ranges?” would be one place to start a rigorously theorised exposure of rampant and self-indulgent exploitation. 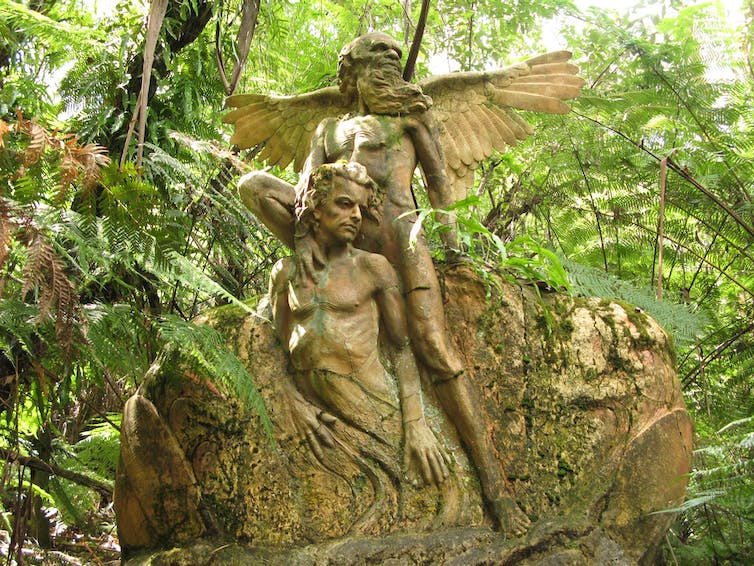 A sculpture of Ricketts and a winged figure. Wikimedia Commons

Another pertinent question would be: “Why has this not already been done?” The same theories and toolkit would readily also provide answers to this. Only the censoriousness here would extend beyond Ricketts to encompass societal unconscious bias – if not racism that allows people to overlook what is staring them in the face.

Perhaps though, and notwithstanding the fact that the sculptures are problematic, they might provoke more sanguine contemplation. Popular with children whose parents take advantage of the free entry during school holidays, could the sculptures and their incongruous setting prompt a more nuanced consideration of Aboriginal affairs?

The capacity of viewers (and readers) to bring discernment to what they are seeing and reading is too often ignored. The contrast between these idealised images, with their utopian underpinnings, and the range of other representations and media reports about Indigenous Australians is sufficient to prompt wonder, a curiosity to know more.

The sanctuary should recognise and respond to this. In doing so, it should do something more than offer an unmediated hagiographic representation of Ricketts and his sculptures.

Signage and audio tour narrative contextualising the work and explaining its fit within exploitative discourses such as primitivism would help add nuance and relevance, and increase understanding.

Marcia Langton and Bruno David have provided one of the sanctuary’s very few scholarly critiques. Notwithstanding the sanctuary’s contradictions, they observe that “the maudlin, romantic style of Ricketts’ authorship enables … [his] dose of nostalgic racism to be swallowed with a measure of safe, sanitised Utopian idealism”.

Nevertheless, for all its strangeness, it is possible that the sanctuary promotes an image of Aboriginality that fosters an empathy that might resonate round the family dining table. Far more so than any alienating and hectoring missive explaining what racists we all are for failing to grasp the “violence” — a faddish label favoured by those portending the consequences of words and images — to be found there.