In our Great Australian Plays series, we nominate the best of Australian drama.

If Australian drama came of age in the 1940s and 1950s, in the 1970s it reached full maturity. More work by more playwrights by more companies for larger audiences: this is the basic narrative of the period. The AusStage database indicates that between 1970 and 1979, local productions of Australian plays more than doubled. And if the standard of that drama could be variable, there is no doubting the craft, intelligence and audacity of its peak achievements.

Looking at just a few plays from the 1970s, as I do here, does not give a real sense of their range and diversity, however. Nor does it suggest why an increase in the quantity of Australian drama changed how it was regarded qualitatively. The 1970s transformed both what Australian plays were, and what artists and audiences thought they could be. The future of the art form, not just its present reality, was altered during this crucial decade.

It also changed the way Australia drama was seen internationally. My very English father was appalled by the Royal Court production of Don’s Party that my very Australian mother dragged him to in 1975. But staging it in the temple of British playwriting demonstrated that the cultural cringe had abated. The Empire was writing back to the Centre; and writing differently to itself.

In a more extended examination of the drama of the period, I would certainly touch on John Romeril’s body of theatre work, especially The Floating World (1974), which, along with Alan Seymour’s One Day of the Year (1960), is one of the best plays about the social and psychological aftereffects of war. 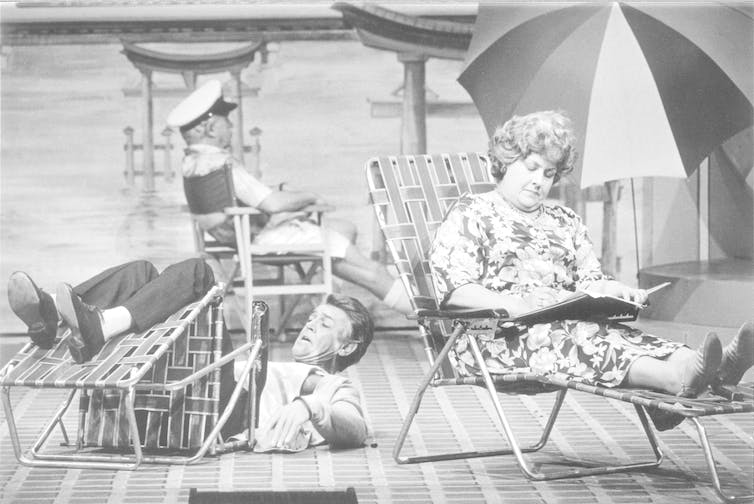 Frederick Parslow as Les, Brian James as Robinson, Marion Edward as Irene in The Floating World performed at the Melbourne Theatre Company in 1982. Photographer David Parker.

In The Floating World, Les Harding, a blue-collar, World War II vet, is on a holiday cruise to Japan. Unable to escape his memories of forced labour as a POW on the infamous Burma-Thailand railroad, he hallucinates that the Malaysian waiter is a Japanese army officer. As the action unfolds, Les’s racism and sexism are the objects of both satire and sympathy. He plunges into a traumascape where past and present disastrously collide, while Romeril ticks his play through a dial of different styles from naturalism to vaudeville.

I would look, too, at the drama of Ron Blair, particularly his one-person play, The Christian Brothers, which I saw staged by the Melbourne Theatre Company with Peter Carroll in 2003 (Carroll premiered the play in 1975, thus performing it, on and off, for 28 years).

I would examine Alma de Groen’s The Sweatproof Boy (1972), and its synergies with Joe Orton’s genre-defying Entertaining Mr Sloane.

And I would also discuss her shorter play, The Joss Adams Show (1972), one of the finest of its type I have read. The meta-theatrical format of the TV interview is a favoured one for 1970s playwrights. Joss Adams is (apparently) being questioned about her experiences as a young mum. Elegant, clinical and devastating, only at the end of the play does it become clear she is suffering post-natal depression. The bag at her feet contains the body of her dead baby.

A lesser known stand out

A perhaps lesser-known stand-out play of the era is John O’Donoghue’s realistic (but not entirely so) A Happy and Holy Occasion (1976). O’Donoghue’s work - rooted in Novocastrian history and experience - is representative of drama developed not in Australian capital cities, but in our regions. These remoter towns and localities have produced a rich parade of playwriting talent: Wollongong (Katharine Thompson), Geelong (Ross Mueller), Maitland (Nick Enright), Rockhampton (Angela Betzien), Yarloop, WA (Jack Davis) and many more.

The action of A Happy and Holy Occasion unfolds over a single evening in 1942, in a house in Mayfield West, a working class suburb of Newcastle. Christy O’Mahon, the 12-year old son of Mary and Denny, a steelworker, is about to leave home and enter the Minor Seminary in preparation for the priesthood.

To celebrate this apparently welcome event, a variety of people are invited to dinner: Tocky Keating, Denny’s tight-fisted mate and fellow migrant (“the gloomiest Irishman I ever met”); “Houses” O’Halloran, Mary’s unscrupulous, entrepreneurial Novocastrian father; Miss Siss, a religious heiress, from whom the family hope for a bequest; Father O’Gorman, a dissolute Irish priest starting to question his vocation; and Breda Mulcahy, a local barmaid, Mary’s best friend, whose sluttish reputation belies the fact that she is demonstrably the most generous and compassionate there.

Over the course of the night, a series of half-comic, half-tragic encounters leads to an escalating pattern of revelations and a storm of rage, disgust, recrimination and despair. Tocky and Mary attack one another with increasing viciousness. When it becomes clear Mary has feelings for Father O’Gorman, she is beaten first by her husband, then by Tocky. Miss Siss is revealed as a “great pharisee” and an oppressor of the poor. “Houses” is shown as sympathetic to the Fascist cause his country is desperately fighting, while O’Gorman, sliding into alcoholic stupor, cannot find the courage to speak out against co-opting a boy to a way of life whose values he seriously doubts.

To all this, Christy remains oblivious: a still centre of fragile innocence amidst the chaos of family destruction. His obliviousness has its equivalent in the adult realm. Hanging over the evening is the impending fall of Singapore – an event symbolizing the nadir of the war for the Allies and the moment of greatest vulnerability for Australia. The play ends, with Tocky and Denny insensible, and Breda cradling Christy in her arms, reciting the Sorrowful Mysteries.

If scrupulous realism were all that A Happy and Holy Occasion offered, it would be triumph enough. However, it also contains a moment of breathtaking originality that, while unique to O’Donoghue’s play, is exemplary of the imaginative brilliance to be found in 1970s Australian drama as a whole.

Half way through Act II, the long-awaited 10 o’clock news announces Japanese troops are on the outskirts of Singapore. Then the radio fades and,

CHRISTY rises and very formally and slowly, with biretta on head, walks to the right side of the darkened apron of the stage and takes up a position facing left.

Bells toll and Miss Siss stands opposite Christy. Together they name the dates and circumstances of each character’s death, who take their place in a line facing the audience: Tocky, dead from dysentery, in the New Guinea jungle; Breda, ‘carried out to sea with her lover, both of whom were swimming in the nude’; O’Gorman, ‘spiritually drowned’ by breaking his vow of chastity; Denny, ‘death by burning’, incinerated in a shower of molten chrome; Mary, ‘death by mental burning’, insane after Denny’s death; ‘Houses’, dead from a heart attack in a pub, ‘dying laughing without the benefit of the sacraments’; and finally Miss Siss, dead of old age at 99, leaving all her money to the church ‘for masses to be said for her soul. In perpetuity’.

After each death is announced, the characters take up their rosary beads and pray. At the end of the sequence, they return to their former places, and the play continues as normal.

Here we see how a play can honour its form while breaking with the conditions that have hitherto constrained it, creating a sequence of action in an entirely different register. By doing so, it invites actors and audience to participate in a shared risk, raising the drama to a new level of intensity.

It’s a bravura piece of playwriting, a reminder of how flexible, ingenious and powerful stage drama can be.

Two final comments, closely related to each other, before leaving the 1970s. The first is that a list of plays and playwrights does not do justice to the other artists necessary to give drama proper stage life. Theatre is a collaborative medium, never more so than in this decade, when companies like the Pram Factory, Nimrod, Troupe, and La Mama provided environments where writers rubbed shoulders with actors, directors, designers, composers, and producers in sometimes tense, but more often productive intimacy. It is important, when celebrating the drama of our past, to remember the creative context in which it was realized.

A question I am often asked is why, if 1970s plays are so good, they aren’t revived more often. The answer is the same: that these plays were written for a particular creative context – indeed, often for particular artists – and without this context they are less accessible and less stage-able.

Australia is a country impatient of history. To suggest to a theatre company today that considerable effort needs to go into creating the right conditions for successfully reviving 1970s drama is to invite a sour look.

We’ll do it for Shakespeare, but not Steve Spears; for David Hare, but not Dorothy Hewett. This is slowly changing. Over the last 10 years, plays from the period have been successfully revived, at Sydney’s Griffin Theatre (Nimrod’s first home), for example. But there is still a long way to go.