The wellbeing of Indigenous people is based around having the freedom and resources to practise cultural ways of being. While some of these can seem removed from those in the West – such as the lack of materialism, primacy of kin and a close relationship to the natural world – including them in mainstream culture can contribute to everyone’s wellbeing.

One way Aboriginal culture differs from the West’s is in its healing practices. These involve mindfulness and attention to relationships with all living things, as well as seeking the advice and treatments of traditional healers.

Yet Aboriginal traditional medicine has been neglected in Australia. This is out of step with international instruments, such as Article 24 of the United Nations Declaration on the Rights of Indigenous Peoples, which states:

Indigenous peoples have the right to their traditional medicines and to maintain their health practices, including the conservation of their vital medicinal plants, animals and minerals.

To close the gap, we must address the construction that the cultural ways of Aboriginal people are shallow, meaningless or even toxic. Such colonising tropes are a barrier to creating the kind of freedom necessary for Indigenous Australians to live healthy lives.

Ngangkari are Aboriginal healers of the Anangu of the Western Desert in Central Australia, which includes the Pitjantjatjara, Ngaanyatjarra and Yankunytjatjara peoples. In some places, particularly South Australia, ngangkari are increasingly being brought into Western health settings to work beside doctors.

Their skills come from a lifetime of immersion in cultural ways of being. Ngangkari are recognised as having particular facilities for healing in their infancy or childhood and are then encouraged to develop their skills. They often talk about being taught by their grandparents.

Ngangkari are immersed in Aboriginal ways of being and cannot easily translate what they do to a wide audience. And the way they work cannot be explained through the scientific framework Western understanding demands.

Read more: Aboriginal people – how to misunderstand their science

Ngangkari methodology for healing includes techniques such as observing, listening and touch. With massage and rubbing they release “blockages” from the body and apply various herbal tinctures and ointments where required. 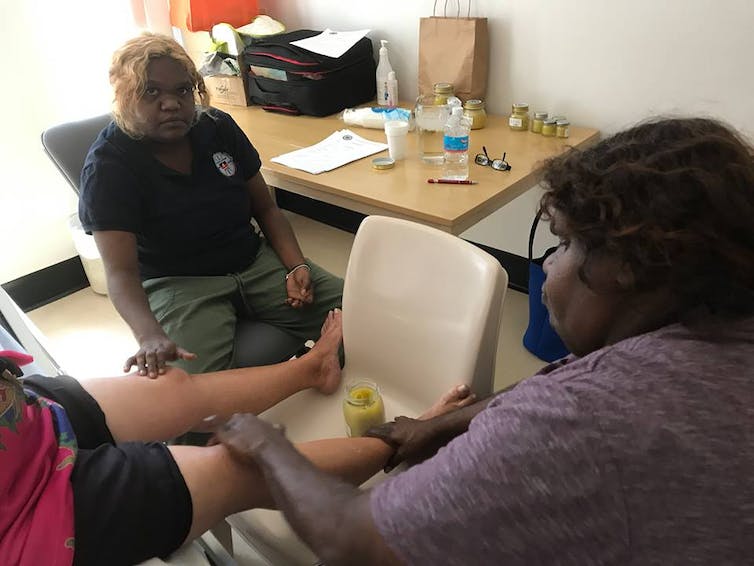 There is an understanding that the spirit can become dislodged through trauma, causing mental and physical disorders. Ngangkari bring it back into place. They are particularly adept at treating psychological disorders.

As the ngangkari Naomi Kantjuriny said:

Depressed people can feel a lot better within themselves after a ngangkari treatment. That’s one of our specialities. Their spirits are out-of-sorts, and not positioned correctly within their bodies. The ngangkari’s job is to reposition their spirits and to reinstate it to where it is happiest.

My experience with ngangkari treatment

I had my first consultation with two ngangkari Pitjanjatjara women, Debbie Watson and Margaret Richards, in 2016.

Their diagnostic process was simple and low-key – very different to any other medical examination I’d had. It involved assessing my whole naked body. I was aware of the deep scrutiny applied to posture and movement.

Both women were touching me, a very delicate touch. As one massaged my abdomen and removed a “blockage” there, they entered into conversation in language. They then spoke to me of my state of mind. They described a personal dilemma causing me a great deal of sadness, that they had no way of knowing.

Debbie said: “There is a man far, far away. Too much worry. No, too much sadness.”

My partner was on the other side of the world and not well, but I had pushed this to the back of my mind. I was surprised they were able to recognise that I had pushed my personal needs aside and this was affecting my health. This brought home to me that I needed to be more proactive in attending to my wellbeing.

Later I felt the benefit of the removal of the “blockage” in my body. I felt lighter, had more clarity of thought and a sense of relief.

Individual doctors who have worked with Aboriginal people have long recognised the value of ngangkari. In 2008, the anthropologist Brian McCoy wrote of the demand for the services of maparn, the traditional healers of the Kimberley region. He explored the benefits of traditional and Western models of health care working together to improve desert people’s health.

Italian researcher, and now CEO of the Aṉangu Ngangkaṟi Tjutaku Aboriginal Corporation (ANTAC) based in Adelaide, Dr Francesca Panzironi, has spent the last decade working with the ngangkari to help them bring their services to the broader community. She conducted research and produced a report on Aboriginal traditional healing practices. This explored how ngangkari healers work alongside doctors and medical staff in community clinics and often visit Adelaide to attend to Indigenous hospital patients.

Read more: How discrimination and stressful events affect the health of our Indigenous kids

Dr Panzironi says that ngangkari accept the benefits of both Western and traditional methods when a person is ill. After treating a person spiritually and psychologically, the ngangkari might treat the person’s physical problems as well, but will often recommend they also see a Western doctor.

But the ngangkari aren’t recognised in the Australian health system. While other health professionals can expect to be paid, they cannot. There is no category for “ngangkari services” in government payments for health care as well as in the private health sector. And Australia’s drug regulator, the Therapeutic Goods Administration (TGA), has not listed ngangkari medications as either safe or beneficial.

What ngangkari seek is the right to practise in the same way as any other paramedical service in the Australian system. While various societies around the world recognise the value of healers who are culturally rather than scientifically based, Australia is lagging behind.

This afternoon, we will publish an article exploring five traditional medicines used by Indigenous healers.