A recent article in The Conversation questioned whether we should all get flu vaccinations, given 99 people would have to go through vaccination for one case of flu to be prevented.

But this position ignores the purpose of immunisation programs: whole populations of people need to take part for just a small number to benefit. So how do we decide what’s worth it and what’s not?

Read more: The flu vaccine is being oversold – it's not that effective

When we consider a treatment for a patient, such as antibiotics for an infection, we first consider the evidence on the benefits and potential harms of treatment. Ideally, this is based on clinical trials, where we assume the proportion of people in the trial who respond represents the chance an individual patient will respond to treatment.

This evidence is then weighed up with the individual patient. What are the treatment options? What do they prefer? Are there factors that might make this patient more likely to respond or have side effects? Is there a treatment alternative they would be more likely to take?

In public health, the framework is the same but the “patient” is different – we are delivering an intervention for a whole population or group rather than a single individual.

We first consider the efficacy of the intervention as demonstrated in clinical trials or other types of studies. We then look at which groups in the population might benefit the most (such as the zoster vaccine, given routinely to adults over 70 years as this group has a high rate of shingles), and for whom the harms will be the least (such as the rotavirus vaccine, which is given before the age of six months to reduce the risk of intussusception, a serious bowel complication).

Compared to many other public health programs, immunisation is a targeted intervention and clinical trials tell us they work. But programs still need to target broad groups, defined by age or other broad risk factors, such as chronic medical conditions or pregnancy.

Risks and benefits of interventions

When considering vaccination programs, safety is very important, as a vaccine is being given to a generally healthy population to prevent a disease that may be uncommon, even if serious.

For example, the lifetime risk of cervical cancer is one in 166 women, meaning one woman in 166 is diagnosed with this cancer. So even if the human papillomavirus (HPV) vaccine was completely effective at preventing cancer, 165 of 166 women vaccinated would not benefit. Clearly, if we could work out who that one woman was who would get cancer, we could just vaccinate her, but unfortunately we can’t.

It’s only acceptable to vaccinate large groups if clinically important side effects are low. For the HPV vaccine, anaphylaxis (a serious allergic reaction) has been reported, but occurs at a rate of approximately one in 380,000 doses.

Vaccination has almost eliminated infection with this strain (although other serotypes still cause meningococcal disease). But this means 13,332 of 13,333 children didn’t benefit from vaccination. Again, this is only acceptable if the rate of important side effects is low. Studies in the US have not found any significant side effects following routine use of meningococcal vaccines.

This is not to say there are no side effects from vaccines, but that the potential side effects of vaccines need to be weighed up against the benefit.

For example, Guillain Barre syndrome is a serious neurological complication of influenza vaccination as well as a number of different infections.

But studies have estimated the risk of this complication as being around one per million vaccination doses, which is much smaller than the risk of Guillain Barre syndrome following influenza infection (roughly one in 60,000 infections). And that’s before taking into account the benefit of preventing other complications of influenza.

Read more: Is the end of Zika nigh? How populations develop immunity 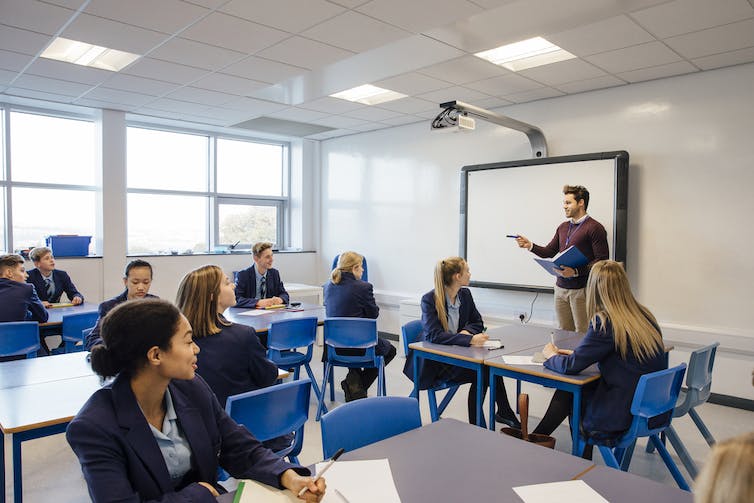 High schools are bigger, so immunisation is easier than at primary schools. from www.shutterstock.com

What other factors need to be considered?

We also need to consider access, uptake and how a health intervention will be delivered, whether through general practices, council programs, pharmacies or school-based programs.

Equity issues must also be kept in mind: will this close the gap in Indigenous health or other disadvantaged populations? Will immunisation benefit more than the individual? What is the likely future incidence (the “epidemic curve”) of the infection in the absence of vaccination?

A current example is meningococcal W disease, which is a new strain of this bacteria in Australia. Although this currently affects individuals in all age groups, many state governments have implemented vaccination programs in adolescents.

This is because young adults in their late teens and early 20s carry the bacteria more than any other group, so vaccinating them will reduce transmission of this strain more generally.

But it’s difficult to get large cohorts of this age group together to deliver the vaccine. It’s much easier if the program targets slightly younger children who are still at school (who, of course, will soon enter the higher risk age group).

In rolling out this vaccine program, even factors such as the size of schools (it is easier to vaccinate children at high schools rather than primary schools, as they are larger), the timing of exams, holidays and religious considerations (such as Ramadan) are also taken into account.

Read more: What is meningococcal disease and what are the options for vaccination?

For government, cost effectiveness is an important consideration when making decisions on the use of taxpayer dollars. This has been an issue when considering meningococcal B vaccine. As this is a relatively expensive vaccine, the Pharmaceutical Benefits Advisory Committee has found this not to be cost effective.

This is not to say that meningococcal B disease isn’t serious, or that the vaccine isn’t effective. It’s simply that the cost of the vaccine is so high, it’s felt there are better uses for the funding that could save lives elsewhere.

While this might seem to be a rather hard-headed decision, this approach frees up funding for other interventions such as expensive cancer treatments, primary care programs or other public health interventions.

When we treat a disease, we expect most people will benefit from the treatment. As an example, without antibiotics, the death rate of pneumonia was more than 80%; with antibiotics, less than 20%.