Much of southern Australia is experiencing severe drought after a very dry and warm autumn across the southern half of the continent. Australia is no stranger to drought, but this recent dry spell, and Prime Minister Malcolm Turnbull’s visit to drought-stricken parts of the country, has prompted discussion of the role of climate change in this event.

Turnbull said that farmers need to “build resilience” as rainfall “appears to be getting more variable”. This prompted former Nationals leader John Anderson to warn against “politicising” the drought by invoking climate change. This in turn was followed by speculation from numberous commentators about the links between climate change and drought.

So are droughts getting worse, and can they be attributed to climate change? Drought is a complex beast and can be measured in a variety of ways. Some aspects of drought are linked with climate change; others are not.

Recent warm and dry conditions have resulted in drought over parts of southern Australia. Bureau of Meteorology

How do we measure drought?

In Australia, the Bureau of Meteorology uses rainfall deficiencies to identify regions that are under drought conditions.

Droughts are also exacerbated by low humidity, higher wind speeds, warmer temperatures, and greater amounts of sunshine. All of these factors increase water loss from soils and plants. This means that other metrics are often used to describe drought which go beyond rainfall deficiencies alone. These include the Palmer Drought Severity Index and the Standardised Precipitation Evaporation Index , for example.

This means that there are hundreds of metrics which together can provide a more detailed representation of a drought. But this also means that droughts are less well understood and described than simpler phenomena such as temperature and rainfall.

Hydrological drought, often defined by a period of low streamflow, is a response to numerous upstream processes that are unique to each river system. Hydrologists and water planners therefore often focus on directly observing and modelling runoff from water catchments.

The point here is that droughts can be multidimensional, affecting agriculture and water supplies on a wide range of spatial and temporal scales. A seasonal-scale drought that reduces soil moisture on a farm, and a decade-long drought that depletes reservoirs and groundwater supplies, can both be devastating, but in very different ways.

As we have so many ways of looking at droughts, this is a more complex question than it might first sound. Climate change may affect these drought metrics and types of drought differently, so it is hard to make general statements about the links between human-induced climate change and drought.

We know that over southern Australia, and in particular the southwest, there has been a rapid decline in winter rainfall, and that this has been linked to climate change. In the southeast there has also been a decline but the trend is harder to distinguish from the year-to-year variability. 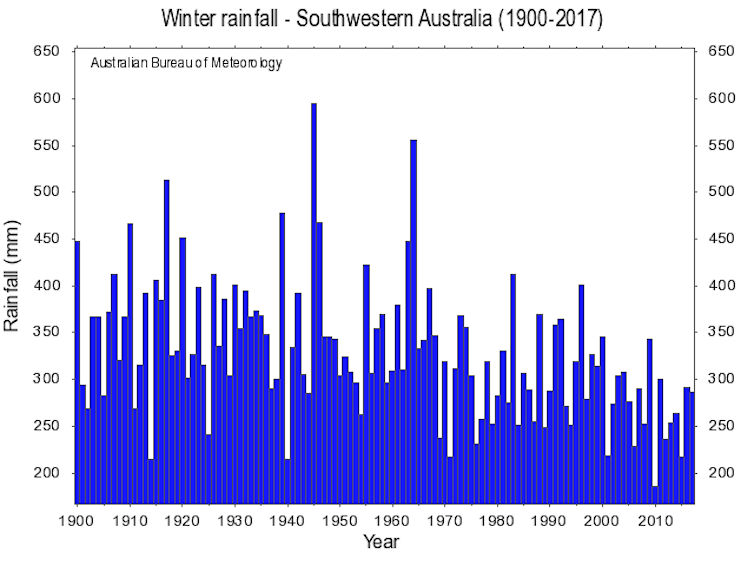 Winter rainfall in Southwestern Australia has been in decline since the 1960s. Bureau of Meteorology

For recent short-term droughts in southern Australia, analyses have found an increased likelihood of rainfall deficits related to human-caused climate change. Also, it has been suggested that the character of droughts is changing as a result of the human-induced warming trend.

Read more: Recent Australian droughts may be the worst in 800 years

There is some evidence to suggest that widespread and prolonged droughts, like the Millennium Drought, are worse than other droughts in recent centuries, and may have been exacerbated by climate change. But the role of climate change in extended drought periods is difficult to discern from background climate variability. This is particularly true in Australia, which has a much more variable climate than many other parts of the world.

Future projections of drought are also difficult to constrain, as they vary across Australia and depend on the measure of drought being used. Climate models project a continuing decline in rainfall over southern Australia over the next century. Dry conditions like those seen in southeast Australia in 2006, for example, are projected to become more frequent under even low global warming targets associated with the Paris Agreement. Rainfall projections for other parts of the continent are more uncertain.

Read more: Why 2℃ of global warming is much worse for Australia than 1.5℃

Rainfall is projected to become more extreme, with more intense rain events and fewer light rain days. This would potentially influence what future droughts look like, and how and where water moves through the land.

River flows are also projected to decline in parts of the country, with consequences for water supply to cities, ecosystems and agriculture. In the southwest, declining rainfall has led to drastic reductions in river flows since the 1970s. This trend is expected to continue. Elsewhere, changes are more uncertain but studies have suggested that the southeast could also experience declining river flows in the coming decades.

Part of the challenge of projecting future change is related to how temperature and precipitation vary together. The relationship is a double-edged sword. Increased greenhouse gas emissions mean an increased probability that low-precipitation years are also warm, suggesting that under climate change droughts may be hotter in some parts of the world. But dry conditions also often result in warmer local temperatures, increasing water loss from soils and plants.

Read more: El Niño is here and that means droughts, but they don't work how you might think

Compared with other extreme weather types, it is hard to make useful statements about how climate change is altering droughts and their impacts. Protracted droughts are also rarer than many short-term natural hazards such as heatwaves. We need much longer records to reliably understand how they are changing, but these are not always available. 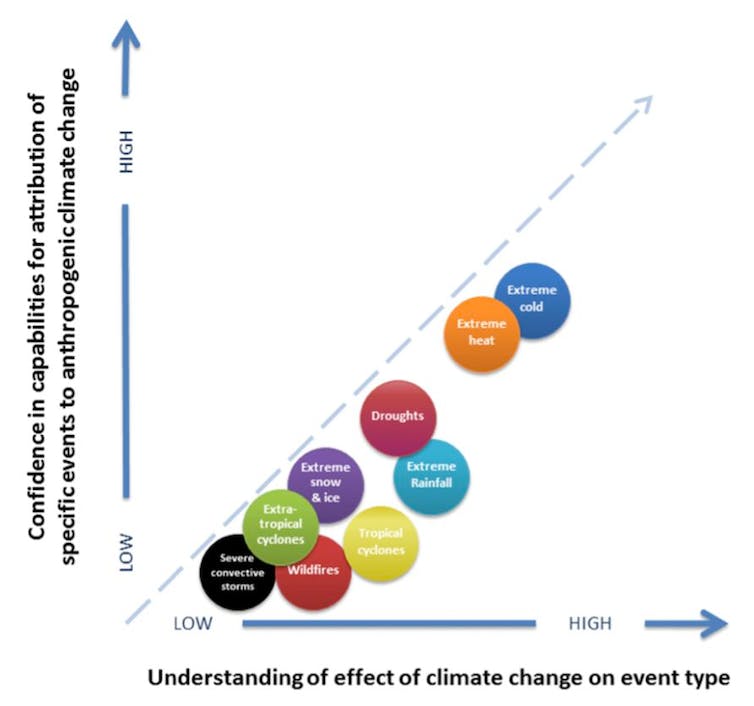 Compared to heatwaves and cold spells it is harder to assess the role of climate change in droughts. National Academy of Science

There is some evidence to suggest that climate change is exacerbating drought conditions in parts of Australia, especially in the southwest and southeast. Much more work is needed to understand the intricacies of the effects of climate change on different aspects and types of drought.

With the uncertainties of a rapidly changing climate we need to bolster our adaptation plans so we are ready for the next big dry.