For the past 20 years, Australia has attempted to stake its claim in the lucrative commercial space industry.

In some aspects we have done quite well. There is no doubt that we have some of the most advanced ground systems in the world, and our open, relatively unpopulated geography makes the Australian continent ideal for operations such as the Square Kilometre Array.

But despite our accomplishments on the ground, there has been very limited success for Australians wanting to get to space from our continent.

Read more: As the details emerge on Australia's new space agency, we (might) finally have lift-off

The enactment of the Space Activities Act 1998 (Cth), one of the first examples of a domestic commercially focused space law, was prompted by the plans by Kistler Aerospace to establish a spaceport at Woomera.

That Act was focused on the operations that were taking place at the time. Australia was seeing significant interest from overseas entities who wanted to capitalise on our geography for launching rockets.

Fast forward to 2018, and no commercial launch operator has yet established themselves in Australia.

Rather, we have a burgeoning commercial interest in low-cost, high-volume cube sats for Internet of Things applications.

In 2015, the federal government announced a review of the Space Activities Act, recognising that regulation is just as significant a barrier for the space industry as the cost involved.

In early 2017, after a significant consultative period, the Department of Industry, Innovation and Science (DIIS) recognised the need for reform, recommending that the Space Activities Act be replaced.

Rise of the space agency

In the intervening time, the government also announced the Space Capability Review and accepted its recommendation of the introduction of an Australian Space Agency.

That agency, to be headed by former CSIRO boss Megan Clark AC, will come into being on July 1, 2018. Many people consider the move to be a reaffirmation of Australia’s interest in the space domain.

More than a year after the legislative proposal paper was released by the DIIS, the Space Activities Amendment (Launches and Returns) Bill 2018 received its second reading in the House of Representatives on May 30, 2018, with little fanfare or coverage.

Despite the lengthy period of consultation and the initial statements that an entirely new Act would be drafted, this is a revision of the already existing legislation. It does little to inspire confidence in the government’s approach to an Australia commercial space industry.

This Bill purports to broaden regulatory frameworks, expand the scope of the Act, reduce costs to operators, and reduce barriers to entry.

In some ways, it will achieve these goals. There is a reduction of the insurance requirements for operators, from a world-leading A$750 million to a far more competitive A$100 million.

The bill facilitates the launch of space objects from aircraft, will recognise the prevalence of overseas markets for launch operations, and introduce the ability to launch rockets reaching an altitude less than 100km - Australia’s regulatory demarcation of outer space.

Read more: Small sats are vital to Australia's space industry – and they won't be space junk

As noted above, the changes to the Act are dwarfed by the content that is merely left in place. Operators previously complained of an Act that is vague, difficult to navigate, and with prohibitive compliance costs.

Most of the changes embodied within the bill are merely in name only. A “Space Licence” becomes a “Facility Licence” with the only substantive reduction in pre-licence compliance being that the licence is no longer restricted to corporations.

The “Overseas Launch Licence” is renamed the “Overseas Payload Permit”, but is not matched with any substantive changes. This would see an Australian who wishes to launch a rocket overseas need a payload permit to launch their rocket.

Further, and of significant concern to commercial operators considering whether they should base their operations in Australia or move offshore, is the requirement for all permits to “include a strategy for debris mitigation”.

It is not clear what form this should take or how stringently this must comply, for example, with standards such as Space Debris Mitigation Guidelines of the United Nations Committee on the Peaceful Uses of Outer Space.

If we look overseas there has been an abundance of new domestic laws that focus on promoting commercial activity while more actively aiming to protect the domain that is so important to everyday life.

Recent domestic enactments such as the British Space Industry Act 2018, the New Zealand Outer Space and High-altitude Activities Act 2017, and a plethora of US statutes recognise the need for on-orbit regulation.

Under the United Nation’s Outer Space Treaty, a country is required to authorise and continually supervise non-government activities in outer space.

Australia’s existing Act, and this new Bill, fail to do this. Regulating activities while in space is the hallmark of modern domestic space law.

Finally, there is no reference to the new Australian Space Agency. It is anticipated that the agency will be the relevant regulatory body for the purposes of the Act and its role will be articulated in the yet to be developed rules.

A slight element of unease creeps into the space industry in the face of this disconnect. It is hoped that this does not reflect any ambivalence to the future role of such an Agency nor reflect a lack of commitment to Australia becoming a driving force in the space industry. 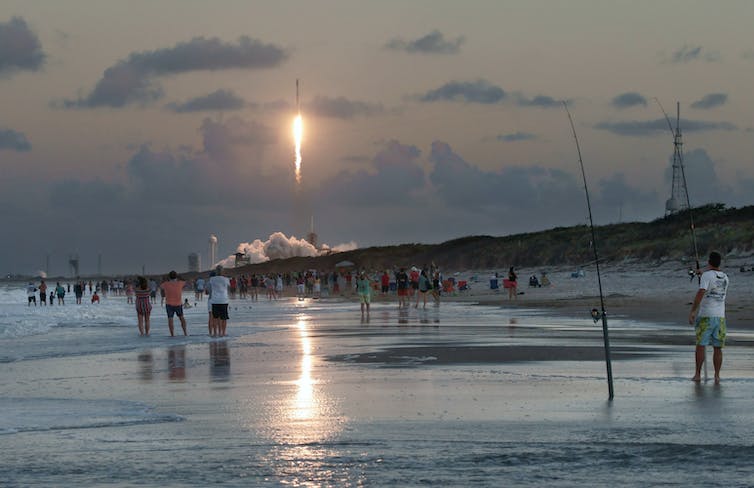 Another SpaceX launch from Florida – How long before crowds can watch a launch from Australia? Flickr/Jill Bazeley, CC BY-NC

Joel Lisk contributed to the research for this article.