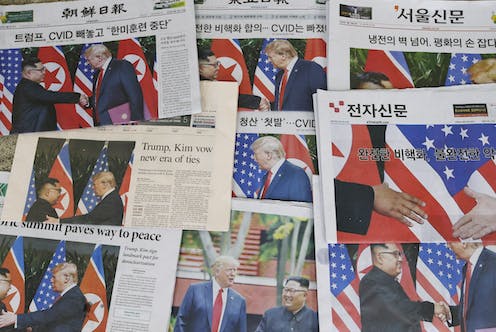 The outcome of the US-DPRK summit this week is being furiously spun. Trump supporters see an historic breakthrough by a strong leader who has stopped North Korea’s nuclear program and shown the way for true peace on the Korean peninsula. Critics see a vain and poorly-prepared leader outplayed by the wily North Korean, whose desperation for a ratings hit has sold the US and its allies down the river.

Both are plainly wrong. It is too early to tell what the lasting impact of the summit will be. Yet there are some immediate consequences that are unsettling for the US, its allies and those who have a stake in the American-led regional order.

US President Donald Trump relishes claiming achievements that have been beyond the powers of his predecessors. When offered the chance of a summit, something no one had even considered before, it is not at all surprising he leaped at the opportunity.

That foreign policy elites would have said that he shouldn’t because it would put the leader of one of the world’s truly monstrous governments on the same platform as the US president was grist in the Trumpian mill. And with the prospects of the meeting becoming the top global news story, the reality TV star’s instincts would not be denied.

Read more: US-North Korea summit agreement is most revealing for what it leaves out

Yet, by acceding to the meeting and holding it in a highly visible and orchestrated way, which placed Kim and Trump as equals, the US was giving the North Koreans something they have long craved: prestige and legitimacy. The Kim regime’s domestic propaganda is centred around imagery conveying the power of the Kims to protect North Koreans from a hostile world and bend world leaders to their will.

Trump provided an unimaginably valuable propaganda coup as well as tacit recognition of the North as a legitimate nuclear power, the regime’s most important security ambition since the 1980s.

Beyond the optics, the meeting’s most notable feature was a set of reciprocal commitments by each party. North Korea agreed to work towards the complete denuclearisation of the Korean Peninsula. In return, the US would commit to provide the North with “security guarantees”.

Both promises are vague in the extreme and represent the victory of short term optics over substantive policy agreement. Neither is a real breakthrough.

At a famous speech in 2012, then US defence secretary Robert Gates said of North Korean promises: “I’m tired of buying the same horse twice”.

Trump plainly liked the look of this North Korean nag. In return, the US promises to provide guarantees, but there is nothing concrete either in substance or timing.

Some argue this reciprocal trade is to the North’s advantage, with the language of the commitment lacking the verifiable and irreversible qualities that had previously been a non-negotiable aim of the US.

In substance, or more precisely the lack of it, neither side gave much away.

But in the press conference following the meeting, Trump put what appeared to be some substance to the vague promise. He noted the US would no longer be participating in large scale military exercises with South Korea, even hinting at an eventual full scale withdrawal of US forces from the Korean Peninsula. This seemed to confirm the critics’ worst fears — the US had sold out its South Korean allies.

The announcement came as something of a shock in Seoul and caused no shortage of angst in Japan. The issue is not operational — a scaling back or an absence of large scale exercises doesn’t make South Korea or Japan any less secure in the short to medium term.

What worries friends and allies is the thinking behind the announcement. Washington does not appear capable to taking the interests of its allies into its calculations, despite the huge benefits its relations with South Korea and Japan provide. Trump appears to think about the North Korea issue in a narrow, transactional sense and not as part of a larger US strategy.

China and North Korea have long sought division between Washington and its North-east Asian allies. Even if, as seems likely, Secretary of State Mike Pompeo and Secretary of Defense James Mattis are able to walk back what appears to be a president thinking aloud, those allies increasingly feel the security guarantees on which they depend are that bit less reliable.

Read more: Summit on, then off, now on again? The seemingly endless game-playing of US-North Korea relations

At this stage, one can only judge the atmospherics and optics of the summit. And on that basis, Beijing and Pyongyang have plainly come out ahead. Allies are unnerved by the speed with which the US has embraced Kim Jong-un and the ease with which alliance commitments can be discarded.

This strongly reinforces the growing sense of profound geopolitical change in the region. And while the North hasn’t tested missiles or bombs recently, it is continuing to stockpile fissile material to expand its nuclear arsenal. We remain a long way from Pyongyang giving up its “treasured sword”.

But we should not forget that, for the moment at least, the summit broke the cycle of escalation and acute tension that has beset US-DPRK relations in recent years. Certainly, Trump’s approach to the North had been dangerously super-heated. Some have disparaged Trump for orchestrating a step back from the brink of a war to which he had carelessly dragged us all.

Yet one shouldn’t down play the ongoing provocations of North Korean missile, engine and nuclear tests, to which Trump’s bombast was ultimately a response. A circuit breaker was badly needed, and the summit did achieve that end.

In the Trump presidency, image and TV set-pieces are the policy. Treaties and statements are not worth the paper on which they are written. Events remain extraordinarily fluid, and it is impossible to say with any level of confidence whether the summit makes a decisive pathway to peace or a momentary dip in hostilities.