Thousands of CEOs across the country will sleep “rough” tonight to raise money for homelessness. But is one night of sleeping rough enough to truly empathise with those who do it every night? And are CEOs who take part in the Vinnies CEO Sleepout just doing it as a self-serving PR stunt?

It’s easy to be cynical about fundraising campaigns and the sincerity of those who participate in them. As marketing researchers, we wanted to know what impact, if any, active campaigns like the Vinnies CEO Sleepout have on participants.

Our study, consisting of interviews with CEOs who took part in the sleepout in Sydney, found participants were quite affected. In fact, the impact of the sleepout extended beyond money raised and beyond the event itself. Besides affecting CEOs on an emotional level, many reported taking practical measures to change things in their companies to prevent homelessness.

The annual Vinnies CEO Sleepout is usually held on one of the coldest and longest nights of the year in many of Australia’s big cities. The fundraising event sees business and community leaders as well as government officials sleep outdoors. The purpose is to gain an understanding of the experience of homelessness firsthand, and to raise money for homelessness.

Not all the CEOs who participate are from the top end of town or have access to unlimited funds. Many are owner-operators, or CEOs of a small company. Some have experienced homelessness themselves.

We interviewed 22 CEOs and high-level executives between February and August 2017 who had participated in the Sydney sleepouts over the years. Some were first-timers, while others had been participating since the event started in Western Sydney in 2006. 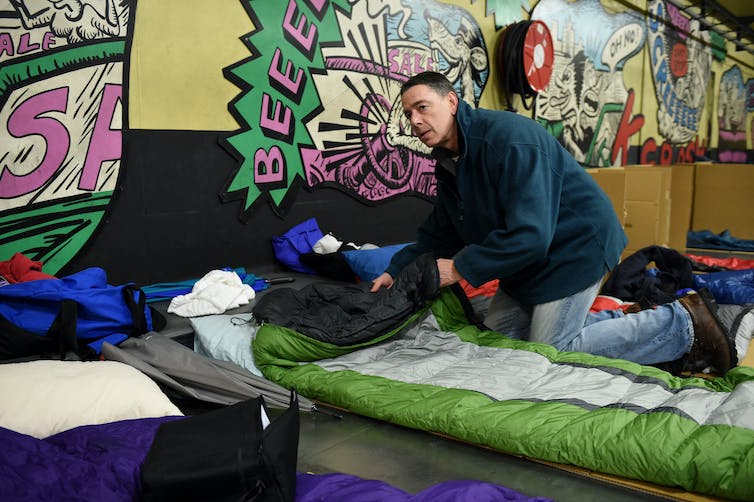 CEOs can experience a reality check having to sleep outside in the cold. Dan Himbrechts/AAP Image

Previous studies have shown that an act of compassion requires the individual performing the act to first understand then empathise with the plight of another. Many of the participants we spoke to had experienced this understanding.

One CEO talked of what he’d learnt from the personal stories of speakers at the sleepout:

Knowledge – the facts, the figures and the realisation that they’re just normal human beings, who’ve had the misfortune of losing a job, whole family disintegrates, mental illness as well. That changed me personally.

For other CEOs, the experience of sleeping rough for a night, in the middle of winter, is a reality check, which increased their empathy:

One year it rained, and I woke up and literally had to peel the cardboard off my face. I thought – that’s what it’d be like every night. Freezing, raining. And not feeling safe. If I had to do this day in, day out – how on earth could I get myself out of this downward spiral?

Read more: What’s in the name 'homeless'? How people see themselves and the labels we apply matter

All of the CEOs we interviewed had taken steps to effect change, to varying degrees. Some did it at home – such as by getting their family together to volunteer on food vans that feed homeless people or reaching out to a friend with depression. Another reported talking to homeless people when previously they would have just walked past.

Other acts were on a larger scale. Around a third of those we interviewed made changes in their organisation. Moir Group director Stephen Moir restructured his company’s charitable commitments to help the homeless find jobs:

We’re a recruitment company, and we give our time and experience to help them (homeless men and women) find work. Everybody in our business contributes. At workshops, at the shelter. It’s not forced. It’s embedded in our organisation. And we’ve helped more than 30 homeless people find a job.

It’s changed how I talk to employees, in disciplinary committees and the like. Whatever support our staff need, we give it to them.

After the sleepout, we added an employee support program. Any employee can call this anonymous hotline and get free support – marital stress, mental stress, health disorders. We pay for it.

Since the event began, thousands of CEOs have taken part, so 22 research participants may seem a small sample size. But the appropriate sample size in qualitative research is far lower than survey research. The number of in-depth interviews we conducted is considered adequate to gain an understanding of the theme explored.

Read more: FactCheck Q&A: do 'about 30% of homeless people have a job'?

For the 2018 CEO Sleepout, 1,500 CEOs and business leaders will sleep out across the country to raise funds for Vinnies’ homelessness services. So far, this year’s event has raised close to A$4.3 million.

Research indicates CEOs are in a strong position to influence the social responsibility programs of an organisation. And it seems some charity events can drive CEOs to make changes.