In Australia 12-14% of pregnancies are affected by gestational diabetes. Despite its prevalence, most people aren’t aware the risks don’t end when the pregnancy does.

Diabetes occurs when the level of glucose (sugar) in the blood is higher than normal. Cells in the pancreas control blood glucose levels by producing insulin. When these cells are destroyed, type 1 diabetes results. When the body becomes resistant to the action of insulin and not enough insulin can be made, this is known as type 2 diabetes.

Gestational diabetes occurs when high blood glucose levels are detected for the first time during pregnancy. Infrequently, this is due to previously undiagnosed diabetes. More commonly, the diabetes is only related to pregnancy. Pregnancy hormones reduce insulin action and increase insulin demand, in a similar way to type 2 diabetes, but usually after the baby is born, hormones and blood glucose levels go back to normal.

Read more: Weight gain during pregnancy: how much is too much?

Who gets gestational diabetes?

Factors that increase the risk of gestational diabetes include:

Weight is the major risk factor that can be changed. But in some cases, gestational diabetes may develop without any of these risk factors.

Rates of gestational diabetes in Australia have approximately doubled in the last decade. Increased testing for gestational diabetes, changing population characteristics, and higher rates of overweight and obesity may have contributed to this. There are likely to be other factors we do not fully understand. 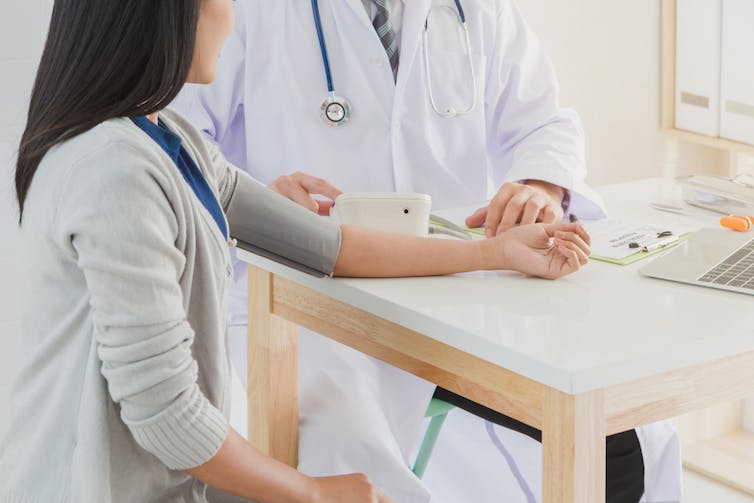 All women with a history of gestational diabetes should have a yearly medical check-up. from www.shutterstock.com

If gestational diabetes is not well managed, there’s greater risk of complications during pregnancy and childbirth for both mother and baby, including high blood pressure, premature birth, having a large baby, or needing a caesarean section. With good pregnancy care, healthy eating, physical activity and the use of medications such as insulin or metformin (which controls high blood pressure) where needed, many of these problems can be avoided.

A blood test six to twelve weeks after childbirth can confirm if the diabetes has gone away. After this it can be tempting to forget about the gestational diabetes altogether. Unfortunately, however, we know this is not necessarily the end of the diabetes journey.

In recent years, we’ve realised women with gestational diabetes have a higher risk of developing health problems later in life. Pregnancy is a special kind of “metabolic test”. It unmasks potential problems of resistance to insulin action, or inadequate insulin production which were hidden before pregnancy.

Compared to women without gestational diabetes, the risk of developing high blood pressure and heart disease is nearly tripled.

Research also suggests children of gestational diabetes pregnancies have higher risk of being overweight and having diabetes as they grow up. In some studies, diabetes was increased up to four times. As more women are having gestational diabetes, this could be one contributor to escalating rates of diabetes and obesity, especially in young people.

Guidelines suggest testing for diabetes every one to three years, depending on risk. Knowing a woman’s diabetes status before her next pregnancy is important.

We need to better understand who is at highest risk and research which interventions will reduce that risk. In the meantime, those in health care should recommend lifestyle changes that reduce body fat, such as healthy eating and physical activity. These changes can be adopted by the whole family.

Women should aim to lose the excess weight gained during pregnancy and be within or closer to their healthy weight range. Breastfeeding is beneficial for preventing weight gain and potentially even diabetes.

Gestational diabetes is a window into the future health of women and their children. With appropriate education, support, monitoring and preventative action, this glimpse into the future allows us to change our destiny.