Farmers, landowners and conservationists across Australia are benefiting from an unexpected, combined effect of two biological controls that target feral populations of European rabbits (Oryctolagus cuniculus), according to our research, published in the Journal of Applied Ecology.

Pest rabbits cost the Australian economy over A$200 million each year in lost production, and millions more in pest control. They compete with livestock for food and cause enormous environmental damage.

Rabbits previously reached plague numbers in much of agricultural and outback Australia, until the introduction of two rabbit-specific viruses and insect vectors.

Then, in 1995, rabbit haemorrhagic disease virus (RHDV) escaped from quarantine, before an official release in 1996. These biocontrols have reduced rabbit numbers by an estimated 75-80% (see references in our paper) in South Australia alone since the 1950s. 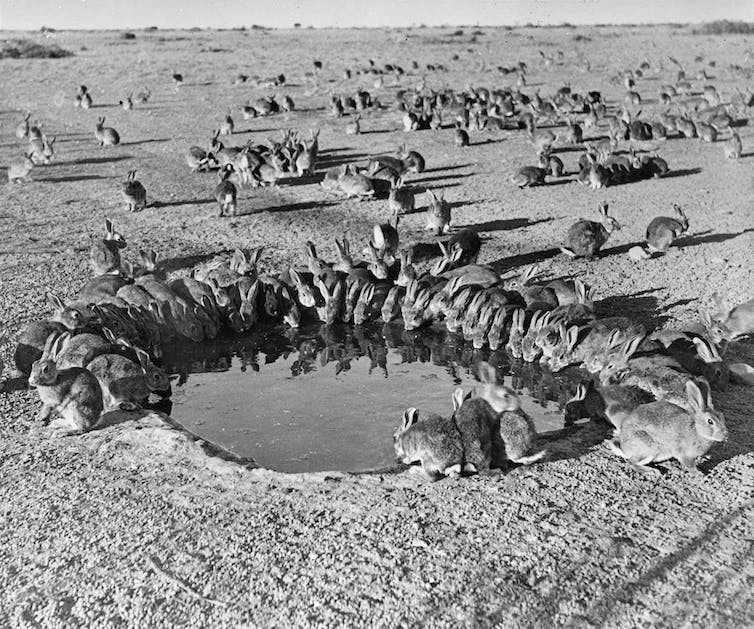 Rabbits around a waterhole at the myxomatosis trial enclosure on Wardang Island in 1938. National Archives of Australia/Wikimedia Commons

Together, myxoma virus and RHDV saved the Australian economy an estimated A$70 billion by 2011.

This is why our new discovery of a positive interaction between the two main viruses is great news for the Australian environment and economy.

Our study represents the first solid evidence that a combination of these two rabbit diseases is more effective in reducing rabbits’ abundance, providing agencies and landowners with more bang for their buck during rabbit control programs.

Our findings were made possible by one of the longest-running monitoring programs in disease ecology: the 21-year (and ongoing) Turretfield Rabbit Research Project north of Adelaide.

Roughly every two months for more than two decades, PIRSA Biosecurity South Australia has counted, tagged, virus-tested, and released rabbits of all ages from the isolated sentinel rabbit population.

Analysing this unrivalled dataset, we discovered that the probability of dying from rabbit haemorrhagic disease was 10% higher than expected when an individual rabbit had previously been exposed to myxoma virus. These means that rabbits that are now immune to the myxoma virus (Australia’s first rabbit biocontrol) are nevertheless more susceptible to RHDV (Australia’s second rabbit biocontrol).

In other words, the two diseases (a poxvirus and a calicivirus) interacted to give a population-level effect that resulted in more rabbit deaths overall.

Such an interaction between biocontrol agents is rare; in fact, it is the first discovery of its kind in the world. 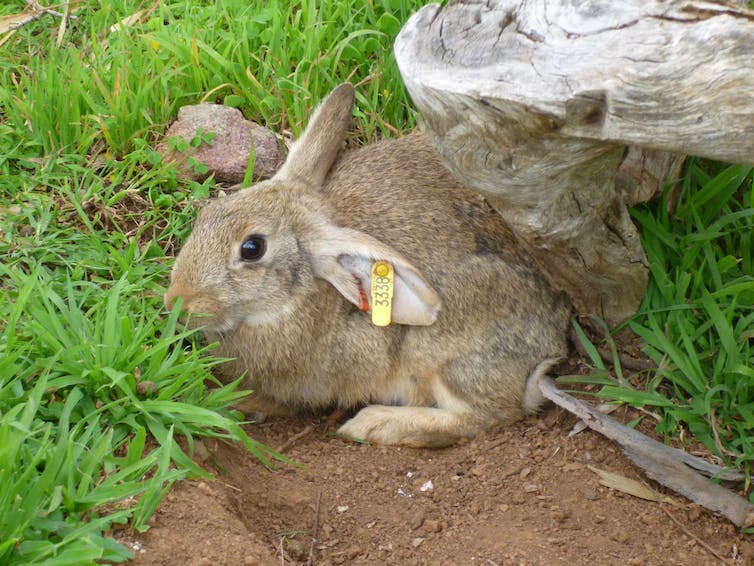 Tagged rabbit from Turretfield (photo taken September 8, 2014). This individual had no antibodies against RHDV or myxoma virus, but was found dead from haemorrhagic disease two hours later. David Peacock/Biosecurity SA

The knowledge that the two viruses combine as a potent weapon against rabbits has major implications for land owners and farmers around the world who battle pest rabbits. Disease outbreaks could potentially be timed to ensure that the death rate of pest rabbits is as high as possible.

In Australia, rabbits are a dietary mainstay for two other damaging invasive species: feral cats and red foxes. A large rabbit population can keep the two predator species at high densities, thus promoting their high predation rates on native wildlife.

Read more: Invasive predators are eating the world's animals to extinction – and the worst is close to home

Keeping rabbit numbers low can therefore benefit our environment. In fact, the rate of native vegetation cover has increased since RHDV began to spread in 1995, and there have been documented increases in the numbers of small native mammal species since that time.

Our discovery also has implications right across the world. European rabbits cause environmental and agricultural damage in places as diverse as the United Kingdom, New Zealand, and in parts of South America.

Our findings will also help researchers and conservationists to safeguard the rabbit in its natural range in Europe, and support Australia’s search for other biocontrols in the future.