From July 1st 2018, every state and territory of Australia (excluding the Northern Territory) will have laws making microchipping cats and dogs compulsory.

South Australia is the latest state to make microchipping mandatory, part of a series of reforms aimed at increasing responsible pet ownership.

Microchipping – and appropriate use of associated databases – can help you keep track of your pets, and aid governments in tracking down unethical animal breeding practices. But data must be kept up to date.

A microchip is only as good as the information it unlocks. If you move, change your phone number or transfer ownership of your pet, update your pet’s microchip registry details. A lost animal with out-of-date microchip details is no more identifiable than a stray animal with no ID.

Read more: Four ways having a pet increases your lifespan

After watching this, make sure to check your pet’s microchip details are up to date.

Smaller than a rice grain 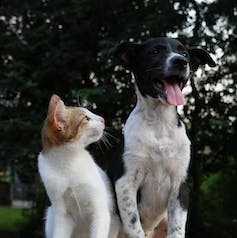 Could you stop panting, please? Anusha Barwa on Unsplash, CC BY

A pet microchip is an implant smaller than a grain of rice, inserted under the skin of an animal. It is inactive until a microchip scanner is passed over the microchip, completing an electric circuit and allowing a message to be passed to the scanner. The message is a unique number which allows permanent identification of the animal.

Microchips are implanted by an authorised implanter, though the definition of “authorised” varies across each state and territory.

Generally, implanters have to complete an approved course and include veterinarians, veterinary nurses and council officers. Once authorised, the implanter will be given a licensing number to allow completion of paperwork and grant access to databases containing owner information.

Microchipping of pets is an important part of being a responsible owner. It indicates ownership, allowing lost, stray or stolen pets to be reunited with their owners.

Read more: As selling pets online becomes normal, we need to regulate it

In an ideal world, all lost dogs and cats would be reunited with their owners through their microchip. However, while the microchips are relatively simple, the databases used to maintain the records of the microchipped animals are more complicated. 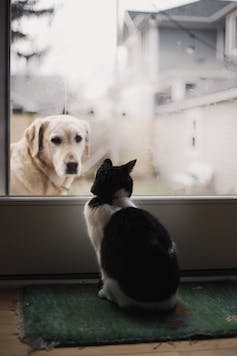 It’s nice inside the house. Alexis Chloe on Unsplash, CC BY

There are currently eight databases in Australia, with six privately owned and two state government owned.

The privately owned databases have developed a website called Pet Address, which allows someone to look up a pet’s microchip number and be directed to the database which owns the information.

However, the two state government registries are not part of this website. This means that approved implanters still have to search across multiple databases for your pet’s details, increasing the risk for human error.

It can also lead to situations where animals that are microchipped are unable to be identified. For example, if a dog was microchipped in NSW, but then moves to QLD, vets in QLD would be unable to access the client’s details as only NSW authorised implanters can access this data.

Read more: Seven ways to protect your pets in an emergency

New system for dogs and cats

The system being set up by the South Australian government, called Dogs and Cats Online [DACO] will include dog and cat microchip numbers. It also combines the dog registers of 69 councils as well as the new SA dog and cat breeder register and existing databases on accredited assistance dogs and dog attacks.

One advantage of DACO is entering and changing details will be free for pet owners. Changing details on the private systems may involve a fee, which can mean owners are less likely to update them. 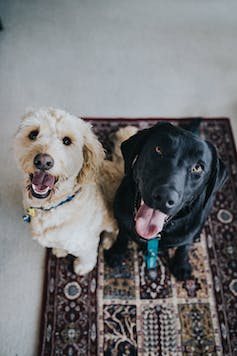 We love you. And your treats. Jay Wennington on Unsplash, CC BY

In developing its new DACO system, the SA Dog and Cat Management Board has worked through the access that each user will require. While it is an advantage to quickly be able to identify a dog or cat when they are lost, there are also privacy issues with unlimited access to the database.

Many vets and shelters have suggested DACO be integrated with the other six microchip databases in Pet Address. However, this also has privacy implications.

Should a council or shelter in Victoria have access to the personal information of pets owners in SA? Can the two systems be synchronised in a limited way, so that a search on one system will only let the searcher know which database the information is stored on?

Read more: Cat plague is back after nearly 40 years in hiding – here's what you need to know

Some state governments are using microchips beyond their original intended purpose. For example, in Queensland all dogs born after May 2017 are now required to have a Supply Number attached to their microchip number. When an approved implanter fills out the microchipping paperwork of a dog in Queensland, the Supply Number is also included, linking the animal to its former owner (breeder) and current owner. This will allow tracking of unethical breeding practices.

Compliance with microchipping laws, even in states which have had them for many years, can be poor. For example, the ACT has had compulsory microchipping for all dogs and cats by 12 weeks of age since 2001. Despite this, data presented at a recent conference indicated only 68% of adult dogs and 23% of adult cats entered the RSPCA ACT shelter microchipped.

Read more: Curious Kids: How can you tell if your cat is happy and likes you?

All of the concerns around databases and privacy with microchips are heavily outweighed by the benefits to pets and their owners. Pets that are microchipped with up to date contact details are far more likely to be reunited with their owners, as shown by a Queensland study.

After you’ve finished reading this, take the time to look up your pet’s microchip details and ensure they are up to date. You might just save your pet’s life.