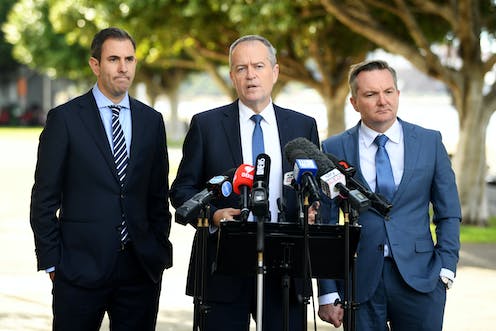 Opposition leader Bill Shorten has backed down on his controversial declaration on Labor’s company tax policy, announcing a compromise that would allow firms with turnovers under $50 million to keep the tax cut that will be in place at the election.

This would be a 27.5% rate. But companies would not get the rest of the already legislated cut, which eventually takes their tax down to 25% by 2026-27.

The compromise follows a fierce backlash from business and an outcry from some of Shorten’s senior colleagues, after he declared an ALP government would repeal tax cuts for firms with turnovers between $10 million and $50 million.

While that position had support in the opposition’s expenditure review committee, it had not been taken to shadow cabinet.

The shadow cabinet endorsed the new position on Friday morning.

Shorten told a news conference that it had become clear in consultations with business and colleagues “that any proposition to change already implemented tax rates … was creating great uncertainty.”

“I have listened to all of the debate, spoken to colleagues, spoken to business. I now accept that simply stopping at $10 million would have created more confusion and uncertainty and it was not the main game,” he said.

Asked whether he had got things wrong, Shorten said: “You can play all the word games you want, but let me be very, very clear. We have changed our position, we have amended our position because politicians who do not listen, politicians who just simply want to stick on one course of action regardless of all the facts, I do not think that helps anyone.”

Shorten said that as well, on the latest figures from the Parliamentary Budget Office (PBO), “we have also found that the cost of this amendment on company tax cuts is not as great as we thought.”

Shadow treasurer Chris Bowen told the news conference that the position Shorten put on Tuesday reflected what Labor’s expenditure review committee thought at that time could be afforded - before the updated PBO figures.

Compared with the government’s legislated cuts, the Labor position saves $2 billion over the forward estimates and $62 billion over a decade.

An ALP government would have to get its repeal legislation through the Senate, which could be a challenge.

Labor had “failed to properly listen to the business community’s call to reverse its announcement earlier this week to repeal the tax cuts for business with a turnover of under $50 million. Freezing the threshold at 27.5% for those businesses is actually a tax increase on the 25% rate that has been passed by the parliament”.

The Australian Industry Group welcomed the Labor change but said it regretted Labor remained uncommitted to taking the rate to 25%.

The group’s chief executive Innes Willox said: “We look forward to further discussions with the opposition on tax policy with the aim of a bipartisan commitment to lowering Australia’s corporate tax rate for all businesses to a more internationally competitive rate of 25 per cent over the medium term.”

Treasurer Scott Morrison said Shorten “has shown a complete lack of sensitivity to what our economy requires to ensure that people have their jobs and their wages and can plan for their future with confidence.”