For most women in Australia, the decision about whether or not to have a baby is a profoundly personal one. But for some, control over this decision is taken away from them, usually by an abusive male partner. This can happen via the use of verbal pressure, threats, blackmail, physical violence or rape.

Despite this, it mostly remains a hidden issue. We don’t know how common it is, and it’s very likely (as with most forms of violence against women) it’s grossly under-reported. The US National Intimate Partner and Sexual Violence Survey suggested around 8% of respondents had experienced reproductive coercion in their lifetimes, although the survey only asked about a limited range of behaviours.

In Australia, we don’t have any reliable prevalence data. But Queensland organisation Children By Choice reported they’re seeing it in around one in seven women presenting for abortions.

Read more: FactCheck: is domestic violence the leading preventable cause of death and illness for women aged 18 to 44?

What is reproductive coercion?

Studies consistently show a relationship between intimate partner violence, which affects around one in four Australian women, and unintended pregnancy.

But whether this is through the male partner intentionally trying to get his partner pregnant, or simply a side effect of the woman having little control over the timing and frequency of sex, is unclear.

Many women in violent relationships are unable to negotiate the use of contraception, particularly if relying on methods such as condoms that depend on the male partner. Others are too fearful to refuse sex, even if they know they’re risking a pregnancy. Some women are raped by their partners.

Both women in violent relationships, and women whose partners force or coerce them into becoming pregnant have little control over their own bodies. It’s important to distinguish between deliberate behaviours intended to get a woman pregnant, and sexually coercive behaviours in relationships that may result in an unintended pregnancy.

As so little research has been done in this area, we don’t really understand how the experience of having an unintended pregnancy after being sexually assaulted differs from being deliberately forced to become or stay pregnant.

We don’t know whether experiencing a miscarriage as a result of physical violence is similar to being forced to have an abortion. More research is urgently needed in this area so we can understand women’s experiences and how best to support them. 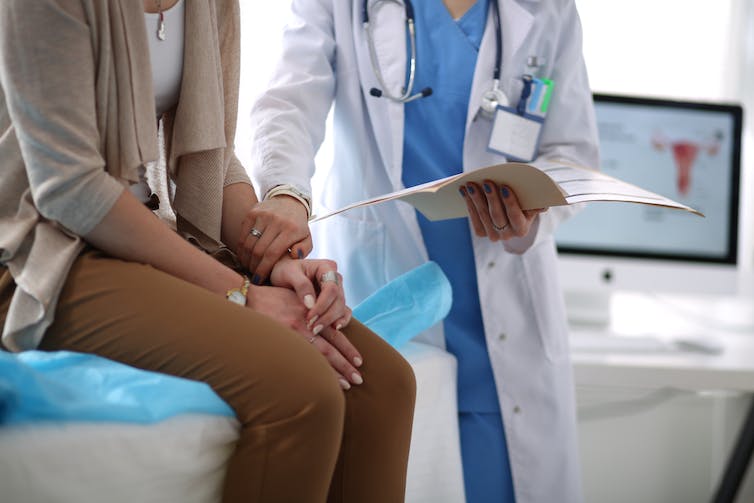 Not all health care workers know what signs to look out for. from www.shutterstock.com

But little is known about how practitioners working in these settings identify it in their patients, or how they respond if women disclose. In Australia, we don’t yet have best practice guidelines about how health practitioners should identify and respond to reproductive coercion.

The American College of Obstetricians and Gynaecologists recommends practitioners ask every female patient about reproductive coercion. But we currently lack evidence to support this approach.

This does not mean it’s wrong, rather there isn’t enough research to support “universal screening” as opposed to “case finding”, where practitioners enquire only after warning signs are detected or coercion is suspected.

Read more: Why are rates of domestic violence in Australia still so high?

How can we prevent it?

It’s clear more community awareness is needed about reproductive coercion. Health practitioners can help women experiencing reproductive coercion by prescribing female-controlled or hidden methods of contraception (such as an implantable intrauterine device with a shorter string that is undetectable by a partner).

They can also provide women with information about their reproductive rights, alert them to the abuse happening in their relationship, and provide referrals if appropriate. Safe, low-cost and reliable access to abortion and other reproductive health services are also critical.

But none of these solutions is a silver bullet. Like many forms of violence against women, the real road to prevention is broader social change towards gender equality. Specifically, a shift away from a culture of male entitlement to women’s bodies and towards real recognition of women’s reproductive rights.