To hear William Faulkner tell it, to write As I Lay Dying he “took this family and subjected them to the two greatest catastrophes which man can suffer – flood and fire, that’s all”. That’s all. And yet his 1930 tour de force, which he began the day after Wall Street crashed on October 24 1929, remains one of the most perplexing novels of the modernist canon. 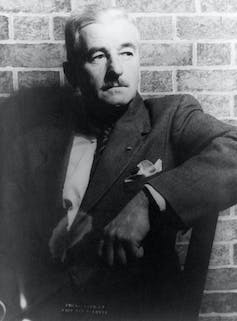 William Faulkner set most of his novels in fictional Yoknapatawpha County, based on his home, Lafayette County, Mississippi. Wikimedia Commons

As I Lay Dying is the third novel Faulkner set in his imagined Yoknapatawpha County, which is based on north-eastern Mississippi, where he spent most of his life. To some extent, the novel’s raw story is indeed simple. It narrates the cursed 10-day journey of the poor white Bundren family from their hill-country farm to the county seat of Jefferson to bury Addie, their wife and mother, in accordance with her wishes.

The novel is pervaded by the sweat, hunger and poverty that characterised the Depression-era South – and indeed much of the nation at this time. It also conjures the dialect, customs, characters and landscape of rural Mississippi as it deploys the region’s vernacular narrative forms such as the tall tale. We know, for instance, that Faulkner read and loved George Washington Harris’s 1867 collection of humorous tales concerning Sut Lovingood, that dialect-speaking “nat'ral born durn’d fool” whose influence we can trace forward to Anse, the Bundren patriarch.

Read more: Guide to the classics: Don Quixote, the world's first novel – and one of the best 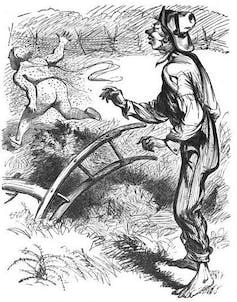 The influence of George Washington Harris’s most famous caricature, Appalachian farmer Sut Lovingood, is evident in the character of Anse Bundren in As I Lay Dying. Justin Howard via Wikimedia Commons

When Cash, the oldest of the five Bundren children, breaks his leg in the disastrous river crossing, Anse decides to pour concrete over the damaged leg to form a cast. “Why didn’t Anse carry you to the nearest saw mill and stick your leg in the saw?” the local doctor asks Cash in stunned amazement. “That would have cured it. Then you could have stuck his head into the saw and cured a whole family.”

Perhaps the most remarkable feature of As I Lay Dying – and this is a feature that has caught the attention of so many readers and critics – is the frequent mismatch between character and speech. That is to say, the language – the diction, syntax and register – of the monologues is often incommensurate with the character who is doing the speaking or thinking.

Take, for example, eight-year-old Vardaman’s first monologue, in which he describes his brother Jewel’s horse:

It is as though the dark were resolving him out of his integrity, into an unrelated scattering of components – snuffings and stampings; smells of cooling flesh and ammoniac hair; an illusion of a co-ordinated whole of splotched hide and strong bones within which, detached and secret and familiar, an is different from my is. I see him dissolve – legs, a rolling eye, a gaudy splotching like cold flames and float upon the dark in fading solution; all one yet neither; all either yet none.

These are surely not the words and thoughts of an uneducated farm boy. What is Faulkner up to here? Early critics faulted him for this apparent rupture in voice and character. They simply could not abide that his poor whites did not sound like poor whites. Had he, they wondered, simply made a mistake?

I would suggest that it is this very problem of narrative, language and representation – how to represent the interior life of someone like Vardaman? – that Faulkner is interested in, not only in As I Lay Dying but in so much of his fiction.

As the scholar Dorothy Hale has argued, Faulkner endeavoured to find ways to represent the private self – that is, a self radically removed from a public self bound by convention and common sense. So, because in Faulkner’s universe the deeply private self looks and sounds radically different from the public self, Vardaman can then talk or think about “the dark … resolving him out of his integrity, into an unrelated scattering of components” – this is how his deeply private self just might style it.

The family finally reaches Jefferson towards the end of the novel, ostensibly to bury Addie but in reality – or additionally – to fulfil their respective desires: for Anse, the procurement of a new set of teeth; for Addie and Anse’s daughter, Dewey Dell, an abortion; for the youngest child, Vardaman, a toy train.

It is at this point that modernity irrupts into the story. There in Jefferson the family encounters advertising billboards, telephone lines, a courthouse clock, automobiles, a graphophone (precursor to the record player), a train, electric lights, drugstores and imported bananas. While the Bundrens negotiate their “little postage stamp of native soil”, as Faulkner once described Yoknapatawpha, “with a motion so soporific, so dreamlike as to be uninferant of progress”, the world they now experience is characterised by speed. 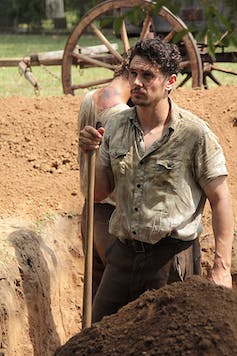 The troubled Darl is portrayed by James Franco in his 2013 film adaptation of the notoriously ‘unfilmable’ novel. Alissa Whelan/RabbitBandini Productions

Indeed, there was nothing faster than electricity or the transactions that the telephone now enabled. Medical practitioners came to blame the accelerated motion of modern life for the reported increase in nervous illnesses, something that may well account for the breakdown of Darl Bundren – the second of the five children – at the end of the novel.

Darl, the wretched victim of modernity, is unable to seclude from the public domain his deepest, most private self, something signalled by the increased fragmentation of his monologues over the course of the novel. And so the family has him committed to an asylum in Jackson. Intriguingly, we read right near the end of the novel, “Darl had a little spy-glass he got in France at the war.” Are Darl’s symptoms perhaps those of the returned WWI soldier, what we would today call post-traumatic stress disorder?

Like Darl, the narrative also breaks down. Indeed, Darl’s trauma seems embodied in the very manner of the novel’s fractured, fragmented telling.

To begin with, As I Lay Dying is collaboratively narrated – by no less than 15 different narrators – across no less than 59 interior monologues. Events are also narrated out of order. Addie’s sole monologue, which appears about halfway through the narrative, actually occurs after her death, and so she would seem to speak from the afterlife. And Darl sometimes tells of events that have not yet occurred or that he cannot possibly know about – for example, his narration of Addie’s death.

What is particularly breathtaking about Faulkner’s novel is the way it fuses – somehow – regional forms (such as the tall tale) and at times really quite startling techniques we might more readily associate with an experimental modernism.

And it does so as it narrates the anguished emergence of a family of poor whites into a thoroughly modern nation, described most hauntingly through Darl’s fate:

Our brother Darl in a cage in Jackson where, his grimed hands lying light in the quiet interstices, looking out he foams.