New housing supply is simply not expanding affordable housing opportunities for the poor in a way that reduces the homelessness count. We argue that this is due to certain barriers that prevent new supply from filtering down to low-income groups.

Politicians and economists often claim a housing supply crisis is to blame for the lack of affordable housing in Australia. They say increases in housing stock are failing to keep pace with population growth.

In a 2017 address to the Australian Housing and Urban Research Institute, Treasurer Scott Morrison said:

… for certain Australian households, housing affordability is an issue regardless of where they live due to economic reasons … However, in Sydney and Melbourne where supply has failed to keep pace with rising demand, the problem is far more acute… The principal cause of declining housing affordability is the failure of housing supply to adjust to increased demand…

Yet housing approval data from the Australian Bureau of Statics show the growth in housing stock has actually outpaced rates of population increase in all Australian capital cities.

Between 2005-06 and 2014-15, housing stock has expanded by over 22% while population growth has lagged behind at 19%. Despite this, median residential property prices nearly doubled in the same period.

How it should work in theory

Increasing housing stock only works to make housing more affordable if certain filtering processes occur. This is how it looks if the number of new homes increases while the number of households stays fixed or increases at a slower pace.

Read more: Australia's almost a world leader in home building, so that isn't a fix for affordability

Eventually, affordable housing opportunities would trickle down to the homeless, and the homelessness count would decline. But, in Australia, homelessness is on the rise. Back in 2006, fewer than 90,000 people were homeless. Within a decade, that number has climbed by nearly one-third, to more than 116,000 people – a 10% increase. 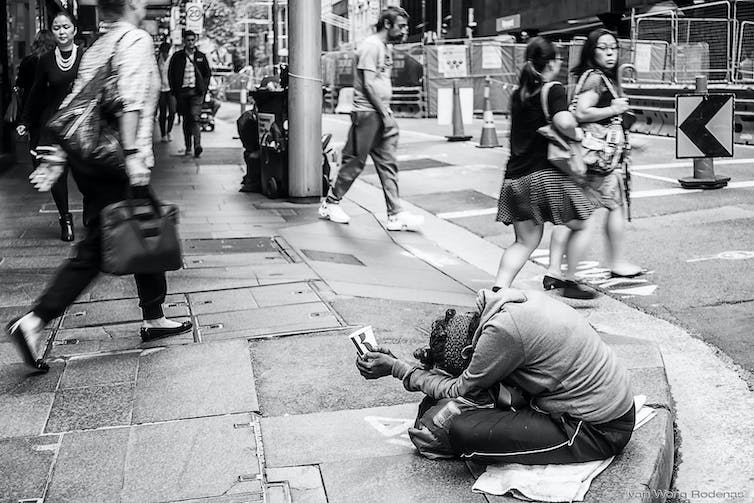 The number of homeless people in NSW has increased more than any other state. Ivan Wong Rodenas/Flickr, CC BY

New South Wales has fared the worst. The number of homeless people in NSW has soared by 70% between 2006 and 2016. With the exception of the Northern Territory, all other states and territories witnessed an increase in homelessness in this period.

So, despite the rise in housing stock, most states and territories have failed to contain, never mind reverse, the rise in homelessness over the last decade. Why are the filtering processes not working?

Deregulation of Australian financial markets and tax concessions have combined to make residential property an attractive investment, especially for higher-income households. So a higher-income earner would gain an additional property rather than swapping one for the other and leaving the vacated one affordable for the next in line.

And if a substantial share of new housing is being purchased as holiday homes or investments, this can stifle the trickle down of affordable housing opportunities.

Read more: Housing affordability stress affects one in nine households, but which ones are really struggling?

While migration is included in overall population numbers, in this case, the houses migrants are vacating to move to Australia remain in their home country. So this doesn’t contribute to the filtering process.

Finally, land and building regulations can play a role. Elderly people who may wish to downsize from a family home to an apartment usually want to live in the same neighbourhood. Yet planning interventions may prevent the construction of units in the suburbs downsizers would prefer.

Until these barriers are lowered, simply increasing new housing supply cannot be the silver bullet that fixes homelessness and the housing affordability concerns of the Australian population.