Plastic pollution has the potential to cause the worst damage to seabirds in the seas around Aotearoa New Zealand, where many of them come to feed and breed.

Aotearoa boasts the greatest diversity of seabirds in the world. Of the 360 global seabird species, 86 breed here and 37 are endemic, which means they breed nowhere else.

Some 90% of New Zealand’s seabirds are threatened with extinction. They (and many other marine species) are under pressure from pollution, climate change, and overexploitation of marine resources. Plastic pollution could be the final nail in the coffin for many seabirds that are already struggling for survival.

Read more: An international plastics treaty could avert a 'Silent Spring' for our seas

Plastic – not so fantastic

Every week, another grotesque story illustrates the impact of plastic in the environment. A whale was recently found with 80 plastic bags in its stomach – it died, of course.

One-third of marine turtles have died or become ill due to plastic ingestion in Aotearoa New Zealand.

A 2015 study suggested that 99% of seabirds would be ingesting plastic by 2050. The authors also predicted that seabirds in our backyard, the Tasman Sea (Te Tai o Rēhua) would be the hardest hit, because of the high densities of seabirds foraging in the region, and the overlap with plastic. This not that surprising, given that the earliest observations of Aotearoa’s seabirds ingesting plastic go back to 1958. 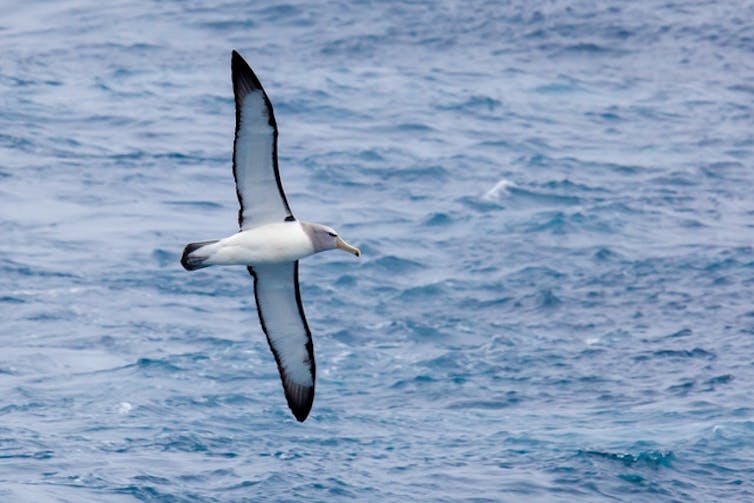 The Chatham Island albatross feeds in the Southern Ocean and breeds only on The Pyramid, a large rock stack in the Chatham Islands, New Zealand. Stephanie Borrelle, CC BY-SA

Seabirds are particularly vulnerable to ingesting plastics because most species feed at or near the ocean surface. They forage along eddies and oceanic convergence zones – the same areas where marine plastics accumulate. The impacts of plastic on seabirds and other marine wildlife include death by entanglement. Ingested plastic can inhibit a bird’s feeding capacity, leading to starvation or internal ulcers, and eventually death.

Flesh-footed shearwater populations in Aotearoa may have declined up to 50% to around 12,000 pairs since the 1980s, and have gone extinct at some of their Hauraki Gulf breeding sites. These declines continue in spite of predator eradication and an end to harvesting on many of the islands where they breed.

In Australia, up to 100% of flesh-footed shearwater fledglings contained plastic, the highest reported for any marine vertebrate. Fledglings with high levels of ingested plastic exhibited reduced body condition and increased contaminant loads.

The chemical structure of plastics means that they act as toxin sponges, attracting harmful contaminants from the surrounding seawater, including persistent organic pollutants and heavy metals. When an animal ingests plastic, there is the potential for those toxic chemicals to leach into its tissues.

Chemicals such as PCBs and flame retardants that are added to plastics during manufacture have been found in seabird tissue around the Pacific. High concentrations of toxic chemicals can retard growth, reduce reproductive fitness and, ultimately, kill.

Sooty shearwater (tītī) chicks, which are harvested and consumed by Māori in Aotearoa, have a high potential for ingesting plastic, given evidence of plastic ingestion in shearwaters from Australia and anecdotal evidence from harvesters on Stewart Island (Rakiura). The closely related short-tailed shearwater, which breeds in Australia, has also been show to consume plastic. In one study, 96% of chicks contained plastics in their stomachs and chemical loads in their tissue.

Few, if any, studies have specifically looked at contaminant loads derived from plastics in any species of seabird in Aotearoa. However, Elizabeth Bell from Wildlife Management International is now collecting samples of preen glands, fat and liver tissue for analysis of toxic chemicals in bycatch birds found with plastic inside them. This research is crucial to understanding the implications of the transfer of toxins to people from harvested species that ingest plastic.

Seabirds are the sentinels of ocean health. They tell us what we can’t always see about the health of the oceans and its resources that we rely on.

Plastics are sold to us on the perceived benefits of strength, durability and inexpensive production. These qualities are now choking our oceans.

In a few decades, we have produced an estimated 8.3 billion tonnes. The expedited pace of production has not been met with adequate waste management and recycling capacity to deal with it all. As a result, an estimated 8 million tonnes of plastic pollute the environment each year.

Global production of plastics is doubling every 11 years. It is predicted to be an order of magnitude greater than current production levels by 2040. The time is ripe for the initiation of an international agreement to lessen plastic pollution in the world’s oceans and save our seabirds and marine wildlife.