Australian Ninja Warrior is a show that promises constant surprises. Perhaps the greatest surprise is not the extraordinary capacity of the human body to master a seemingly impossible obstacle course, but rather the belief held by the producers that the label “ninja” is the best term to describe the competitors.

Contestants in the TV show compete to finish a series of increasingly difficult physical tasks such as swinging across pools on suspended tyres or scaling the formidable Warped Wall. It is a test of grip strength and balance, not Japanese spycraft.

The ancient ninja was a covert operative who specialised in sabotage and assassination. He was a creature of the shadows and disguise, not a flood-lit arena of over-sized playground equipment. Muffled, he moved in silence. Anonymous, he never bothered to develop signature dance moves. It is hard to imagine a figure further removed from the ninja than the social media hit of this year’s series, Jacob Woodhouse, a contract administrator and model wearing nothing but solid-gold underwear.

The only competitor in this series who seems to have taken the “art of the ninja” seriously was an extremely earnest young man, Gabriel Iftene, who practised at home alone in the dark with a mask and flaming swords and declared that he “resonates strongly with the way of the Ninja and Samurai”. He fell at the first hurdle.

Originally produced in Japan under the title Sasuke, after the name of a popular warrior folk hero, the sports entertainment show was rebranded for its US audience as American Ninja Warrior. In promoting the figure of the ninja to sell this series, the show continued a long-standing US practice of borrowing the warrior traditions of other cultures as a way of embellishing sporting activities.

For example, in the US, sporting teams have frequently borrowed names and symbols from Native American culture. It is a move that has become increasingly contentious with many Indigenous activist groups regarding the practice as demeaning and trivialising of their customs and beliefs. So far, their complaints have achieved little success. While the Atlanta Braves baseball team did retire their mascots “Chief Noc-A-Homa” and “Princess Win-A-Lotta”, their continued use of the “tomahawk chop” to celebrate victory has infuriated many. The Washington Redskins have so far resisted all attempts to change their name.

Within Australia, the most obvious predecessor to Australian Ninja Warrior was the mid-90s TV show Gladiators. Here the Roman practice of executing criminals and prisoners of war in theatrical fights to the death was repackaged as a competition in which spandex-clad body-builders attempted to knock contestants off greased-slopes with padded sticks. It was silliness that Australia took terribly seriously. Overnight the “gladiators” became household names. And what names they were. A thesaurus of dangerous things - Blade, Cheeta, Hunter, Predator etc. No opening of a shopping mall was complete without them. All over Australia, viewers glanced across at their sedentary partners munching on Golden Gaytimes and dreamed of being lost in the magnificent chests of Hammer or Vulcan.

Credits for the 90s Gladiators.

Why do we continually look outside our own culture for sporting names? Evoking the ninja makes sense in Japan, but we have our own proud local warrior traditions. Just because a format has been borrowed doesn’t make the show’s title inevitable. Why wasn’t “Gladiators” called “Diggers”? Why doesn’t Channel 9 offer “Australian ANZAC warriors”? The moment that you contemplate these titles is the moment that you see the problem. Renaming our ninja warriors as “Anzacs” or “Diggers” threatens to expose how relatively trivial their achievements are. Claims about sportsmens’ bravery, endurance, courage, and tenacity tend to ring hollow when compared with that exhibited by those who fought at Gallipoli or Fromelles, or endured the hardships of the Kokoda track. The gap is too great. We can’t use our warrior tradition in sporting contexts because we care too deeply about it. 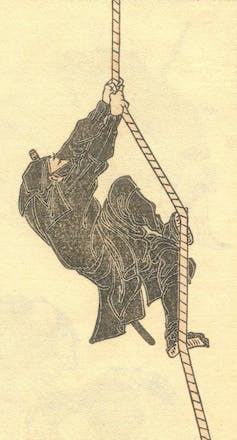 Drawing of the archetypical ninja from a series of sketches (Hokusai manga) by Hokusai. Woodblock print on paper. Volume six, 1817. Wikimedia

The ninja brand-name works especially well for exciting interest because it conforms to enduring Western fantasies about the East as a mysterious place where conflict played out according to different rules. Instead of straightforward honest chivalric combat, the East has traditionally been held to be a place where poison, secrecy, and assassination hold sway.

18th and 19th-century Europe thrilled itself with stories about a Middle-Eastern order of fanatical, drug-addicted, highly-trained killers led by a mysterious “Old Man of the Mountain” who dispatched his warriors to secretly dispose of his enemies. The name “assassin” comes from the Arabic name of this order.

In the 20th century, the increasing influence of Japanese popular culture, especially through martial-arts movies, meant that the West was looking further East for its cold, ruthless killers. Enter the ninja, a figure from feudal Japan who could be reimagined as an unstoppable silent executioner. By the time Australian Ninja Warrior picked up the ninja name, the ninja figure had already been debased through countless movies and comic books. After Teenage Mutant Ninja Turtles could anybody take the ninja seriously?

Apparently yes, according to the tremendous viewing figures that Australian Ninja Warrior attracts, although down from its record-breaking premiere season in 2017.

Perhaps the reason for the success of the name lies in the fact that we still lack the vocabulary to describe the new frontier of sport that this show represents. Ninja Warrior belongs to a category of sports such as CrossFit, Mixed Martial Arts, and Parkour where the focus is on the acquisition of measurable skills that achieve practical outcomes. 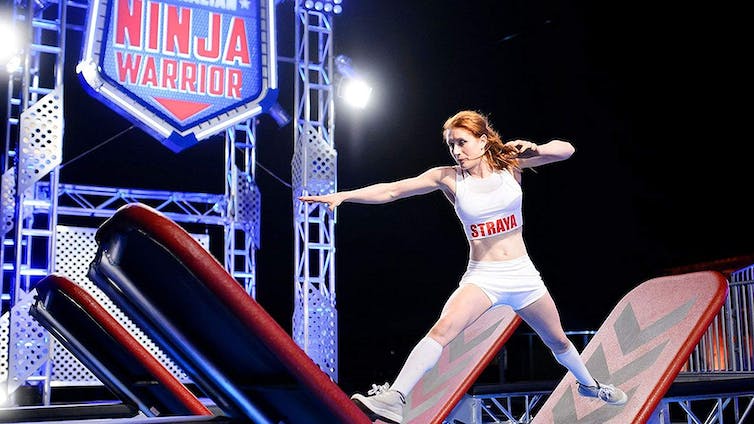 Heat 2 in the first season of Australian Ninja Warrior. IMDB

Calling these athletes ninjas suggests that there may be some practical purpose to being able to swing from a series of dangling rods or run across a pole comprised of spinning blades. We may not want to assassinate anybody ourselves, but it is comforting to know that we can equip our young people with the skills to do so.

The drive for instrumentalism, which has invaded so much of our culture, has not left sport unscathed. Watching host and former-cricketer Freddie Flintoff interview a competitor on Ninja Warrior is like watching a dinosaur interview an early mammal. Freddie and his sport, to judge by the decline in the importance of cricket outside of the subcontinent, faces certain extinction. The sheer beautiful uselessness of cricket has signed its death warrant. Style and grace have fallen completely out of fashion when describing sporting achievement.

The focus is now on “functional fitness”, developing muscle groups and perfecting movements that can assist you in the “real world”. I desperately hope that “functional fitness” will prove to be a mirage, a soon-to-be-forgotten fad, because if Australian Ninja Warrior represents the type of training I’m going to need to survive in the future, then god help me.