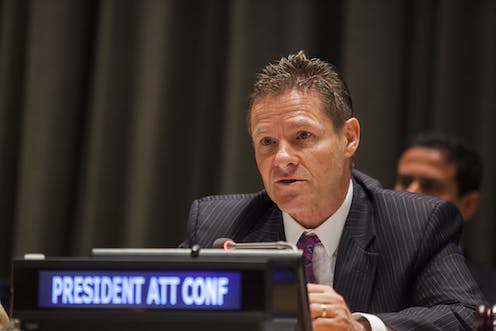 Malcolm Turnbull has appointed his chief of staff, Peter Woolcott, as the new Public Service Commissioner, following the resignation of the controversial John Lloyd from the position.

Woolcott is a public servant with a career in diplomacy. While in the Turnbull office he has been on leave from his position as a deputy secretary in the Department of Foreign Affairs.

Lloyd quit amid questions about his sharing information with the Institute of Public Affairs (IPA), for which he formerly worked. Labor accused him of being partisan, which he denied.

Earlier this month, the government appointed Phil Gaetjens, former chief of staff to Treasurer Scott Morrison, as the new head of Treasury. Labor has flagged it may sack him if it wins office, accusing Morrison of politicising Treasury during his time as treasurer. Woolcott’s appointment is not likely to be controversial.

Read more: View from The Hill: New Treasury secretary rolls the dice on his future

Woolcott served as High Commissioner to New Zealand in 2016-17, and before that was Ambassador for the Environment in 2014-16.

Previous positions included Permanent Representative to the United Nations in Geneva and Ambassador for Disarmament; Ambassador for People Smuggling Issues, and Ambassador to Italy. He was chief of staff to then foreign minister Alexander Downer in 2002-2004.

Diplomacy runs in the family - Woolcott is the son of a former distinguished Australian diplomat, Richard Woolcott, who headed the Foreign Affairs department.

Turnbull said the government had commissioned an independent review of the public service. Woolcott was well qualified to “help ensure the APS is fit for purpose,” Turnbull said.

“He will work closely with David Thodey on the review and with the Secretary of the Department of Prime Minister and Cabinet Dr Martin Parkinson to help drive reform.”

Clive Mathieson, a former editor of The Australian who has been deputy to Woolcott in the Turnbull office, will become the Prime Minister’s new chief of staff.

The Community and Public Sector Union welcomed the Woolcott appointment, saying it “offers a much needed break from the damaging ideological agenda of John Lloyd”.

CPSU National Secretary Nadine Flood said: “It’s unusual to have a career diplomat appointed as Public Service Commissioner, but Peter Woolcott is a welcome and plainly also a much needed change given his long history of working in the Australian public service.”