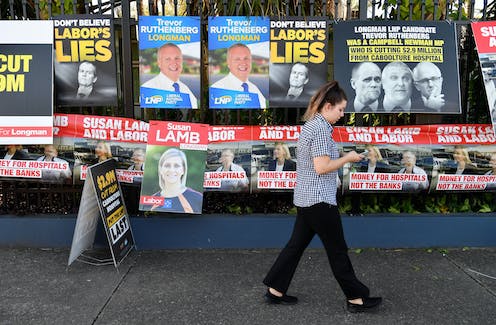 As expected, the Longman by-election was the contest to watch on “Super Saturday”. But, as it turned out, it was for reasons that weren’t all anticipated.

Observers had predicted a tight race in the marginally-held seat north of Brisbane, with high poll support for Pauline Hanson’s One Nation adding to the unpredictability. Yet, Labor’s Susan Lamb defied the naysayers and secured a reassuring swing, regaining the seat she’d vacated owing to her former dual citizenship status.

For opposition leader Bill Shorten, the weekend’s byelection results provide a confidence boost and should dampen the leadership speculation that has animated sections of the media.

For Prime Minister Malcolm Turnbull, however, the Longman result especially (and South Australia’s Mayo to a similar extent) will prompt soul-searching in Coalition ranks ahead of the next federal election.

The most notable – and underestimated – aspect of the vote count in Longman was the fall in support for the Coalition. This flew in the face of opinion polls leading up to the byelection date, which suggested there was little between the major candidates. Warnings from election analysts about the reliability of single-seat polling might be heeded more closely in future.

The Coalition’s primary vote in Longman plunged 9.4% from the 2016 federal election, resulting in a two-party-preferred swing of 3.7% against LNP candidate Trevor Ruthenberg. While senior Coalition MPs have since put this down to an “average” anti-government swing at byelections, few in the party would have expected such a kicking in a historically conservative seat.

Ruthenberg came under scrutiny during the by-election campaign for a wrongly claimed military service medal. He also carried some baggage as MP for a nearby state seat during the single-term government of Campbell Newman. Combined, this probably turned away a number of potential voters, and contributed in part to Lamb increasing her primary vote from 35.4% to almost 40%. Queensland’s LNP faces fresh questions about its organisational and campaigning stocks following a disappointing showing at last November’s state election.

The bigger concern for the federal government is the extent to which its policies are on the nose with voters. Certainly, Labor focused much of its Longman campaign on the effects that penalty rate reductions and company tax cuts for big businesses would have on local job prospects and funding for hospitals and education services. ALP insiders were quietly confident of crafting a successful “class warfare”-style campaign in an electorate with higher than average unemployment and below average incomes.

In this respect, the Longman campaign offered a preview to the likely dimensions and key party messaging of the coming federal election campaign, expected in the first half of next year. Given the number of marginal federal seats in Queensland, this positions the state as the “battleground” where that election can be won and lost.

The fight for marginal seats

Byelection results shouldn’t, of course, be extrapolated to likely voting patterns at a general election. Many in Queensland remember John Howard’s Liberals losing a 2001 byelection for the Brisbane seat of Ryan, only to regain it comfortably at the national election later that year (aided by some notable external factors).

The Longman contest was fought on local as much as broader issues – with residents’ health, education and employment concerns front of mind for most. But these “bread and butter” issues, as well as Longman’s characterisation as a true marginal, urban fringe seat, make the fall of the votes here possibly indicative of wider trends. If the government’s intended tax cut package for large as well as smaller businesses turned off many Longman voters, it may well do so in marginal seats across the board.

In Queensland, where there is nearly a dozen such marginal seats – seven held by the Coalition – any inkling as to what might motivate voters in those electorates will be keenly sought by the major parties. The Coalition, in particular, stands to lose much if lessons can’t be drawn from voters’ messages.

After the weekend, MPs in the neighbouring electorates of Petrie (margin of 1.6%) and high-profile Dickson (held by Peter Dutton on the same margin), as well as Flynn (1%), Forde (0.6%) and Capricornia (0.6%), will be sitting more nervously in the Coalition party room.

The issues animating many Longman voters also feature in seats alongside it. Anti-government sentiment could well seep across electorate boundaries and threaten incumbents there. Notably, Dutton’s late arrival on the Longman campaign trail warning of the immigration policy “perils” of Shorten’s Labor didn’t much seem to stem the flow of votes away from Ruthenberg.

With Labor also holding a handful of marginal Queensland seats, both major parties will be conscious of shoring up an unstable vote base. It is this landscape, as much as Labor’s campaign messages about “big end of town” tax cuts, that likely determines how much the government refashions its policy agenda ahead of the federal election.

One Nation vote hurts the Coalition

One Nation’s considerable vote in Longman – almost 16% compared to the 9.4% it gained in 2016 – underlines the current strength of the minor party protest vote. Indeed, the increase in One Nation’s support in Longman came mainly at the expense of the Coalition’s candidate. In a field of eleven nominations, the next best vote was the Greens’ 4.8%.

There is residual irritation in the wider electorate about voters’ circumstances and about a perceived disconnection from their elected representatives. This alienation was again apparent in the Longman result, and signals a warning to both major parties about volatile voter sentiment in Queensland and elsewhere.

The high One Nation vote came after a more concerted and less gaffe-prone campaign, despite candidate Matthew Stephen facing persistent queries over his business history. This was achieved in the conspicuous absence of Pauline Hanson’s “star power” (dozens of cardboard cut-outs of the party leader notwithstanding).

But these circumstances are possible at a byelection more so than a general election, where One Nation’s modest resources are typically stretched. It may be that the party concentrates its federal campaigning and nominations on fewer seats so as not to spread itself too thinly (as it found to its cost at the recent Queensland election).

The way the party suggests its voters direct their preferences is regularly a mystery, as is how closely its voters follow those recommendations. But if One Nation focuses on the marginal seats in Queensland, it could place itself in an influential position with the government on policy negotiations ahead of the next federal election.