It’s hard to believe, but in 2018 the vast majority of graves of Aboriginal people in remote Northern Territory communities are not recorded in any register. When someone dies they are buried, but there’s no written record of which grave belongs to whom.

Virtually every member of the remote Aboriginal community of Barunga in the NT has a relative lying in an unmarked grave in the local cemetery – but they don’t know exactly where they are. For Jasmine Willika, it is her sister and grandmother. For Joyce Bulumbara, her father. For Isaac Pamkal, his father and grandmother. 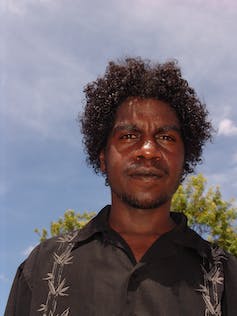 The identity of the person buried in an unmarked grave is remembered by loved ones for some time. Plastic flowers may mark it, until they erode. But there was no cultural tradition of headstones, or money to pay for them even if there had been. (In traditional burials, a person’s bones were put in a lorrkon and placed in a cave.)

After a while, people forget who is buried where. In time, the remembering generation also dies. So, the identities of people in these graves become more and more blurred.

This makes it difficult to mourn properly, or to care for that person by caring for their grave. And there are other distressing ramifications. In 1998, there were record floods in the region. In the neighbouring community of Beswick/Wugularr, a number of coffins rose to the surface. No-one knew who was in them.

In the past, the dead have also been accidentally unearthed at Barunga by those digging new graves. Today, family members select grave sites after consulting the Junggayi, the senior traditional custodian.

This is a Territory-wide problem: the result of structural racism. Like the infamous Northern Territory National Emergency Response of 2007, race-based discrimination is enacted through geography. While the graves of people in major towns must be registered, it has not been compulsory to record the location of graves of Aboriginal people in remote areas. The situation dates back to 1890s laws enacted when the South Australian government administered the NT.

A spokeswoman for the NT government has said new cemeteries legislation is being drafted and will be available for public consultation in October this year. “The new legislation will have similar requirements for urban and regional cemeteries,” she said. 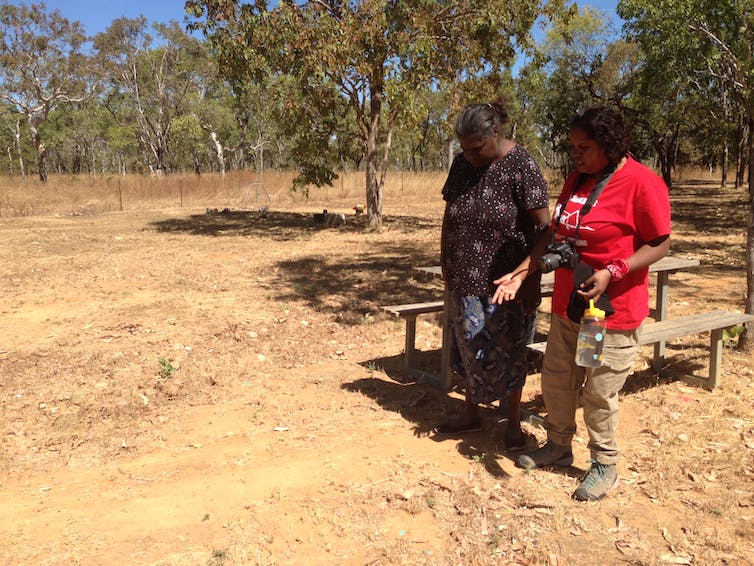 Jasmine Willika (right) with her mother, Rachael Kendino, try to identify graves at Barunga, which include Jasmine’s sister and her grandmother. Photo: Claire Smith

However, remote commmunities need money to employ people to record graves. “The government needs to allocate resources to solve this problem,” says Barunga resident Helen Lee. “It is not going to solve itself. Across the Territory, there has been 150 years of neglect.”

In the meantime, graves must be identified. While some remote communities are tiny and/or recent, others have been around for more than 100 years. The bigger ones could have hundreds of unmarked graves.

A community calls for help

In April this year, community elder Guy Rankin called Claire Smith and Gary Jackson asking us to record the Barunga graveyard. We had undertaken this work in 2013, in response to a community request, but the work needed updating. In June, Roper Gulf Regional Council, which has administrative responsibilities for a number of remote communities including Barunga, also contacted us. Our task was to number the graves at Barunga cemetery and record biographical details of the deceased as told to us by community elders.

To ensure this information can be passed on to a local authority, we developed a map and recorded archaeological information about each grave, such as the ornaments left by family members.

The community of Barunga was established in 1951. Prior to that, Aboriginal people in this area were mostly hunter gatherers. Though traditional burial practices, like lorrkon and rockshelter burials, persisted for many years after Aboriginal people moved into communities, over time cemeteries became the norm. We estimate that the first burials at Barunga occurred in the 1960s. People were wrapped in cloth or calico. Coffins came later.

This year we (and students from the Community Archaeology Field School) recorded 174 graves. Only 25 of these have plaques identifying them as belonging to a particular individual. Our research team encompasses both university staff and people from the community, including Jasmine Willika, who is studying archaeology. 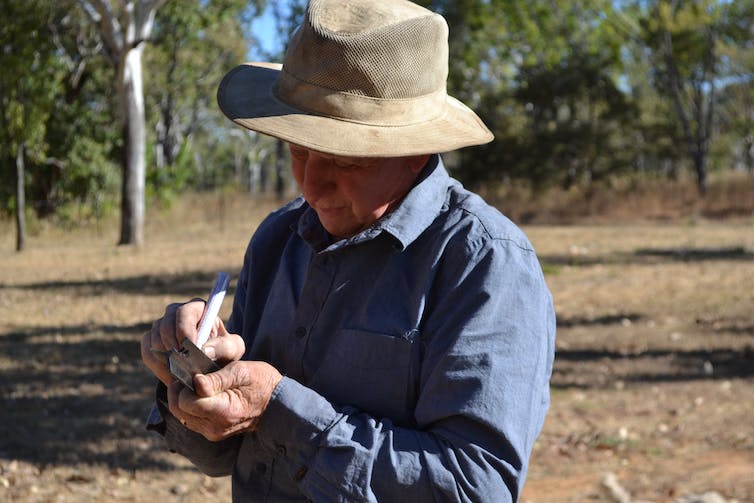 The first step is to number each grave and mark it with a star picket. We then visit the cemetery with community members, trying to identify who is in the unmarked graves. This complex process is repeated many times, with different people. They will likely remember recent deaths within their family, but after ten or so years it becomes harder to be sure that this person is in this exact grave, not the one next to it — or over a little.

Sometimes, one person’s memory will spark that of another. We record whom identified who with a particular grave. If the same identification occurs a number of times we feel secure in putting a name to it. This cross-checking is essential to the reliability of the data.

So far, we have identified 30 individuals using this process. That leaves 119 still unknown. After identification, we record a deceased person’s moiety, clan and kinship relationships. 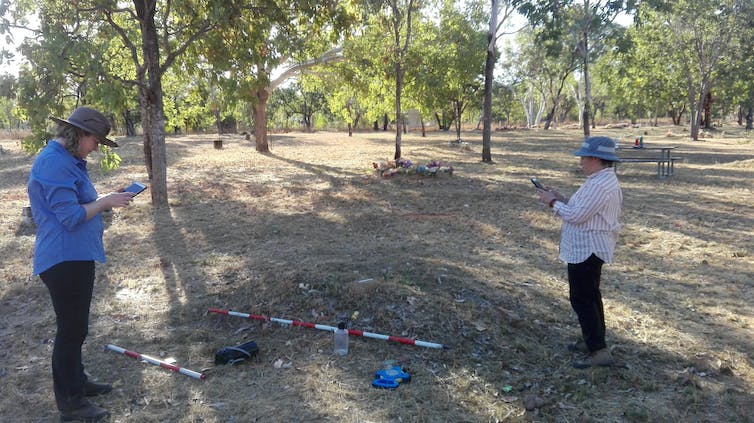 It is a challenge to catch everyone, as these are mobile communities. Though there is a small shop at Barunga, it’s expensive. People regularly go to Katherine to shop or deal with government agencies, or travel to other communities to visit relatives — or attend funerals.

We record the dimensions of the grave, its orientation and stylistic features on a tablet, in a form that has the capacity to act as a burial register. We hope to fill in some blanks with information from official death registers. If we are able to “bracket” a grave with the names of people on either side, we can cross-reference the death dates of those people with other community deaths registered at that time. However, it is too late to identify many of those buried in the early graves. 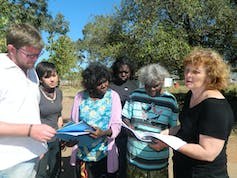 So far, we have only identified graves from their surface appearance. Our next step will be using ground-penetrating radar in the older parts of the cemetery. The ground in these sections is mostly flat. However, the radar can identify anomalies where earth has been disturbed. This will make it possible to respect individual graves, even if the people in them cannot be identified.

When our work at Barunga is completed there will be a recording system in place and a burial register managed by local Aboriginal people. This will help in planning the location of future graves. The community plans to place headstones on each grave, with those on unidentified graves perhaps identifying them as belonging to a Barunga elder.

We have also established a research group, called Grave Concerns, and plan to work in other communities, training Aboriginal people across the NT in recording graves.

Today, Aboriginal burial practices at Barunga include elements of both traditional and Christian belief systems. Usually, there is a Christian service in the Barunga church.

It is normal practice for a dead person to be brought to the community the day before. The coffin is placed in a bough shelter built for the occasion. It is wrapped in yellow and red cloth. This complies with the cultural rule that the light colours of the Yirritja moiety should be joined with the darker colours of the Dhuwa moiety. During the night and in the morning, family members spend private time with the deceased. 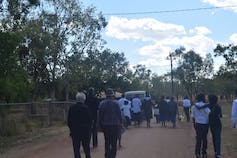 People walking to the Barunga cemetery for the funeral of W. Willika in 2015. Photo: Claire Smith

Barunga has a population of around 350 people. Virtually the entire community walks to the cemetery. People dress in black and white. At the grave, the songs are normally Christian, but Aboriginal in enactment. The songs are sung in Kriol, accompanied by elegant hand and arm movements that expand on, or embody, their meanings. There may or may not be a pastor. 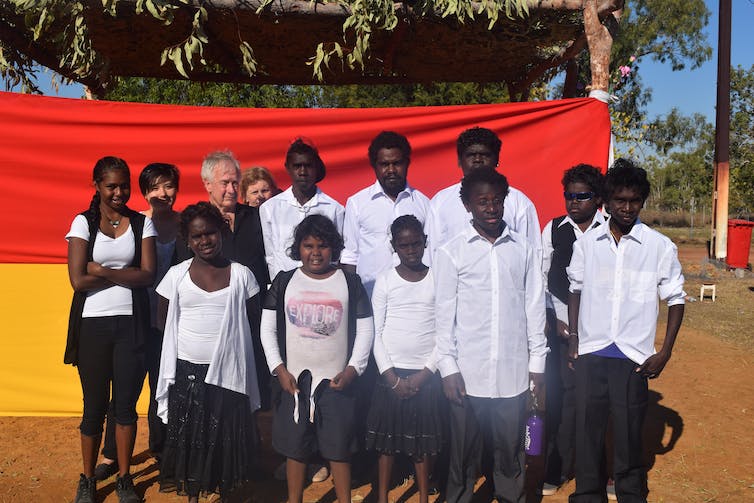 Close family members and friends of W. Willika prior to his burial at Barunga cemetery in 2015. Photo: Matthew Ebbs

For Jasmine Willika, the quest to identify remote graves at Barunga is deeply personal. “This is my family, my blood,” she says.

My grandmother, Lilly Willika, was a very strong cultural woman. When I hear about her, I feel like I can follow in her footsteps. I have cultural knowledge passed down from her. That helps in doing archaeology.

Her grave is at Barunga cemetery, but I don’t know where. I want my children’s children to know where they can find my old grandmother and other family members.

Photographs published with the permission of Traditional Owners and Custodians.