Around the world, at least one in seven homicides are committed by a current or former intimate partner. In the United States, estimates suggest that, each year, a child may be more likely to lose a parent (the mother, in most cases) to intimate partner homicide than to be diagnosed with leukaemia.

Many of these children witness the killing or its direct aftermath, often involving graphic scenes. Some try to intervene in whatever way they can. A young boy I worked with yelled as loudly as he could to alert the neighbours, without success.

Children of those involved in intimate partner homicide experience an extreme lack of control in the situation. That’s why – to restore control as much as possible – it’s important to take their opinion seriously in later decisions about their future. This isn’t only crucial for mental health – it’s a child’s right, as acknowledged by the Convention on the Rights of the Child, to participate in decisions about their life.

Our most recent study, conducted in the Netherlands, sought to describe the background, circumstances, mental health and well-being of children bereaved by intimate partner homicide. We did so by cross-examining eight different data sources and conducting in-depth interviews with young people and their caregivers.

For many children, the homicide happens at an age when the concept of death is hard to grasp: two-thirds of the children bereaved between 2003 and 2012 were younger than ten years old at the time. Yet, on top of the direct grief and distress, these children are suddenly thrown into the confusing situation of being the child of a murderer and a victim.

Read more: Adults can help children cope with death by understanding how they process it

And there are many decisions to be made about their future. The most pressing question is often where he or she should live. If with the family of the victim, there’s concern about whether these caregivers are emotionally available enough while grieving themselves.

On the other hand, the family of the perpetrator may be going through their own emotional turmoil, plus the family of the victim may resent a child living there. And in the case of a neutral foster care family, there are questions about whether it wouldn’t be easier for the child to live with people they know. 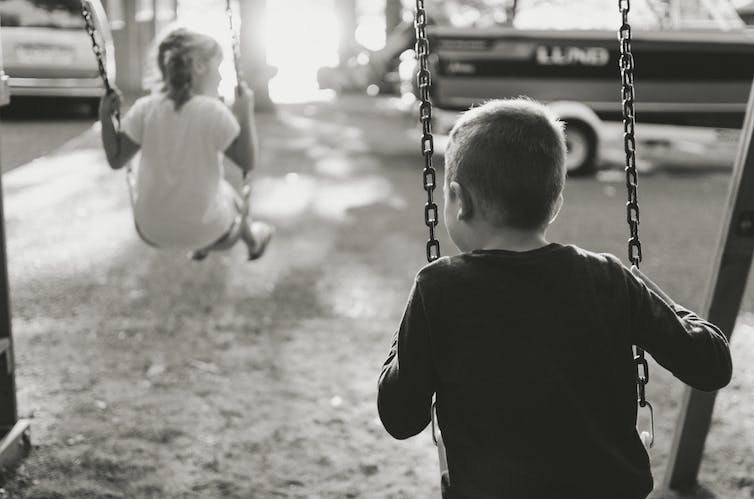 Children have a right to participate in decisions about their future. Kelly Sikkema/Unsplash, CC BY

We know little about what young people think of these issues themselves. Only a handful of empirical studies in the past decade have explored the issue – almost none outside the US or the UK. Our Dutch study included interviews with 23 children and young people whose parent had been killed by an intimate partner.

Our young participants were eager to talk; we often didn’t have sufficient time to discuss all their views in depth. Our key finding was that, while there were some trends, there was no single common perspective.

For example, some children were glad they had been placed with people they knew and trusted. But one girl felt that her unrelated foster family had probably given her more opportunities than she would have had with family members.

Most children appreciated being asked for their own opinion about their living arrangements by child protection professionals. As one said:

I think they [child protection] asked me every year what I wanted. And every year, I could give my opinion… I like that they do that. You hear so many strange stories these days, I think I have been lucky, stayed with family and had a good home. I think it’s good that you can give your opinion about that as a 12-year-old. That you already know, say, what is normal and what is not normal.

And many children knew what they wanted or did not want:

If my dad expects me to go live with him after he’s released from prison, I’m definitely not going to do it.

Children also had varying opinions on whether they wanted to have contact with the perpetrator-parent in prison. For example, some children wanted to get answers to questions about their deceased parent, while others did not want to have any interaction. One child wondered whether she had contact just for the sake of the parent, not for herself.

The fact that children want to participate in these decisions about their life and don’t always share the same viewpoints (even between siblings) is important information for decision-makers. It means standardised solutions or pathways aren’t the most effective method of supporting these children.

Many children experience strong grief symptoms and post-traumatic stress after parental intimate partner homicide. Considering their level of exposure and already heightened vulnerability – the case files in our larger study suggested more than 80% of children had experienced previous domestic violence – this is not surprising.

When asked, young people had various tips for others bereaved by homicide. Several talked about feeling supported by therapy and by their caregivers. For example, one girl said, when asked about her recommendations for others:

Therapy actually. Yes. Telling your caregivers what you’re struggling with… There was a time that I thought about suicide, and I found it very hard to say it so I’ve written it down for my caregivers. I came out of that [period] together with them, and with the help of my therapist. They also knew about it, that has really helped me.

Finding out that they were not alone was helpful for a number of the children. But again, not everyone shared the same view. For example, some children wanted to meet peers who had been experienced something similar, while others said they were not interested.

Taking the time to ask what children and young people need gives them an opportunity to influence their own lives. And, as an Australian young person outside the study commented, to keep checking in over time is important too. She said she initially didn’t want to connect with peers but recently changed her mind.

Several scholars have talked about the risk of no, or only tokenistic, participation of children in child protection decisions, leading to children not receiving adequate support, protection and mental health care. Our findings suggest young people are both able and willing to talk about these fundamental aspects of their lives.