Could you please tell me how many dinosaurs in total lived on Earth during all periods? - Viren, age 6, Scotch College, Victoria.

This is a really great question.

The short answer is we know of about 900 valid dinosaur species that existed. “Valid” means scientists know the dinosaur from enough of the skeleton bones to feel pretty sure that it differs from all other known dinosaurs. There are hundreds of others which have been named, but are not considered “valid” as they were not based on well-enough preserved fossils.

To give you the long answer, first I need to explain what a dinosaur is, and when they lived.

What exactly is a dinosaur, anyway?

Dinosaurs were a group of medium to large reptiles that lived between 235 million years ago and 66 million years ago. Not many people know this, but the main thing that makes a dinosaur a dinosaur is their foot structure; they have a special kind of ankle joint. Their feet bones are like that of a bird.

Just how many dinosaurs in total lived on Earth during the Mesozoic era is impossible to answer. One study by a Polish scientist called Jerzy Trammer estimated that the total dinosaur combined weight was greater than all the mammals on Earth today, but their individual numbers were much lower than species of today’s living mammals.

Read more: Curious Kids: will the universe expand forever, or contract in a big crunch?

Megalosaurus was one of the first dinosaurs to be properly studied. It lived in the Jurassic Period, about 160 million years ago.

The English scientist Richard Owen created the word “dinosaur” in 1842, meaning “terrible lizard” because at the time he thought they were similar looking to large lizards. Today, we know they are not lizards, but a totally different kind of reptile. 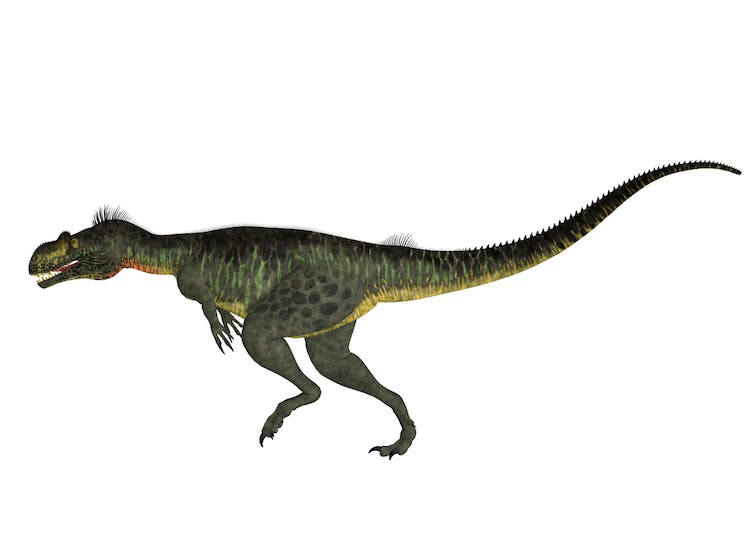 I discovered a new dinosaur based on one bone in the museum collection in Perth. It came from the Geraldton region in Western Australia. It is Australia’s only named Jurassic theropod. I named it Ozraptor, meaning “the Lizard of Aus”.

As the fossil record of life is vastly incomplete, we can only guess that many, many more species existed - but we might never find their fossil remains.

At least we know that many new dinosaurs will continue to be found as expeditions keep going out searching for them every year. Most of the world’s new dinosaurs are coming from China, Mongolia and South America.

I’m really glad you are interested in dinosaurs. Who knows - maybe one day you will be part of an expedition that discovers a new dinosaur. If you found a new dinosaur, what would you name it?