An adult from the north coast of New South Wales is the latest Australian to be diagnosed with the deadly infectious disease, diphtheria. The patient, who was diagnosed on Monday, is being treated with antibiotics and health authorities have followed up all contacts.

Few doctors and nurses in Australia have ever seen the disease, yet recent cases and a death remind us how dangerous this disease can be, and the importance of immunising against it.

Diphtheria vaccine (in combination with tetanus and pertussis - also known as whooping cough) is offered free to all children at two, four and six months of age. Three booster doses are recommended at 18 months, four years and around age 12 years in the national school-based immunisation program. Adults are also recommended to catch-up on vaccination if they missed out as a child.

Read more: Forget 'no jab, no pay' schemes, there are better ways to boost vaccination

Diphtheria is caused by toxin-producing strains of the bacterium Corynebacterium diphtheria and Corynebacterium ulcerans, which mostly affects the throat and airway. It causes grey and white patches on the tonsils that can form a membrane and make it difficult to breathe.

This respiratory form of the infection can also cause massive swelling of the neck, known as “bull neck”. Heart, kidney and neurological complications can follow.

Diphtheria commonly spreads from person to person through spitting and coughing. A less serious form is skin sores, but the infection can also spread through these painful skin lesions.

Patients are treated with antibiotics to clear the bacteria and stop toxin production and limit the spread of bacteria to others.

The disease-causing bacteria was discovered and identified in 1884 by German bacteriologists.

The disease was incurable until Emil von Behring showed that giving patients serum from animals previously infected with diphtheria, known as antitoxin (antibodies to the toxin produced by the bacteria), could save their lives. He posthumously received the first ever Nobel Prize in Physiology and Medicine in 1901.

Once diphtheria antitoxin was available, the number of cases of diphtheria dropped, but it was still a massive killer. In the United Kingdom in 1945, around 9,000 children died of diphtheria, compared to 8,000 due to bombing.

The discovery of a vaccine against diphtheria in 1923, and the development of the combination vaccine for diphtheria, tetanus and pertussis (DTP) in 1948 is one of the greatest public health stories of all times.

In the early 1970s, prior to widespread immunisation, there were around one million cases of diphtheria worldwide each year.

Forty years later in 2016, 86% of children worldwide had received three doses of the vaccine by the age of one and the number of cases dropped to just over 7,000.

These successes and the decline in cases almost led to diphtheria being a “forgotten disease”.

Large-scale outbreaks of diphtheria have been reported in Haiti in 2014, Venezuela in 2016, Yemen in 2017, Indonesia in 2017 and among the displaced Rohingya population in Cox’s Bazar, Bangladesh in 2017. 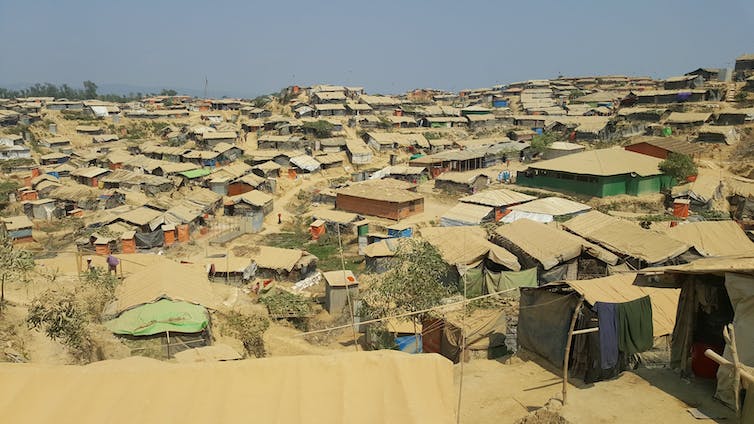 These outbreaks are largely preventable and are a result of failing health systems and immunisation programs. Low immunisation coverage for three doses of diphtheria vaccine of 63% in Haiti, 59% in Venezuela, 60% in Yemen and 62% in Myanmar, was a common factor.

The outbreak of diphtheria in Indonesia tells us that low and incomplete immunisation, along with several other factors, also contribute, including increasing antibiotic resistance, vaccine distribution issues and population mobility, as well as people’s perception of vaccines.

A similar epidemic occurred across former states of the Soviet Union in the early 1990s following dissolution of the USSR, when immunisation levels plummeted.

But case counts have risen in recent years, with 31 people affected since 2011. While some had the milder form of skin sores, deaths from respiratory diphtheria were reported in 2011 and in 2018, both in young adults who were not immunised.

Overall, Australia has achieved high diphtheria vaccine coverage, with more than 94% of children vaccinated. This helps provide herd immunity against the disease.

The risk of diphtheria comes from these recent multi-country outbreaks and pockets of low vaccine coverage in Australia. Local cases in regions with historically low vaccination rates in children (less than 90%) stress the importance of catching up adults who may have missed vaccines in childhood.

The diphtheria vaccine is safe, effective and funded under the National Immunisation Program.

These recent cases are a reminder of why we need to continue to vaccinate against disease now considered rare in Australia. They also underpin the importance of Australia’s contribution to strengthening of health systems and immunisation in the region.