One of the most striking features of Jupiter – a gaseous giant with no solid surface – is the coloured bands that encircle the planet.

These bands are so large and distinct that they can be seen from here on Earth using a modest telescope, and thus have fascinated astronomers since the era of Galileo.

In research published today in The Astrophysical Journal, Jeffrey Parker, from Lawrence Livermore National Laboratory in the United States, and I have developed a theory that could help explain what is going on beneath these bands and why they only go so deep into the planet. 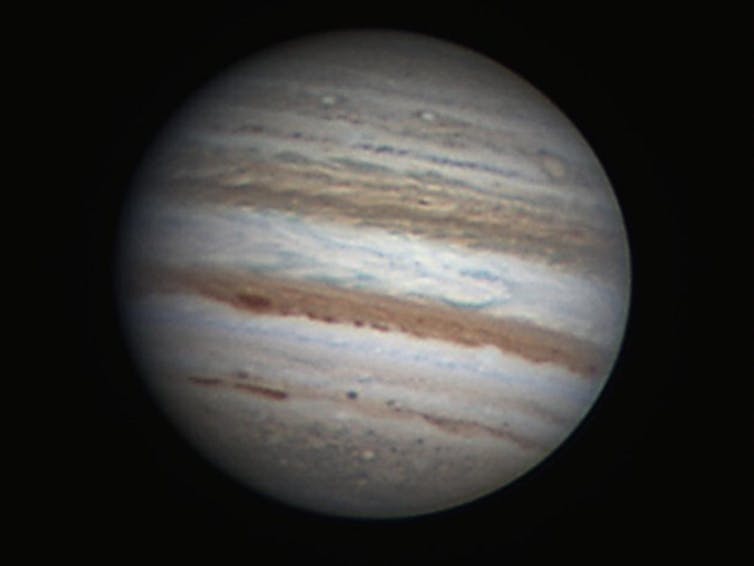 The bands of Jupiter captured by an Earth-based astronomer. NASA/Freddy Willems

These bands are actually strong steady winds, or jets, that flow in Jupiter’s atmosphere, carrying with them clouds of ammonia and other colourful elements. These jets are similar to the jet streams that flow high up in Earth’s atmosphere.

But there is more to these jets than meets the eye. What goes on below Jupiter’s clouds is, to a large extent, still a mystery.

Although there exist many theories for how the jets on Jupiter form and how deep they penetrate beneath the clouds, until recently we had no direct observations to support them.

In mid-2016, NASA’s spacecraft Juno headed to Jupiter with a mission to approach the planet closer that any probe has done before. It reached distances of less than 4,500km above Jupiter’s clouds at its closest approach (about the distance from New York to Los Angeles).

When the data started pouring in, it was found that the jets go as deep as 3,000km beneath Jupiter’s clouds, and then terminate. (This is about 5% of the planet’s radius at the equator.)

Only so deep for Jupiter’s bands.

This created a new puzzle for scientists: why do the jets penetrate as deep as they do, but no deeper?

Here is where our research comes into the picture. We have developed a theory that explains how magnetic fields have a tendency to shut down the jets.

What does this have to do with Jupiter?

Inside the gas giant

Jupiter’s gaseous bulk consists mostly of hydrogen and helium. As you go deep beneath the clouds into the interior, the pressure of the gas increases (similar to how the pressure increases when you dive deep into the ocean here on Earth).

Scientists understand that at about 3,000km below Jupiter’s clouds, the pressure is so high that electrons can get loose from the molecules of hydrogen and helium and start to move around freely, creating electric and magnetic fields.

Is it just a coincidence that this happens at about the same depth that the jets break down? Scientists speculate that it is not. As Steve Levin, Juno project scientist at NASA’s Jet Propulsion Laboratory, explains:

It’s very interesting that (the jets disappear at) about 3,000km, because that’s about where it might be conducting electricity enough to make a magnetic field.

So, it could be that the magnetic field has something to do with why the belts and zones only go that deep (…) But we don’t know this yet; this is just speculation.

Here is how our theory ties in. Using principles from statistical physics of turbulent systems, we devised a mathematical model which predicts that when magnetic fields are strong enough, the jets shut down.

Specifically, within our model a jet organises magnetic fluctuations in such a manner so that the coherent effect of these fluctuations acts to dampen the jet itself.

This offers a partial explanation as to why the jets terminate at about 3,000km below the clouds.

It’s hoped that theory and observation together will continue to give deeper insight on the physics of the universe as Juno and other probes, such as NASA’s new Parker Solar Probe, explore and gather data from our Solar system and beyond.