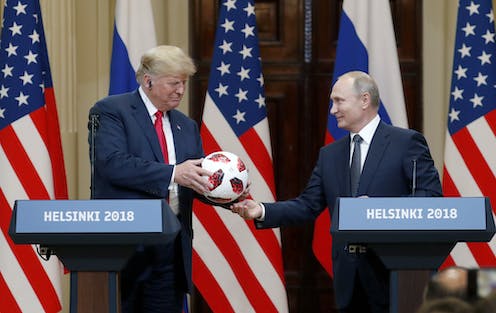 In a now famous Fox News interview with Donald Trump in February 2017, Bill O’Reilly asked the new US president if he respected his Russian counterpart, Vladimir Putin. The following discussion ensued:

Trump: Well, I respect a lot of people but that doesn’t mean I’m going to get along with him.

O’Reilly: But he’s a killer though, Putin’s a killer.

Not a few viewers in countries on the wrong end of US foreign policy may have had to stop and catch their breath at Trump’s final sentence. A common thread of so many of their experiences of US foreign policy is not only the bombing from above. Many share a deep repugnance toward what they see as a well-manicured facade of American moral superiority, which helps to frame, water down or justify the violence and humiliations to which they are regularly subjected.

Read more: Why the world should be worried about the rise of strongman politics

Just for that breathless moment, it seemed this sentence of moral relativism tore a hole in this façade and threatened the moral protection it provides to members of the American establishment.

It is these elected politicians from both major parties, military, state department and security officials, spies, advisers and lobbyists who have reacted most vociferously to Trump’s moral relativism in international affairs. This was perhaps most evident in his accommodating attitude to Putin in general, and especially in Helsinki last month.

In the blanket and largely uncritical Western news coverage of the establishment’s expressions of outrage, commentaries and interviews in response to the July meeting, Trump was depicted as a traitor to the US, Putin’s puppet and now even a greater threat to US national and, indeed, international security.

They may or may not be correct on some or all counts. But it is worth examining exactly what or whom Trump was betraying in Helsinki. So what did Trump do? He accepted uncritically (then later awkwardly back-tracked) Putin’s denial of election meddling and adopted much of his critique of US foreign policy over the last couple of decades.

As far as we know, Trump did not even interrogate Putin over his deadly meddling in Ukraine. He may not be particularly interested. In the lead-up to Helsinki, Trump trash-talked old US allies (including NATO).

Taken together, this conduct exacerbated the establishment fear that Trump was threatening to dismantle well-established Western political structures geared toward containing Russian influence carried over from the Cold War. These structures have been essential to cementing a broader post-Cold War US unipolarity. This has given the US political establishment a free hand to pursue its foreign policies without much restraint but with terrible consequences for those affected in, for example, the Middle East.

I doubt Trump is pursuing a grand strategy to unravel these structures, especially when his rhetoric displays a penchant, even a fetish, for the US unipolarity these strategies help foster.

Furthermore, his rhetoric has not really translated into significant foreign policy changes so far. Much of it is meaningless. But there is whole body of scholarship and commentary that would encourage Trump in any dismantling efforts, as it argues that the carrying over of Cold War structures of Soviet (Russian) containment such as NATO after 1991 have stood in the way of the development of more peaceable relations between Russia and the West. Indeed, structures like NATO fuel Russian anxieties and aggression, which NATO was founded to combat.

More traditional scholarship disputes these “revisionist” ideas, citing Russia’s aggression as evidence of the indispensability of containment to international security.

Scholars on both sides can find evidence to support their arguments in Russia’s annexation of Crimea and military intervention in Ukraine. But these revisionist ideas, or even the debate with more traditional ones, were hardly mentioned in the blanket media outrage over Helsinki. Critically, then, an examination of the object of Trump’s supposed “treachery” was also lacking when it was most needed.

Read more: As Trump meets Putin, expectations may be high but the prospects are poor

The focus on outrage may just be the reality of covering an outrageous president in politically sensitive times. In any case, an issue remains for us in Australia to re-examine our own approach to Russia.

This could mean advocating a “new” revisionist or “new” traditional approach toward Russia in response to its conduct, especially in Ukraine. But it would also mean at least trying to untangle the latter from the broader implications of supporting American unipolarity and, hopefully, avoiding its consequences.

This larger project beyond Russia is worth pursuing, if not for the sake of those who suffer its consequences around the globe, then at least for our own. Mass population dislocations, food shortages, terrorism and economic disruption threaten more than ever to reverberate all the way from those far-flung borders straight to our doorstep.