Melodie Reynolds-Diarra’s Skylab, a Yirra Yaakin and Black Swan coproduction staged in the Studio Underground at the State Theatre Centre, opens to the strummed chords of David Bowie’s 1972 hit Starman. This is a fitting entry into a play that deals with the belief that some outside source will provide the answers to our problems, and that our dreams may come true, if we only wish hard enough.

It is July 1979. An Aboriginal family, Nev and Jem, their three children, and Uncle Harvey live in a farmhouse out of town. Money is tight, the fridge is empty, Nev is owed backpay, and Jem struggles to feed her children. The children’s grandmother, Nan, subtly played by Rayma McGrath Morrison, and absent for most of the play, opens and closes the proceedings.

The parents deal with their situation with stoicism and humour, and the three children engage in their fantasies when role playing episodes from the late-1970s’ television series Monkey. The Buddhist philosophies espoused in the series contain a pertinent message of the play - be careful what you wish for.

When the American space station Skylab scatters much of its debris near the town of Esperance, it brings the gift of wishes that can be fulfilled. Nev gets his backpay plus a “sorry” from his boss, the fridge is magically filled with food, French champagne is on hand. Magic indeed happens, but it’s too easy. 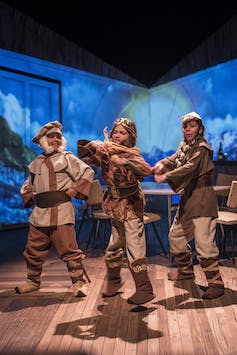 The Studio Underground space is excellently utilised. We look into the interior of a house containing the spaces for kitchen, lounge and bedroom without the need for walls. To one side stands a corrugated iron shed, Harvey’s domain. Sound and lighting are also employed creatively throughout, the first half closing with a series of deafening sonic booms and flashes of light as Skylab disintegrates above the farmhouse. A range of eclectic but fitting music choices reflect the period, aiding Nev’s funky dance moves.

There are strong performances from Laila Bano Rind as Jem and Alan Little as Nev, both playing lightly into the humour of the play, as well as later showing the strains of their embracing of the American Dream, another “gift” that Skylab flings into their environment and culture.

The children, Eva Bartlett as Amy, Donnathia Gentle as Sonia, and Jacob Narkle as Nate, are integral to the performance, and serve the play well in their lively engagement with their roles.

Gary Cooper offers a powerful performance as Uncle Harvey, consumed by an anger concerning the past treatment of his people. Obsessed with the approaching Skylab, he is convinced that some conspiracy, perhaps underpinned by biological warfare, will be unleashed when the spacecraft crashes. He rails against the injustices of white possession and oppression but appears to be tied into a past that Nev and Jem have moved on from, in spite of the prejudices they encounter on their trips into town. 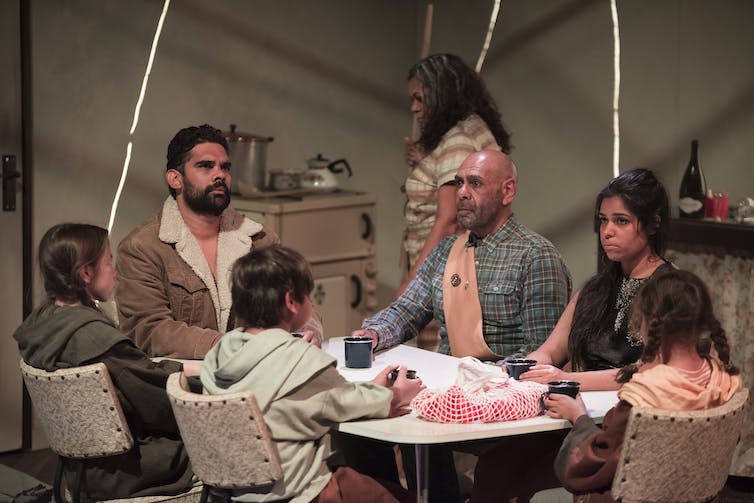 The family around the dinner table. Dana Weeks

Towards the end, lighting jumps almost chaotically between vignettes on the stage as we witness the outcomes of Skylab’s “gifts”. We see the children, now dressed in the authentic costumes of their Monkey characters, standing upon an upturned sofa, which serves as the cloud on which they travel. We see Uncle Harvey, suggesting a dictator figure in his presidential sash with his arm raised in what looks like a Nazi salute. Jem and Nev (dressed in a 1970s Elvis costume), are joined in a Vegas-style wedding presided over by a James Brown inspired preacher.

The moral lessons are clear. Uncle Harvey is imprisoned in his anger. Jem and Nev, reclining on their banana lounges, sipping champagne and dealing with their stockbroker, are corrupted by their American dream. Only the children appear to have found happiness in their wishes.

But help is at hand in the character of Nan, who appears as the Buddha during a sequence where the children enact their Monkey characters, imparting wisdom and warnings. When she returns at the end she brings a healing back to the family as they sit around the kitchen table, seemingly stunned by their experiences and the lessons they might have learnt. 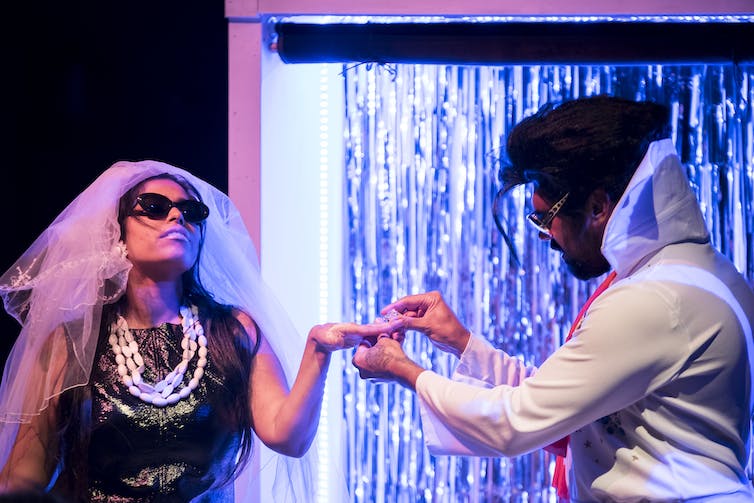 Kyle J Morrison’s direction is assured and economical. He states, quite aptly, in the program notes, “consciousness and spirit are central to this story”. Melodie Reynolds-Diarra relates how she came to compose the play after acting in a string of performances that focus on the injustices imposed upon Indigenous Australians in the past and the present. She recognised a need “to break the programming of fear” and offers Skylab as fulfilling a desire to tell a “good yarn and to see people laugh”.

The play ably fulfils these aims and the opening night audience responded warmly to the performance. Following its Perth season, the production will tour to Karratha and Carnarvon.

Skylab is being staged at Black Swan Theatre until September 2 2018.